I have some News - I'm Getting Married!

I have some News - I'm Getting Married!

It's been a while since I've had some happy news around here, so I'm so excited to share some with you today. On Wednesday of this week (October 2nd) my partner of so many years finally asked me to marry him and I said YES! We're finally going to get married.

I am absolutely over the moon right now. I am so happy!

So, how did he Propose? I can hear you shouting:

Wednesday morning started out a little different than most as he left me in bed whilst he did the school run. It was my day off work for this week, so I was more than happy to accept. Upon his return he woke me up around 11am with a beautiful bunch of flowers in hand which was so sweet and so unlike him. I should have guessed then that something was up but I didn't. I got up as normal and headed downstairs to slob in front of the TV in my dressing gown, nothing unusual about that. BUT about half an hour later there was a knock at the door and even after shouting at him to "Get It", he was nowhere to be seen so I had to get up and get it myself. There at the door I was handed a giant box with my name on. I was so intrigued but so unaware. He must have reappeared quietly as I was excitedly opening the box cus as this giant balloon filled with rose petals floated out of the box with the most beautiful words I had even seen scribbled across it, "Will You Marry Me?" Of course I said YES! 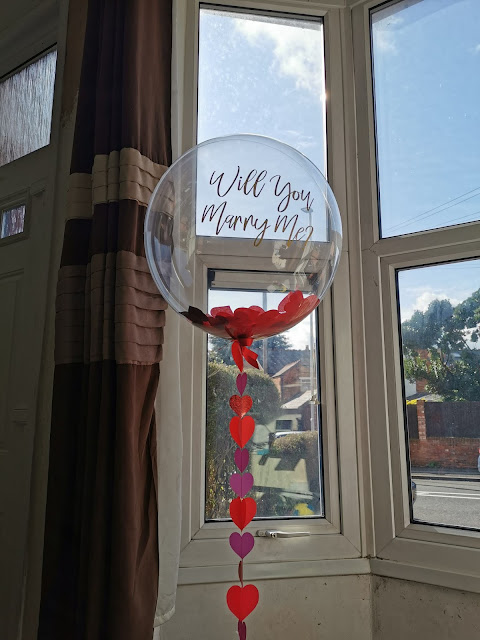 We'd talked about marriage a lot over the last few months (and years) as he knew it was something I really wanted to do one day. We've been together for many years and have two beautiful children together so for me, it was the natural next step for our relationship.

The children were so excited when we told them, they're so happy that Mummy and Daddy are getting married. Lily even cried when she found out, she's excited about her dress.

It's been a dream of mine since I was a little girl to have a big Fairytale Wedding with all my family and friends around me so I'm so excited to get started on the planning although with the budget we have it may be a small fairytale wedding more than a big one, but that's OK.

We're hoping to get the ball rolling real soon and see what we can arrange. I'd like a warm wedding so September next year would be my ideal date but with that being just under a year away, I'm not sure how realistic that would be. I'm excited to find out though - eek!

I will be hopefully sharing lots of my wedding planning with you over the next year so if that's something you're into, then do stay tuned and follow our little families wedding journey.

"I'm Getting Married!"
Posted by Christine Taylor at 02:10