School of Rock – The Musical at The Alexandra Theatre Birmingham #Review

School of Rock – The Musical at 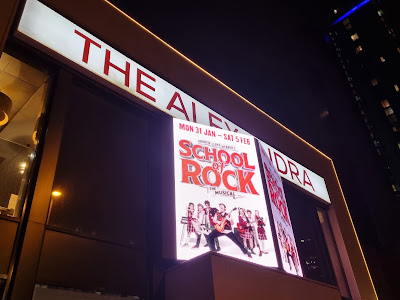 Tonight was the opening night and press night of School Of Rock the Musical at the Alexandra Theatre in Birmingham. And, Wow what a night it was! Birmingham was rocking!

This Andrew Lloyd Webber, smash hit, Olivier Award winning West End show comes to Birmingham from today for one week up until Saturday February 5th. Based on the hilarious hit movie, this new musical follows Dewey Finn, a failed, wannabe rock star who decides to earn a few extra bucks to pay the rent by posing as a substitute teacher at a prestigious prep school. There he turns a class of straight A students into a guitar shredding, bass slapping, mind blowing rock band – sensationally performed live by the production’s young actors every night with roof raising energy! It's a high energy masterpiece the whole family will enjoy. 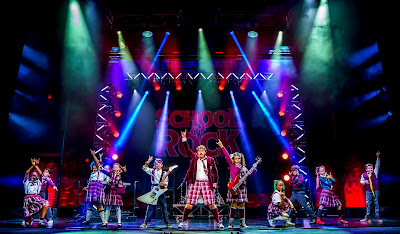 The kids up on that stage tonight were absolutely incredible. Full of energy, full of life and full of talent. They commanded that stage, holding every audience member in the palm of their hands. One of three incredibly talented teams of 12 children will perform live alongside Dewey each night and will stick it to the man when the bell rings for the new school term in September. Each and every one of them doing an amazing job. Rocking that stage proudly. 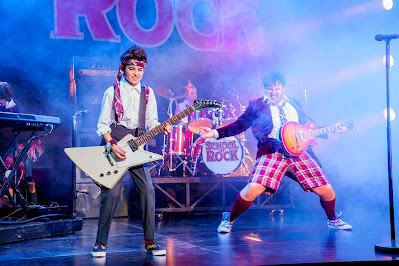 Jake Sharp is getting the band back together and will lead the cast as Dewey Finn having previously performed the role in the West End. Alex Tomkins will also perform in the role at certain performances. They are joined by Rebecca Lock as Rosalie Mullins, Matthew Rowland as Ned Schneebly and Nadia Violet Johnson as Patty Di Marco.
Jake Sharp was amazing, I don't know how he had so much energy. Jumping around that stage all night long and rocking out to the music. He was so good and so funny too. I loved that this show had great jokes thrown in, real funny stuff and laugh out loud comedy. There was a few 'naughty' words too but all in good taste and totally allowed in Rock School. 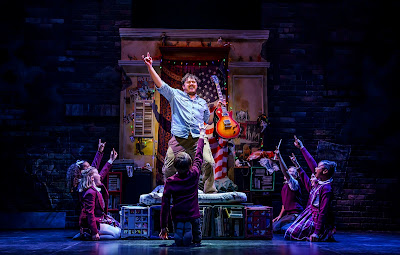 The remaining adult cast comprise Ryan Bearpark, James Bisp, Joanna O'Hare, Samuel Haughton, Tom Hext, Harveen Mann, Richard Morse, Annell Odartey, Amy Oxley, Helena Pipe, Michaela Powell, Richard Vorster and Craig Watson. All of whom were fantastic.
School of Rock - The Musical debuted at Broadway’s Winter Garden Theatre in New York in 2015 and ran for more than three years, picking up four Tony nominations along the way.  It transferred to London in late 2016 and ran for more than three years at the New London Theatre, winning an Olivier Award for Outstanding Achievement in Music.
For the production’s first UK and Ireland tour, Christopher Key takes the reins as Associate Director, Maria Graciano is Associate choreographer and Musical Supervision is by Matt Smith. Adam Fisher and Stuart Porter complete the team as Associate Sound and Lighting Designers. The UK & Ireland Tour of School of Rock – The Musical is produced by David Ian for Crossroads Live by arrangement with the Really Useful Group.
This show is an absolute delight. The live music fills the room and really gets everyone rocking. I was toe tapping and clapping along throughout and had an amazing time. The kids playing those musical instruments live on that stage really made my night. I felt like a proud mum watching them, and they wasn't even my kids so imagine how they're real patents felt.
This feel good, feet stomping spectacular is one not to be missed.
School Of Rock - The Musical is only in town for one week only before it'll be moving onto Milton Keynes and all across the UK. Wanna see it? Then check  out the Tour Dates.
Disclosure: I attended the Press Night. All opinions expressed are 100% my own.
Posted by Christine Taylor at 15:13