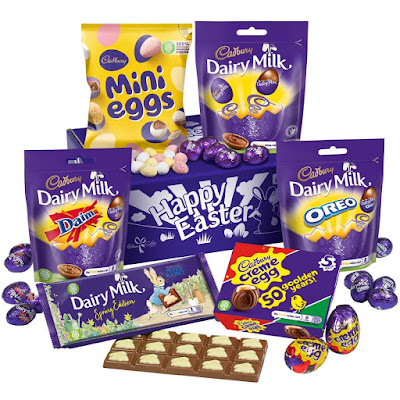 Half Term is just a day away so it's almost time to relax for a while. This week I wanted something to look forward to, so I'm giving away a little Easter gift as Easter will soon be here before we know it. Chocolate always cheers me up so I hope it works for you too.
One winner is going to win this fantastic Cadbury Eggstravaganza Box which contains:
1 x Cadbury Dairy Milk Minis Eggs Bag 77g
1 x Cadbury Dairy Milk Minis Egg Bags with Daim 77g
1 x Cadbury Dairy Milk with Oreo Minis Bag 72g
1 x Cadbury Mini Eggs Bag 80g
1x Cadbury Creme Egg 5 Pack 200g
1 x Cadbury Dairy Milk Spring Edition Bar 100g
To WIN - Simply use the Rafflecopter Form below to complete as many or as few of the entry options as you like. It's completely up to you how many you do but remember, the more entries you do, the more chances you have to win. 1 lucky winner will be chosen at random after it closes on Sunday February 28th  - Open to the UK Only - Good Luck x
a Rafflecopter giveaway
This is not a sponsored Giveaway - The Prize is supplied by myself. Terms and Conditions: One winner will be drawn at random using the Rafflecopter App. This Giveaway is only open to the UK. The giveaways ends on Sunday February 28th.
Posted by Christine Taylor at 14:56 110 comments:

My Hospital Dash and DVT Recovery.

My Hospital Dash and DVT Recovery.

Just a few weeks back I wrote a post about how life in 2021 had to get better surely, but boy was I wrong. Life was pretty normal apart from a pain in my groin which had been on and off for a few days. It was ok when I was sitting down but made standing up quite difficult and the pain was quite sharp until I'd walked it off. Thinking I'd just slept funny or had pulled a muscle or strained something, I just got on with things like normal. That was until Tuesday morning, on the 19th of January, that I woke up to a throbbing pain in my left leg. My leg was swollen quite a lot and had started to turn purple in colour and began to feel very cold. I went online to 111 and filled out the questionnaire, which told me to ring 999 for an ambulance. But me, being me and not wanting to over react, I called my Mum who was so worried that she came straight round. This time I called 111 and spoke to a lady who talked me through the questions again. She told me a Doctor would call me within the next 2 hours but as soon as my Mum arrived, she was like 'No, you need to get help' so my Dad drove me to A&E right away and now looking back. I am so thankful that he did as if we hadn't acted so quickly, my health could have deteriorated very quickly.

As soon as I was checked in and seen in A&E, the Doctors were very concerned and things got a little bit crazy around me. I was hooked up to lots of wires for an ECG and bloods were taken. I remember being given Morphine into my drip as Doctors were rushing around trying to feel for a pulse in my left foot. It took 3 Doctors to find it which was so scary at the time.

The hospital where I was, wasn't doing the X Rays or scans that I needed because of Covid so I was transferred to another hospital about half hour away on the other side of the city. I was put into an Ambulance and raced across town with the blue lights flashing and sirens going. It was all quite a blur by that point. I don't remember much about that hour or so.

The next few hours weren't pleasant. I was seen by several doctors and specialists. Told they thought I had blood clots in my leg and then moved around to several different wards. The hospital was so busy, there were people everywhere. The beds were all full and the waiting room was even fuller. At one point, I was moved from my bed, back to the waiting room in a wheelchair so that someone else could use the bed for assessment. It wasn't a pleasant night for me but I know the staff were all so busy and just trying to do their best to help everyone.

After arriving at the 2nd hospital at around 11am, I finally got taken to a ward to get some sleep in an actual bed at 4am the following morning. I remember waking up thinking I was on a Covid Ward as there was big plastic sheets between us and 2 of the patients in my room were on a breathing apparatus. I was absolutely terrified not knowing what was going on. 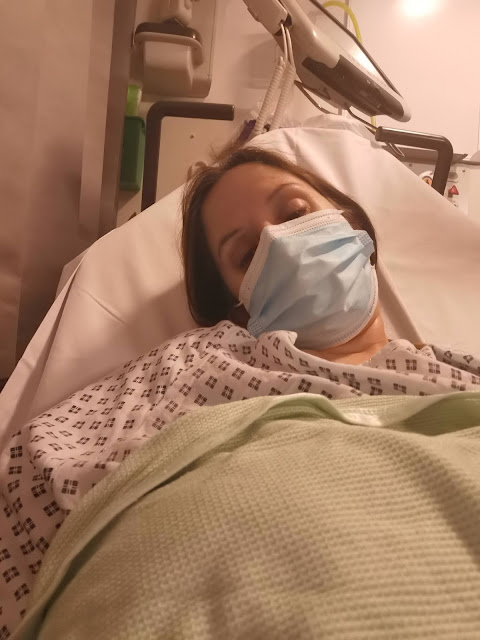 I wasn't on a Covid Ward but we were being separated as we'd been 'Exposed to Covid' somewhere along the way. We were all tested for Covid several times but were Negative luckily. I spent a whole 3 days in the hospital, and had lots of tests. I had an ultrasound one day and a chest x ray the next. I was hooked up to all sorts of drips and given oral Morphine every few hours as the pain was unbearable. I was diagnosed with Multiple DVT's, which were blood clots in my left leg. No one knew how or why I had got them so my medical notes simply said 'Unexplained DVT' which is crazy as for my age and lifestyle, I shouldn't have had them. 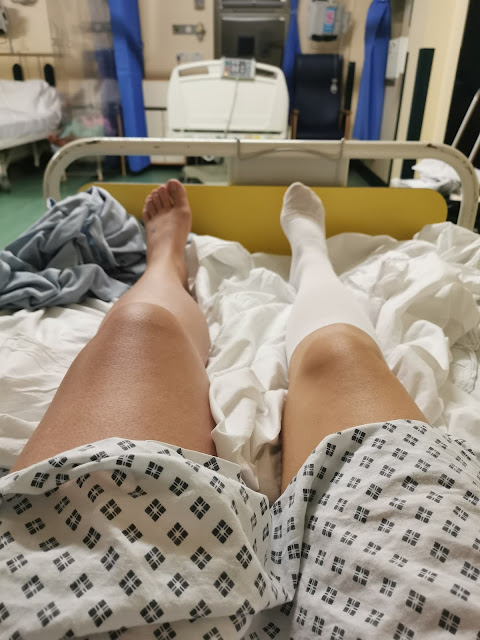 After 3 days I could go home but that was just the start of the real recovery, that's when things got really hard. In hospital I was given Morphine for the pain but then just a few hours later when I was sent home. I was only given Paracetamol, and that was a really tough as the pain was so bad, it kept me awake all night. I was given my medication for the blood clots (blood thinners) and told I'd see someone in about 8 weeks time to see how I was. I couldn't walk, could barely stand, and hardly wanted to move as the pain was so bad. At that point, I just couldn't see how things were going to get any better. It was tough and very emotional.
I was completely reliant on my family for everything. I had to stay in bed, upstairs for the first week as I couldn't walk up and down the stairs and with the toilet being upstairs, it was just easier. My children checked in on me all the time and my boy hardly left my side. He would lie next to me watching his ipad just to keep me company, even when I was sleeping. 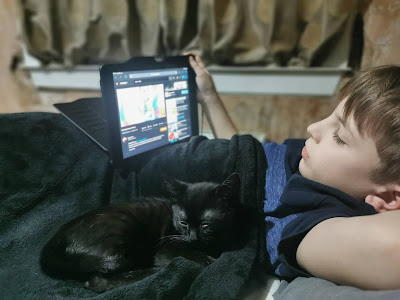 About a week after I'd came home, I was finally able to stand and walk a little using my crutches. I was able to climb the stairs meaning I could return downstairs and join in a little more. I felt so useless though, I'd only been married 4 months, this wasn't what my husband had signed up to. I felt awful for him as he was having to look after me, the children and still go to work. I could see it was hard for everyone around me and it was hard to watch.
Today, I am happy to say that I'm feeling much better. It's been a long 3 weeks so far and I'm not totally back to normal just yet. I can walk around the house unaided but haven't ventured outside just yet so I don't know how far I can actually walk. But I'm getting better.
So when I wrote that post a few weeks back, about life having to get better surely, I was being naive and shouldn't have taken so much of my life for granted. I will never moan about being bored and lying in front of the TV doing nothing again. I will never moan about going on walks, or having to go food shopping, as they're all the things that I miss so much right now.
Life right now is far from normal, but I'm just glad, we're all OK.
Posted by Christine Taylor at 14:44 3 comments: