Goodbye 2019 You've been our Hardest Year yet.

Goodbye 2019 You've been our Hardest Year yet.

2019 has been a year of love yet troubles and a year of fun yet hardship. It's been one of the hardest years of my life so far. So much happened that was out of my control and impossible to fix. We've had unexpected changes in careers which led to a shuffle in finances, teenagers acting up and a huge family fall out that's let us a member short here.

My daughter, now 17, fell in with the 'wrong crowd' which is every mothers nightmare. Times were hard and things got difficult, almost impossible in the end. Choices were made in her best interest and now, my child no longer lives with me which is absolutely heart breaking. She needed a fresh start, a chance, away from here to put herself back together and find her own way. She now lives with her Dad who's taking care of her. I know she is safe and doing well but I miss her so much. Christmas hasn't been the same this year without her but I've tried my best to keep it happy for my younger children, as they're completely unaware of what's been happening around them and I hope to keep it that way for as long as I can.

For now I just have to keep going as best I can. Sadly life goes on and even though only two of my children are here at home with me right now. I am the Mother of 3 beautiful children and I absolutely adore them all. Life changes and they grow up fast, and things happen in life that we may not expect or want to happen. Things that are out of our control and beyond us but life goes on and will continue to do so whether we are ready for it or not. That's life! 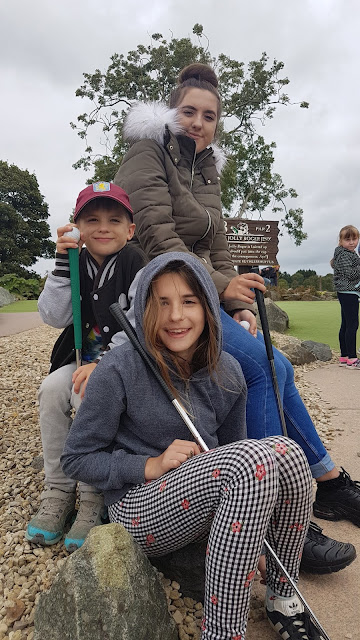 2020 will see my first born turn 18, my 2nd daughter turn 13 into a teenager and my youngest turn 10 into double figures. 2020 will see me turn 38, almost 40 - eek, and will hopefully find me a new career. 2020 will be the year that I marry the love of my life and have the biggest celebration that we can afford to bring a little joy to our families in this time of uncertainty and troubles. I'm hoping that 2020 is a year to look forward too.

I hope you've all had a Merry Christmas and have a Wonderful New Year!

Posted by Christine Taylor at 01:57 2 comments:

We're all huge Marvel fans in this house so last year when we saw they were doing a live show, we were thrilled. It's been a long wait but yesterday, our time finally came and boy were we excited. We've been to watch many shows live but nothing quite like this one. Marvel is known for being action packed, dramatic and full of adventure and battles.

Yesterday we went to see Marvel Live at the Arena Birmingham in town. The Arena was packed out with excited children and grown ups, many of whom were dressed up as their favourite Marvel characters. We saw lots of Iron Man, Captain America, Black Widow and more. Ryan didn't want to rock a full costume so he donned his Iron Man T and hat instead. 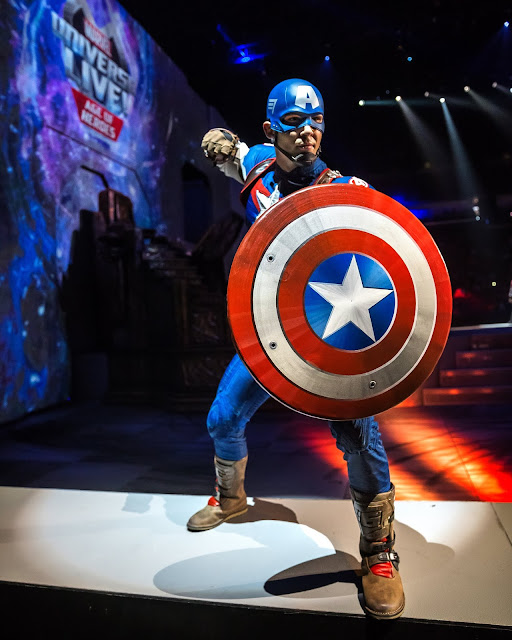 The show was packed full of stunts, special effects and even fire from start to finish.

We saw: Spider Man, Iron Man, Captain America,Thor, Black Panther, Hulk, Black Widow and The Guardians Of The Galaxy ALL Unite in a race against time to defeat Thor's evil brother Loki in an epic quest to defend the universe from evil. The battles were fantastic, so well choreographed. Characters were 'flying' everywhere and spinning, tumbling and falling too. It was so good to watch, you know it's a good show when it ends way too soon.

We could have sat and watched it all night - it's a real treat for Marvel fans. 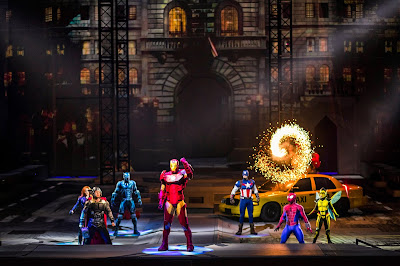 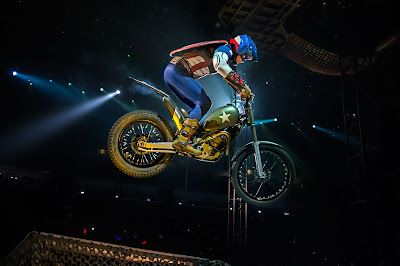 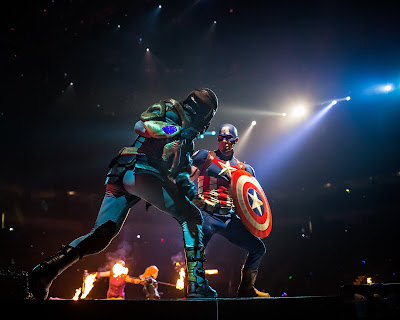 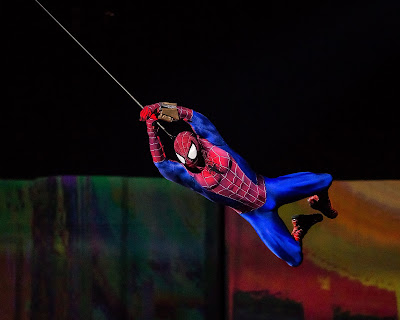 Marvel's mightiest heroes face off against some of the most threatening villains in the Marvel Universe. Loki, Nebula, Yondu, Green Goblin, Electro, Rhino, Black Cat and More. 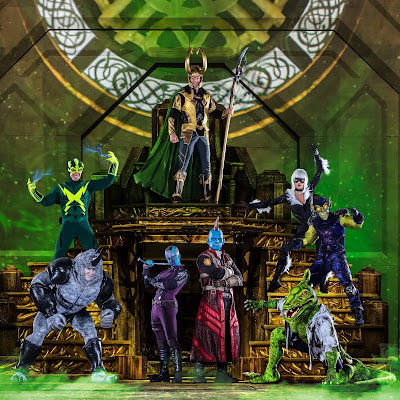 Marvel Universe Live is a fantastic show for the whole family. With it's gripping stories to keep you hooked and amazing stunts to keep you entertained. This has got to be one of the best live shows we've seen this year. We all had an amazing time and loved every minute of the show. We hope they do another one next year as we'd really love to go and see it again.

My boy Ryan and Daddy finally found a show they could enjoy together. They sat chatting about the scenes and shouting along with the characters. There was lots of 'Boos' and 'Cheers' when battles were won or lost throughout. It was really nice to see them joining in. 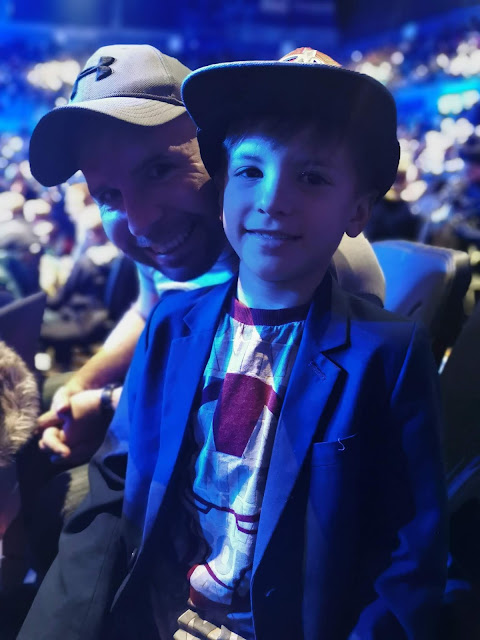 We would definitely recommend going to see Marvel Live if it's coming to you.

The show ran from Wednesday 18 September all the way up until today Sunday 8 December where it's last show will be held here in Birmingham this afternoon. The ticket prices were from £26.00 to £57.75 which was a fantastic price for the show we saw.

If the tour returns next year, which we really hope it does, we can do it all over again.

Disclosure: We were gifted tickets to the show for the purpose of this review.
Posted by Christine Taylor at 01:47 2 comments:

Riding into December on The Polar Express Train Ride #Review

Riding into December on The Polar Express Train Ride 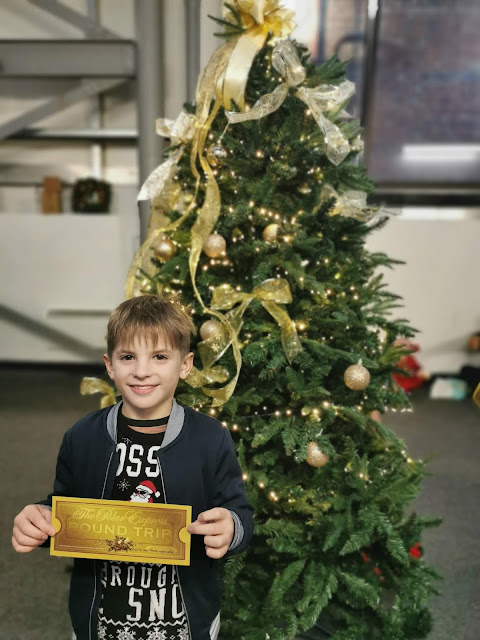 To celebrate 15 years of Polar Express, we were invited by Warner Bros to attend an afternoon on The Polar Express Birmingham steam train! Vintage Trains are proud to be hosting this exciting and captivating experience like no other. The Polar Express Train Ride has returned to central Birmingham this Winter, bringing the magic and charm of the 2004 motion picture, The Polar Express to life. With theatrical characters that entertain you all the way, your family can relax and immerse themselves in the sights, sounds and intrigue of this classic children’s tale. You will be totally engrossed in the story of The Polar Express by Chris Van Allsburg as you enjoy delicious hot chocolate and chocolate chip cookies. The Chefs were so good, they made us laugh out loud on several occasions and showed us pages from the beautifully illustrated book for the carriage to join in and read along too. 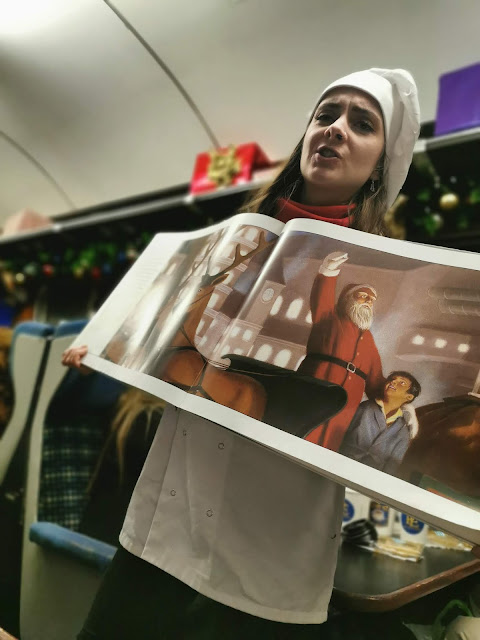 Chef Nutmeg looked after our carriage and did a wonderful job of entertaining us throughout our journey today. She sang and danced with us and put on a real show. We helped her with the '12 days of Polar-mass' and even sang along to some classic Christmas hits too. 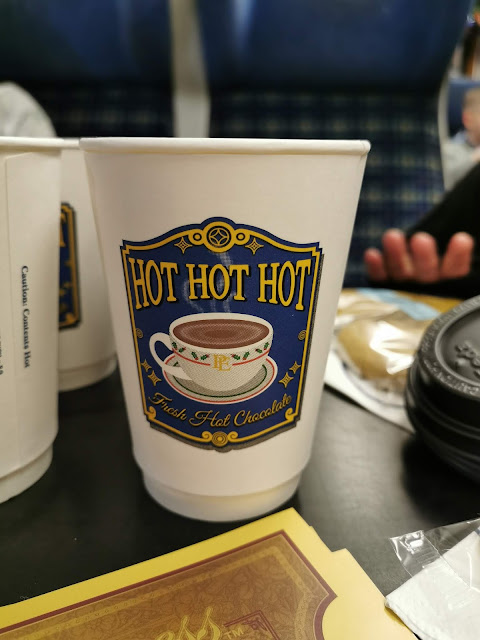 The hot chocolate was yummy and the chocolate chip cookie was a nice treat too. 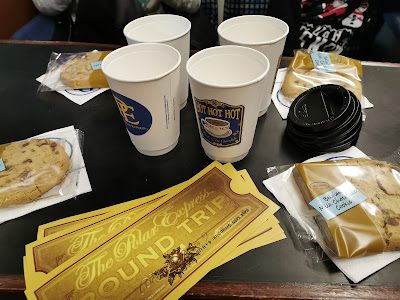 The Polar Express train ride is a magical experience filled with fun and laughter, stories and songs. Both Lily and Ryan had a lovely time. It was so nice to see them enjoying themselves. We've been on many a Santa Visit but none quite like this. Santa was special, he took his time to talk to everyone on the train and really listened to the children. Each person, young and old was given the first gift of Christmas, a beautiful, magical bell. 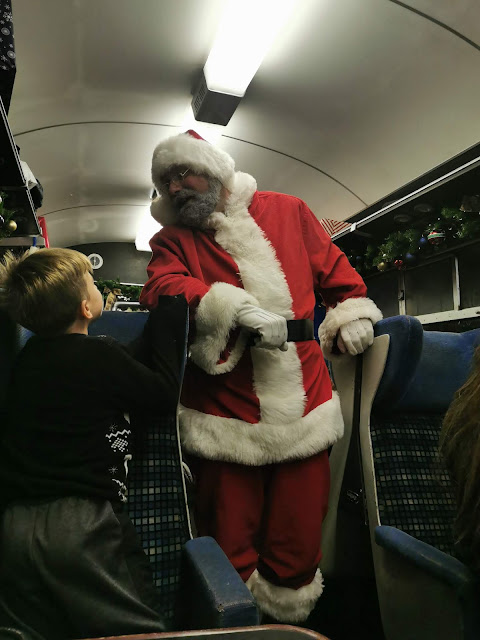 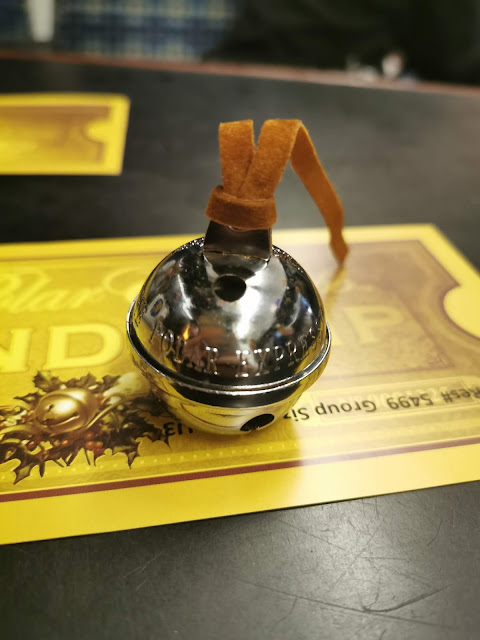 Our journey lasted around an hour in total and costed £49 per seat. It is cheaper to go on a weekday but for what we experienced today, I think it was worth every penny. We all joined in and had a wonderful time visiting the North Pole. Everyone was so nice and friendly and really made you feel welcome. Guests, young and old are encouraged to wear pyjamas just as the children did in the film. The children will love it and maybe you can persuade family and friends to join in too. I wore my Christmas jumper as It was a little too cold for my PJ's but once aboard, the atmosphere on the train comes alive for a truly magical experience! 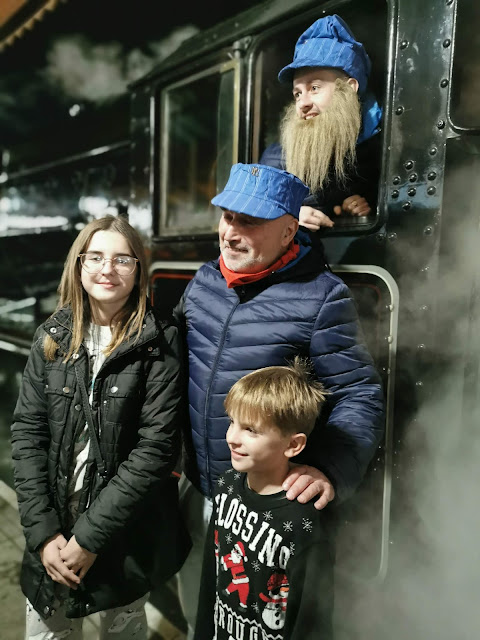 Our trip to the North Pole today was our way of celebrating the 15th Anniversary of The Polar Express Movie with Warner Brothers UK and what a wonderful way to celebrate.

The Polar Express Train ride is going to be one of those family adventures that we talk about for years to come. Our trip to the North Pole and the dancing chefs who made us laugh. I'm so glad that we went along today, I had a blast and would happily do it all over.

Tickets are still available from the Online Booking up until December 22nd.

Grab your Golden Ticket and prepare yourself for a Magical Ride this Christmas. 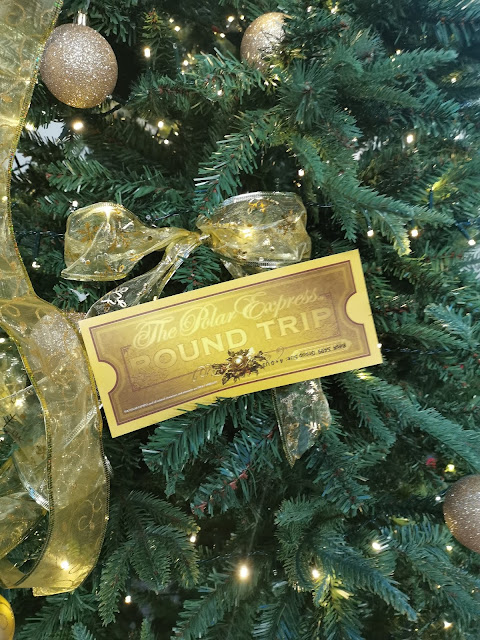 Disclosure: We were gifted our tickets today in order to review our experience but all opinions expressed within this review are 100% honest and entirely our own.
Posted by Christine Taylor at 11:11 No comments: