This Summer we've been taking part in the Rubik’s Summer Scrambles campaign.

Rubik’s has just launched lots of new, exciting products for 2019 and we were lucky enough to join a group of lovely family bloggers to be amongst the first to test out the new products as well as their old favourites as part of a Summer Scrambles campaign with John Adams. 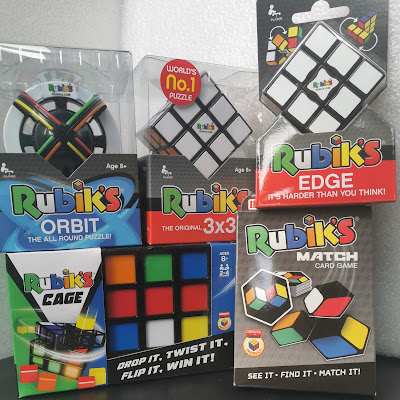 We've been playing with six different Rubik's Cubes over the Summer and can't wait to tell you all about them. My little testers Lily (12) and Ryan (9) have had so much fun.

Did you know there’s 43 quintillion ways to scramble a Rubik’s Cube? Because of this the Rubik’s Cube has become one of the most challenging mind puzzles across the globe.

The Rubik’s Cube is a classic colour-matching puzzle that can be enjoyed anywhere. The original, classic 3×3 Cube is a highly addictive brain teaser that has fascinated fans all around the world for decades. The Rubik’s Cube features six different sides, each made up of nine colourful squares. The aim is to twist and turn the Rubik’s Cube back to its original state, with every side having one solid colour. The new and improved Rubik’s Cube features a mechanism that results in a smoother, faster and more reliable play. The traditional stickers have been replaced with plastic tiles which means no fading, peeling or cheating! 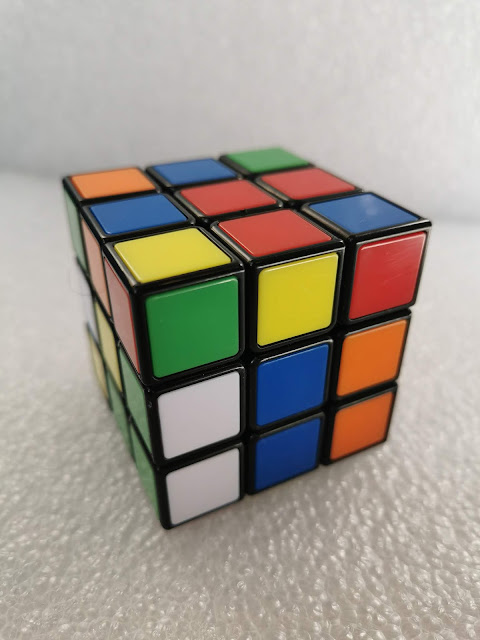 Both Lily and Ryan love the Original 3x3 Rubik's Cube. It's a Classic!

Rubik’s Cage is a brain-bending, mind-twisting strategy game, where the aim is to get 3 cubies in a row to win! It may sound easy to get 3 in a row, but Rubik’s Cage is not as simple as it may seem.You get to take it in turns to place a Cubie into the Cage, or you can twist one of the Cage’s layers to re-shuffle the game instead. You can also turn the game on its head by flipping the whole Cage over to scramble the Cubies and your opponent’s chances! It's a bit like connect 4 but with cubies and you only need to connect 3 in a row. 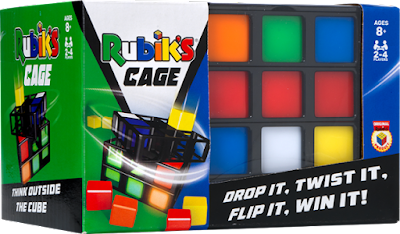 This one's a fun game to play together but not much fun to play alone. It's definitely a game for two which Lily and Ryan had great fun playing together, It's a little tricky but great fun.

Can you take on the challenge of Rubik’s Orbit? Solve all 6 sides of the 3 rotating rings to match the Rubik’s colour all the way round. It may look a bit different to the cube, but the challenge is just as big! Are you up for it? A twist on the 2×2 to keep you puzzled for hours. 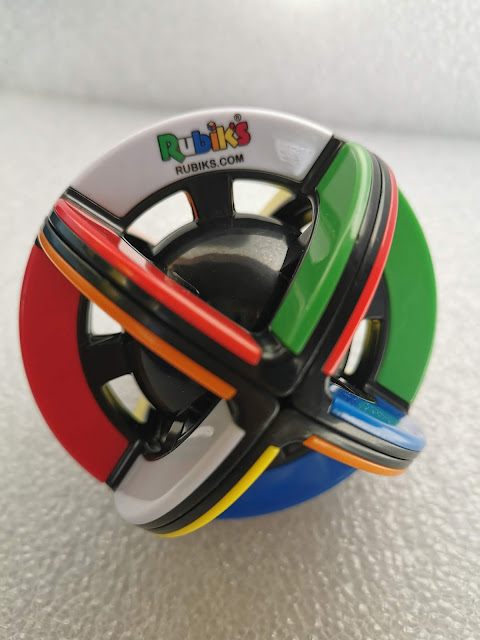 This one's a little different as it's round and not a cube at all but that's what makes it more fun as it's a completely new kind of challenge to complete. Lily really liked this one.

Rubik’s Blocks is like the classic 3×3 Cube you know and love, but with a different twist! You can turn and rotate this crazy cube in the same way as the 3×3 but it also lets you create amazing mind-blowing shapes. It's a quirky one this, but again - it's so much fun to solve. 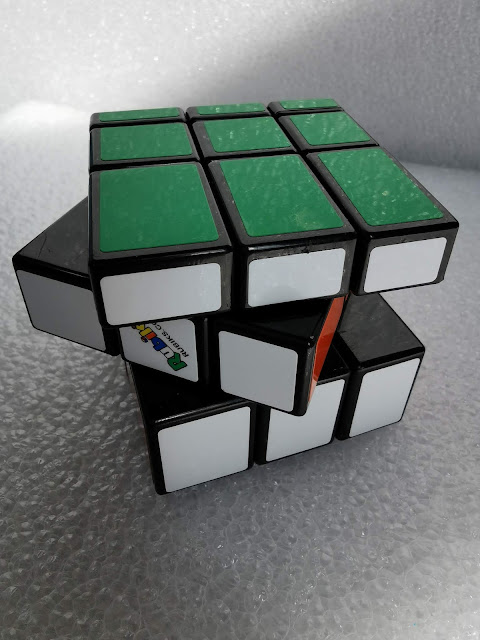 This one was a little harder for Ryan but he still loved playing with it to see what crazy shapes he could make it into. I'm not sure it'll ever go back to its original state though.

Rubik’s Match is the ultimate quick-thinking, fast-action card game for all brain teaser fans. Players race to build the pattern shown on the Challenge cards using their own set of Cubie Card and the first player to complete the pattern wins the round! It's that simple! 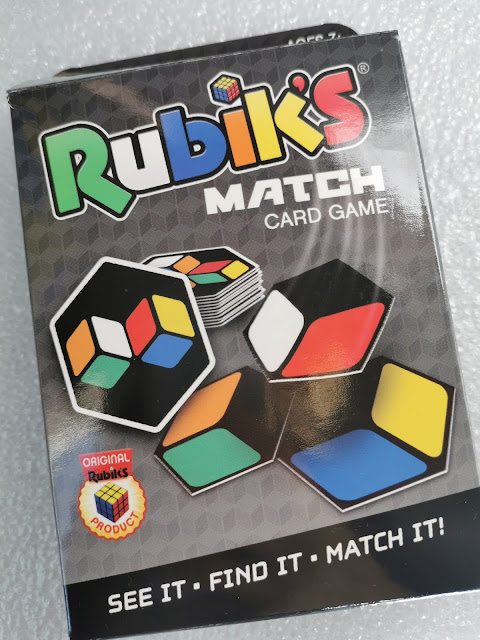 It's a nice little card game for when they fancy something different from the puzzles. Both Lily and Ryan liked the game and found it easy to play. It's a fun one for taking anywhere with you, just like any of the Rubik's Cubes. They're all great for on the go entertainment.

Last but not least is Ryan's favourite of them all. The Rubik’s Edge is like a simpler version of the Original 3x3 Cube.It’s basically, one layer of a standard 3x3x3 Rubik’s Cube but it is trickier than it looks. Mix it up and try to get the colours realigned so that each side has only one colour. The slim profile makes it a great “go anywhere” puzzle. Fiddle with it and try to form cool shapes! Ryan loved this one best of all so he's claimed it all for himself. 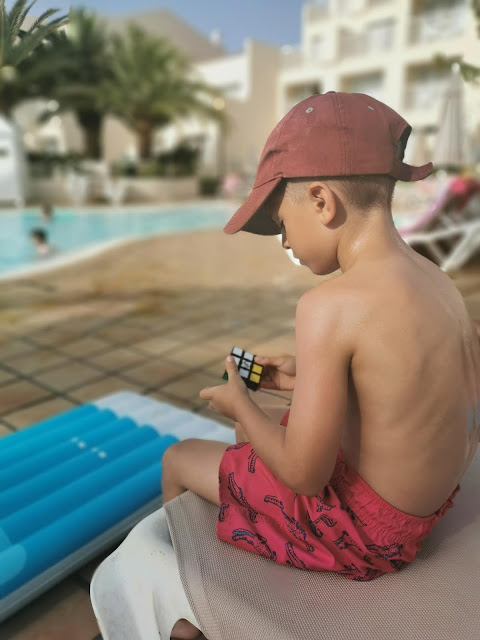 We've been away on our holidays for the past two weeks in sunny Fuerteventura and of course Ryan took his Rubik's Edge with him. He played with it whilst waiting at the Airport, on the plane, on the coach rides and even on his sunbed next to the swimming pool.

All of the new Rubik's challenges are very entertaining and lots of fun.

We've had so much fun taking part in the John Adams Summer Scramble Campaign.

Disclosure: Our Rubik's Cubes were Gifted sow e could take part in the campaign but all the pictures used and opinions expressed are 100% honest and entirely our own.
Posted by Christine Taylor at 06:56