A Roar-Some Time at Monster Jam
The Ricoh Arena - Coventry 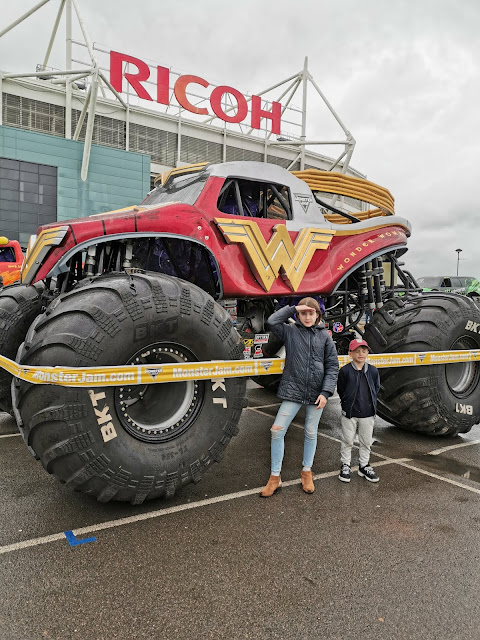 What an awesome weekend, we've just had. On Saturday we headed to Coventry's Ricoh Arena for the Monster Jam event which was a first for us. We'd never been to this kind of event before so we wasn't quite sure what to expect really. We arrived early for the Pit Party where we got to see all the trucks up close and personal to see how huge they really are.

Both Lily, Ryan and Daddy loved having their pictures taken with all the trucks before the show, even if it was raining all morning. Rain wasn't going to stop us from making the most of our family day out. We were there to have a good time, and that's exactly what we did. 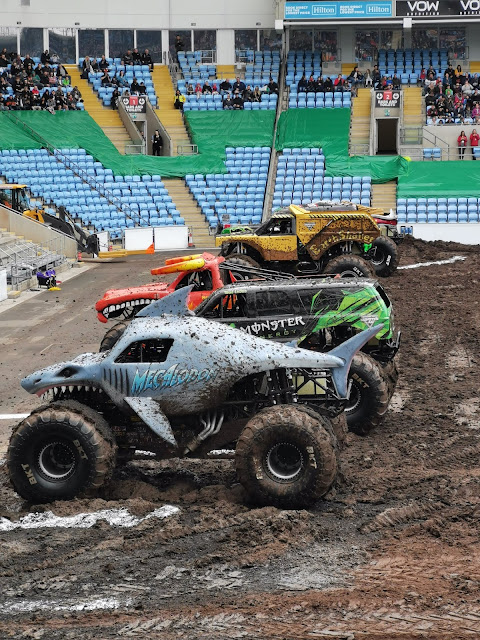 We had amazing seats and absolutely loved the show.  It was very LOUD, much louder than I'd expected but we loved it. The crowds were all cheering and screaming, it was so good.

From the very first moment they entered the arena, we were all hooked.

I managed to capture a short video of their entrance for you.

We watched several rounds of racing, doughnuts and freestyling. All of which were fantastic. Ryan cheered along his favourite 'Grave Digger' whilst Lily screamed at hers 'Megalodon'.

Daddy and I cheered for them all and voted fairly on our phones as a family at the end of each round. It was so much fun, I mean, who knew watching Monster Trucks could be so exciting? The show was so thrilling to watch, the skillful driving, the visual effects and the absolute ROAR of the engines, made it all such a great show. I wanna do it all over again! 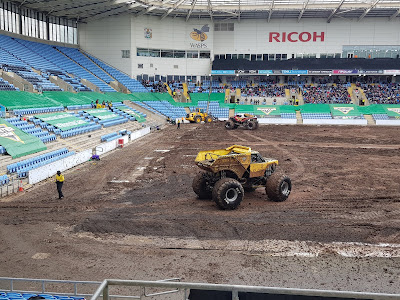 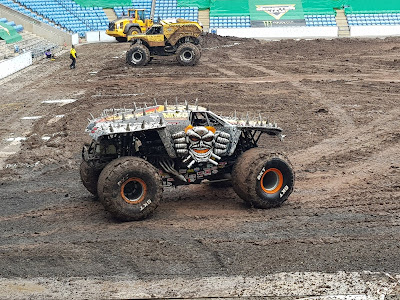 We saw the Trucks spin, jump and even fly at times. The competition was close at times but when Max-D (Neil Elliott) flipped upside completely crushing his car's decorations, we all thought it was over for him but seeing the crowds reaction as he walked away from his car, was amazing. His car was taken away for a while and I have to admit, not knowing if he'd be able to compete in the final event to protect his lead was quite exciting. The crowd went wild when he did come back, even if his car was literally just a shell left after all the damage. He managed an amazing final freestyling run and went on to be crowned the overall winner! 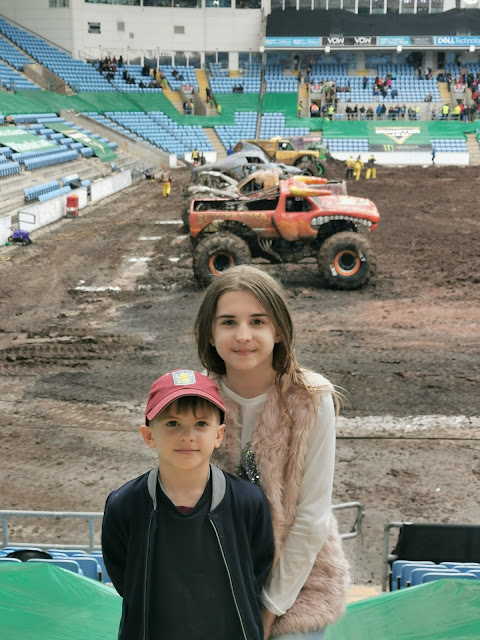 If you ever get the chance to go see a Monster Jam event, I would go. It's awesome!

The show has now left the UK and moved on to Sweden but if it ever comes back, I'm there.

Monster Jam is not our usual kind of show that we'd choose to attend but after the fantastic time we all had this weekend, we're now all happily covered fans of Monster Trucks. Yes!

If you're looking for a thrilling, high adrenaline, noisy day out - this one's for you.

Disclosure: We were gifted out tickets in return for a honest review.
Posted by Christine Taylor at 02:39