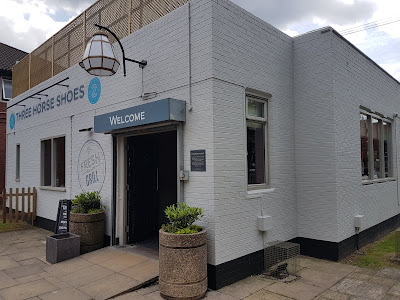 The Three Horseshoes, Sheldon has recently re-opened following a big refurbishment, with a whole new look and updated menu. They're local to Yardley and Marston Green and offer a friendly service. We popped in for our first visit today to check out it's new look and upon first glance, the place seemed clean, tidy and welcoming. There's a few nice booth areas for dining customers and then lots of smaller tables set out throughout the place for drinking customers. We spent around two hours in total in the pub and noticed that most of the tables were occupied by elderly males, drinking beer. It seems like a very traditional pub who's locals enjoy meeting there with friends. We didn't see anyone else eating or any other young children other than two teenagers sat with parents. Don't get me wrong, everyone was friendly enough, it's just a little odd eating your meals when surrounded by drinking folk.

I was thinking maybe the areas needed to be divided a little better giving dinners a little more space to eat. Maybe then, the place would feel a whole lot more family friendly. 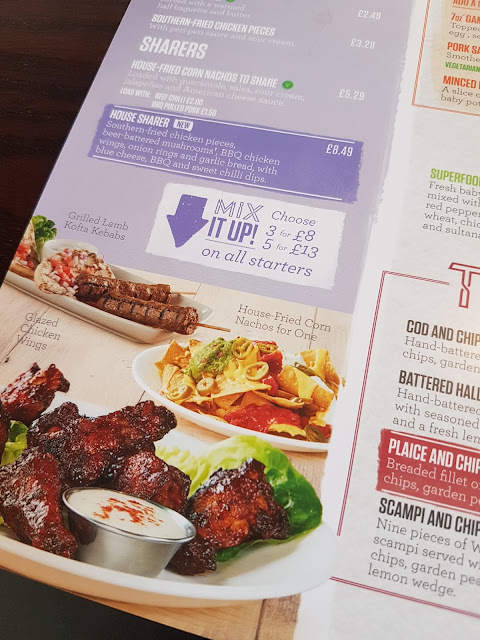 After checking out the Menu which had plenty of choices, we finally decided on what we'd like to eat. Being a Sizzler's Pub, everything comes served on piping hot skillets but you can request for your food to be served on a plate instead if you wish, that's not a problem. 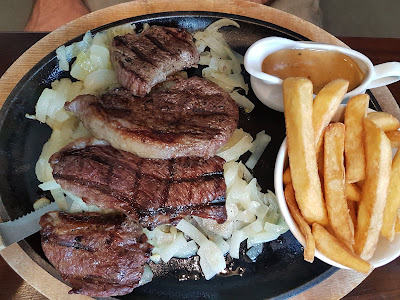 When you order steaks you can add a sauce so he also added the Creamy Diane. The meal was well presented although the onions under the steak were a little raw and the skillet was not sizzling like it should have been, Daddy did comment that his skillet wasn't very warm to touch. The chips and the sauce were both very nice and the steak was OK, Daddy is a little fussy when it comes to his steak as he likes the best steak on the menu, he said it was good but just a little fatty and it was a bit odd that the steaks came cut up into smaller pieces.

I went for the Chicken Katsu which was a nice sized piece of chicken served on peppers accompanied with a pot of sauce, a bowl of rice and a rather large prawn cracker too. 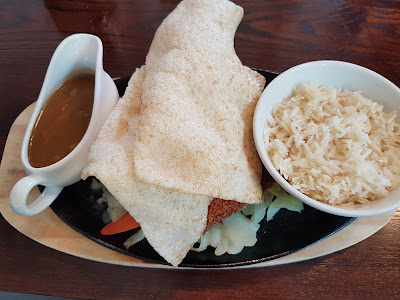 My meal was lovely, I enjoyed it all and would happily order it again sometime.

Lily also went for a steak off the adults menu, this time a 5oz steak though. 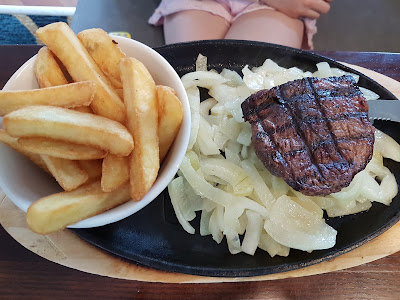 Again the onions it was served on were very raw but the skillet was very hot this time we did have her meal transferred onto a plate minus the onions which she didn't want. Lily's steak was a much better piece and was free of fat and cooked nicely. She enjoyed every bit and managed to finish her whole meal without anything being left over and eat by someone else. 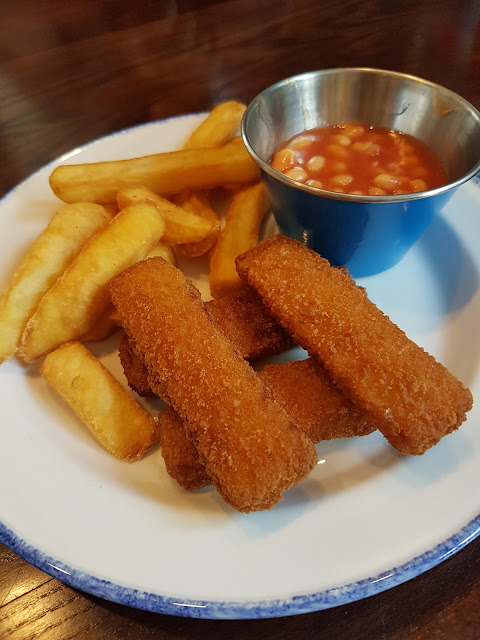 Ryan's meal was very well presented and came out on a small plate. It doesn't look very big but it was just enough for him to eat and there was no complaints from him at all.

We ordered two sides to share between us all too as no meal is complete without onion rings and a side of chips loaded with bacon and melted cheddar cheese. They were yummy. 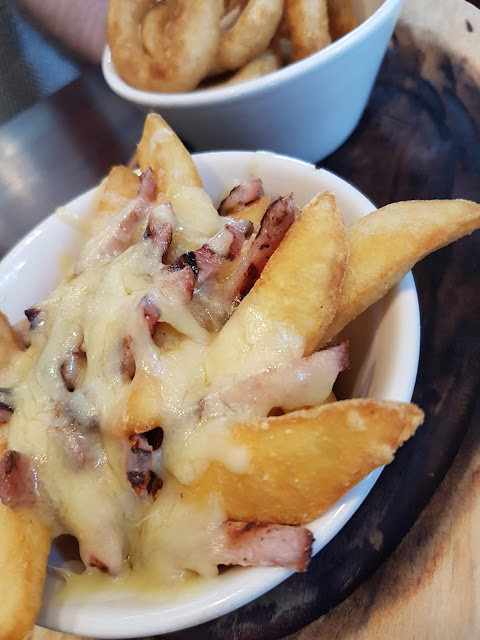 For pudding I went for my favourite, Treacle Sponge. I had it minus the custard as that's how I like mine and have to say it was sweet and sticky and good. Just like it should be. 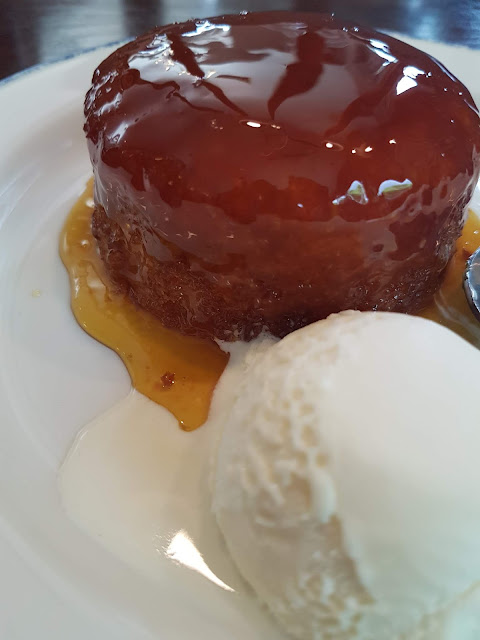 Lily went for a Mint Aero Sundae from the adults menu and I think it's safe to say she was happy with it. Just look at her face, they do say a picture says a thousand words. 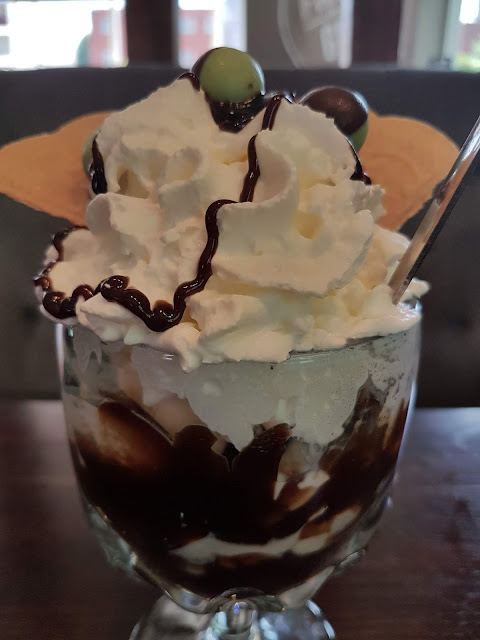 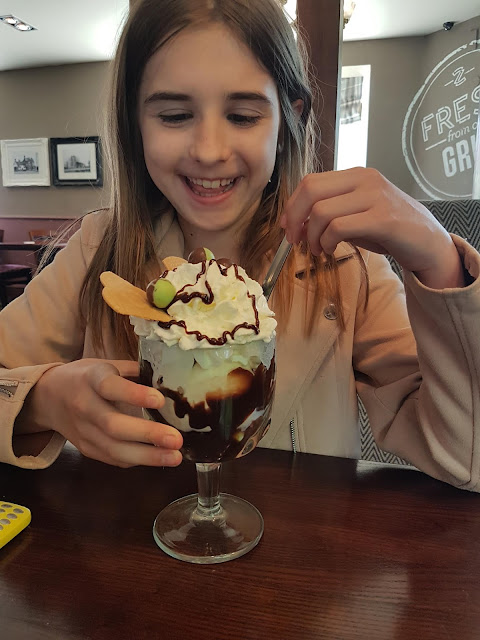 Daddy didn't want a pudding as they didn't have any of the Cheesecake he'd wanted but Ryan had a simple chocolate chip cookie from the children's menu that he was happy with. 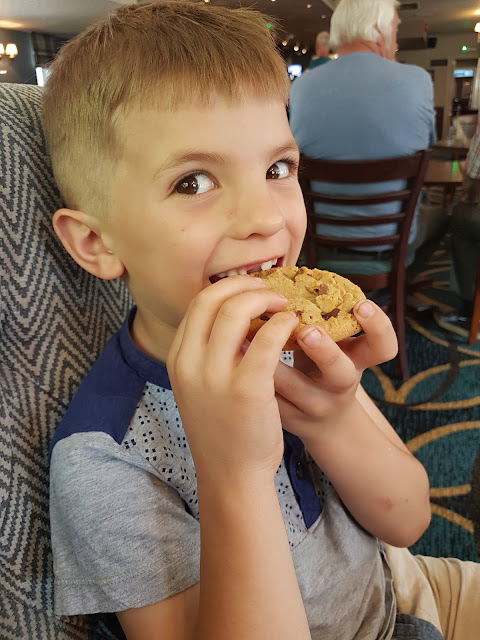 Overall, we all had a nice meal and were well looked after by the friendly staff there. The children enjoyed playing in the children's corner which had a teddy bear claw machine and another similar style game for kids to play on. I could see that the pub have tried heir best to try and make children feel welcome but the whole place did have a much older feel to it.

This was our first visit to the The Three Horseshoes, Sheldon. Most of our visit went really well and the kids seemed to enjoy their meals but I do think we'd have to go back some day and see if it still felt the same as it might have just been a one off on the day we visited.

Have you been to the The Three Horseshoes, Sheldon before?

Disclosure: We were invited to try their new menu and given a discount on our visit.
All the opinions expressed within this review are 100% honest and entirely my own.
Posted by Christine Taylor at 07:33