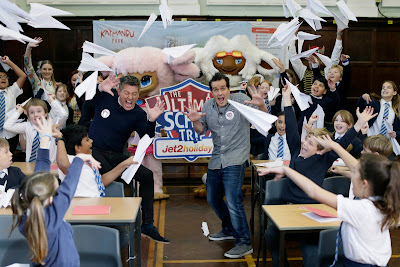 Jet2holidays have launched a nationwide competition where schools can win places on the Ultimate School Trip and there's some good news for you, it launches today! The inspiration behind it comes from research which showed schoolchildren wanted 10 holidays a year and all of their school friends to go with them. They wanted it, so Jet2holidays have granted it!

From today, schools across the UK are in with the chance of winning a place for an entire class of 9-13 year olds on the Ultimate School Trip with Jet2holidays. In total a whopping 9 classes and their teachers will spend a long weekend on Friday April 20th - Sunday April 22nd 2017 at the Sol Katmandu Park & Resort with celebrity hosts, Dick and Dom.

The trip will include a VIP send off at the airport, a welcome dinner with celebrity guests and the ultimate school disco and show. It's an amazing prize!

Dick and Dom will be on the road with Jet2holidays helping to promote the competition over the next fortnight as they travel across the UK on their UK roadshow. There will be 9 stops:

More details can be found at www.ultimateschooltrip.jet2holidays.com. 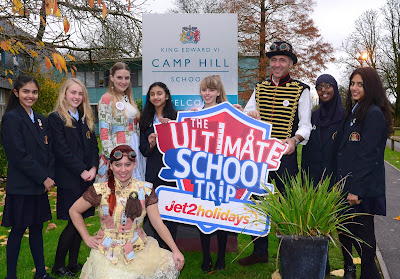 To enter, pupils are challenged to use their imaginations to produce their own promotional piece for the Sol Katamandu Park & Resort. It can be anything from a poster, a poem, a video or a song. What they come up with, is entirely up to them. It's a nice chance to have some fun with their friends and maybe even win the trip of a lifetime. It's very exciting.

The judges, who include Dick and Dom, will shortlist five schools in each of Jet2holidays’ nine airport regions which will then go to a public vote. The final nine class winners will then be announced on Tuesday 13th March but all of the 45 shortlisted schools will receive £1,000 worth of school equipment vouchers which is an amazing runners up prize.

My 10 year old daughter is very excited to get involved with her class. Will your child be entering? It's a lovely chance for your children to win the Ultimate School Trip.
Posted by Christine Taylor at 05:10