We're Having a Party and You're All Invited! #PJMasksToys

We're Having a Party and You're All Invited! #PJMasksToys 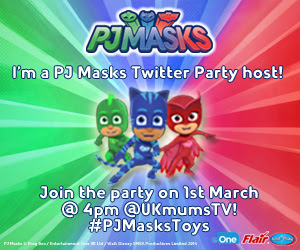 I'm very excited to tell you that we've been chosen to be PJ Masks Twitter Party Hosts.

The Party will take place on Twitter on Wednesday March 1st at 4pm.

We've been playing with some brand new PJ Masks Toys this week and are so excited to show them all too you. Since the toys arrived, Lily and Ryan have really taken to the show and now watch it every day. I think it's a new firm favourite with the two of them - result. 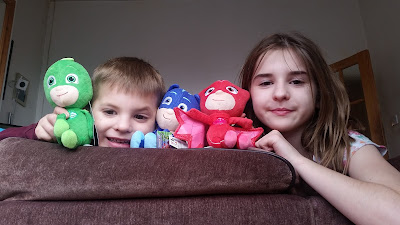 The PJ Masks Beanie Plushes include, Catboy, Owlette and Gekko. Each one costs £8.99 and are so cute, soft and cuddly too. Lily loves Owlette and Ryan loves Gekko and Catboy as you can see. They're nice sized toys that are perfect for free play and playing on the go. Ryan has taken his two new friends to bed every day with him since they arrived. He's so happy with them. The two of them are often running around the living room with them whilst they're flying or climbing walls on a rescue mission. I think it's safe to say, they're a hit! 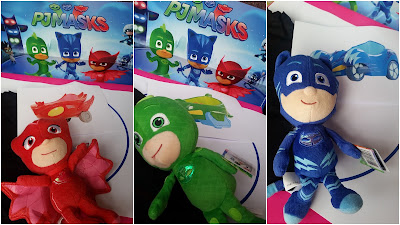 The PJ Masks Dress Up Set - Gekko costs around £24.99 and comes in one size to fit ages 4 to 6 years. Ryan is 6 and fits him nicely but he is a little on the small size. The set contains the costume and the mask which are great fun for playing with at dress up time. Ryan has been trying it out for me and I have to say, he looks so adorable in it, doesn't he? 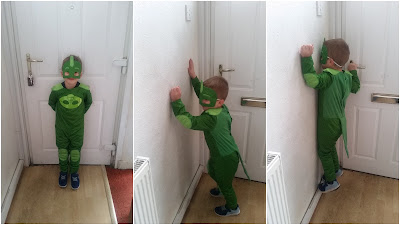 Next up we have the character and vehicle sets. Each character has their very own vehicle but they all have more than one seat so that the other two characters can ride along too.

Cat Boy come with his Cat Car Vehicle, Owlette has a Owl Glider Vehicle and Gekko comes in his Gekko Mobile Vehicle. Each one costs £13.99 and is lots of fun to play with. 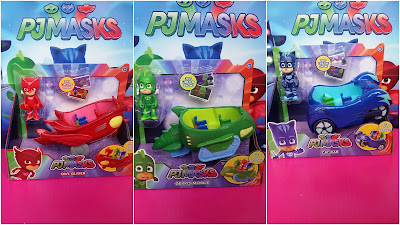 Last but not least we have the PJ Masks Figure Blind Bags. Each Bling Bag costs £2.49 and contains a secret figure from the show. There's 12 to collect and even rare Connor too. We got lots of different ones in our bags but the kids now want more to complete their collection. 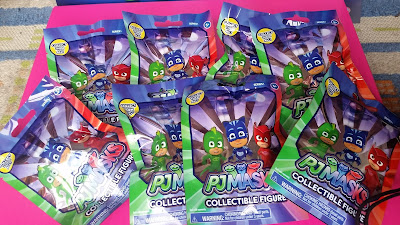 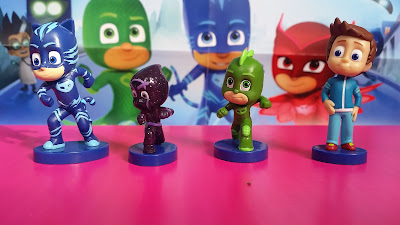 All of the PJ Masks toys from Flair were launched in the shops at the start of February and there's an extra exclusive Deluxe Vehicle Set available in Argos. More toys will be added later in the year so do watch out for what's coming next, I know we're excited.

The PJ Masks Toys are great fun to play with and all really look like their on screen characters, the likeness is fantastic. They're great quality and made to last. Both Ryan and Lily love their new toys but if I had to make them choose just one of them, they would both choose the soft toys as they're just so cute and are great for playing or hugging.

Be sure to join us on party day and who knows, you might win some of these toys!

Posted by Christine Taylor at 03:50