This week we've been playing with Dinotrux Toys .. #Review

This week we've been playing with Dinotrux Toys.

Ty, Revvit, and the rest of your kids' favorite Dinotrux team return to solve tough new challenges in an all-new epic super-sized season of Dreamworks Dintotrux!

Faced with even bigger threats, they'll need to recruit Drillasaurs, Cementaurs, and even Hydrodons to help defeat D-structs and his minions. Let your little reptools experience the power of teamwork and friendship with Dinotrux, now streaming on Netflix! How Exciting! 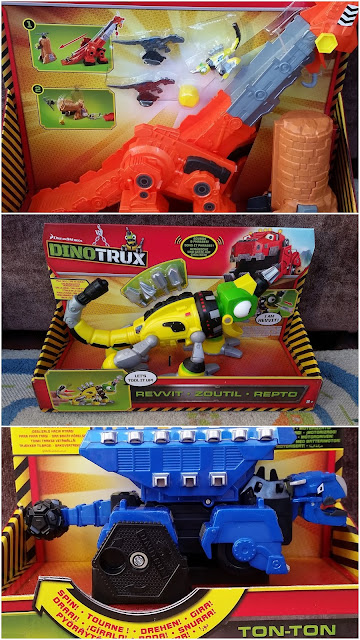 This week we've been playing with three new Dinotrux toys. Ryan has been my chief toy tester on this occasion as these toys were just perfect for him as he loves dinosaurs.

The  Dinotrux Skya's Tall Tail Slide Playset features a large-scale Skya from the Mechazoic Era. The kind-hearted half-dinosaur, half-construction vehicle is made for large-scale fun. Six different points on the playset set feature kid-powered mechanisms to activate vehicle motion on the track, send Reptools to different levels or aim for Scraptor targets. A die-cast Revvit Reptool figure is included for fun right out of the box. Lift Skya's tail to move the body and send Revvit rolling onto the path of your choice. You can switch it up again by manually setting a platform to different levels. The aim of the game is to place the Scraptor figures onto the track and aim to knock them down. It's a simple game but lots of fun. 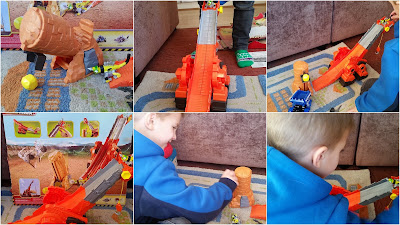 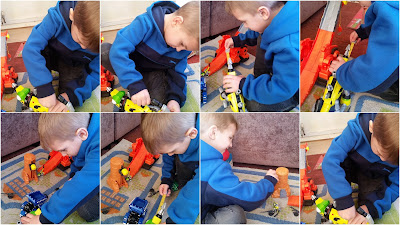 The first good point about this toy is that everything is ready to play with straight out of the box. You don't need to put anything together or make anything up, it's all ready built and set up. You can move the pieces around as you play to create different scenes and scenarios. Ryan loves sending the Revvit Reptool figure zooming down the track. He sets it up so that the tower is at the bottom in the perfect position so that it hits the button and releases the yellow boulder which then falls down into his other toy. He loves the fact that he can mover everything around and swap and change what he's aiming for. It's lots of fun and great to watch. He's been playing with it quite happily for hours, making dinosaur roars as he plays.

The Dinotrux Reptool Character toy is Reptool Revvit from the Mechazoic Era. He comes ready to roll into fun on his wheels that mimic his movement on the animated show. He says several unique Reptool sounds and phrases and even features a tail-activated spinning drill head with interchangeable bits that can be stored on his back when they're not in use. Reptool also has a secret real measuring tape as a tongue which is hidden inside his mouth. 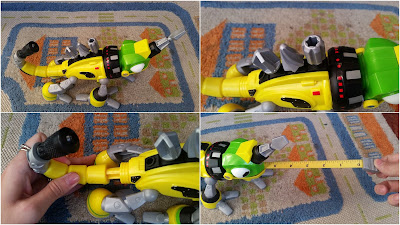 Ryan loves the noises he makes when he pulls his tail but loves the hidden tape measure the most. He's often found measuring his other toys with it which is really cute to watch too. He loves changing the drill bits over as and when he chooses and I really love the fact that the pieced you're not suing can be stored on his back making them look like he's spiky. It's a cute toy that any fan of Dinotrux would love but saying that we've not yet seen the show and Ryan still loves him and all of his new Dinotrux toys as they all fit perfectly to play with together. Ryan uses his Reptool to fix his Skya's Tall Tail Slide Playset when it needs fixing.

The Dinotrux Ton-Ton Die-Cast Character is one of the smaller toys in the collection but it comes in just as handy and adds to the fun when played with, with the playsets. Ryan uses it to catch the falling yellow boulder mostly which gives him a very important job in his games. All together, Ryan has loved playing with his new Dinotrux friends and toys. 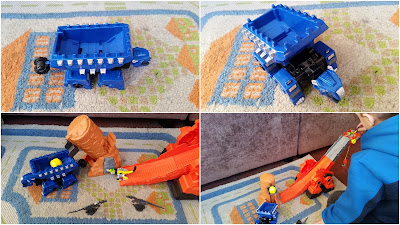 The thrill-seeking Ton-Ton is featured in mid-sized scale with movements and abilities that are unique to his on-screen personality, like a mighty truck bed. With a body built like a dump truck, Ton-Ton is no stranger to hauling big loads or little loads like falling boulders. He has rolling wheels which make it easy to push him around. The Mechazoic Era characters are very collectable and help to build your own perfect out this world empire of Dinotrux!

There are lots of different toys available in the Dinotrux range. You can buy them now in all good toy stores like Argos, Toys R Us and Smyths (just to mention a few) We've had lots of fun with them here and would happily recommend them to any Dinitrux or dinosaur fans

Disclosure: We received our toys for free in return for an honest, unbiased review.
Posted by Christine Taylor at 06:48