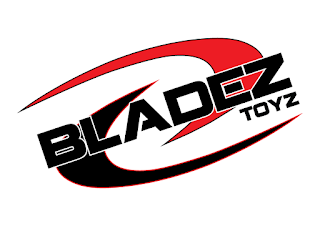 This week we've been playing with some new RC (Radio Control) Inflatables from Bladez Toyz. There's lots of well know Characters to choose from but we've been having great fun with Darth Vader from Star Wars, Baymax from Big Hero 6 and Olaf from Frozen. 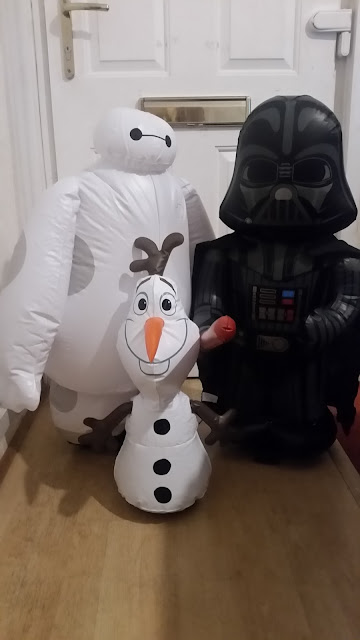 Each inflatable comes with an easy to use handset and great movie phrases. They're all really life like to their on screen characters and are pretty big, although some are much bigger than others as you can see from the picture. Darth Vader and Baymax are Super Jumbo Size whereas Olaf is Jumbo size and much smaller than the other two. 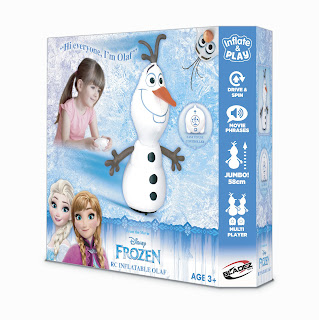 Olaf measures 58cm tall and has a 2.4GHz Radio Control. He only has two buttons on his control: Forwards and Spin. It's great for younger children as it's simple to use. There's no confusion with the buttons, just one to go forward and another to turn. It's child's play.

The drive range on him is 30 metres which gives you lots of space for play. He can be used indoors or outdoors but does require 6 x AA batteries which are not included in the box. 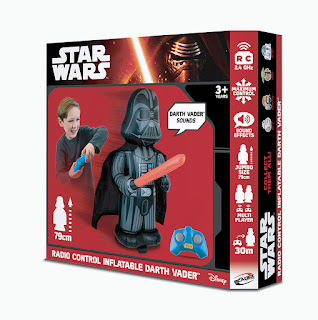 Darth Vader measures 79cm high and also has a 2.4GHz Radio Control but he has 4 buttons on his control:  Drive Forwards, Backwards,  Turn Left & Right / Spin. Having four buttons gives you a little more control of where he can go making him perfect for the older children or even big kids (adults) in your life. He has a large red light sabre too which is cool.

The drive range on it is 30 metres and he can also be used indoors or outdoors but does require 4 x AA and 1 x 9V batteries which are not included in the box. The box contains: 1 x Inflatable Body, 1 x Handset, 1 x Drive Unit, 2 x Stabilisers and 1 x Instruction Manual.

Everything is really easy to put together and it doesn't take that long to blow up as the body is divided into smaller sections making inflating much easier and quicker to do. 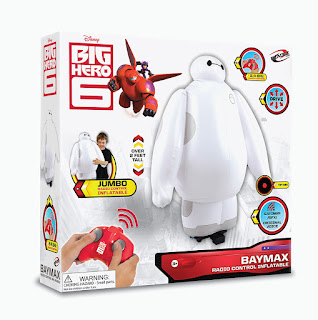 Baymax measures 81cm high and also has a 2.4GHz Radio Control just like the Darth Vader one. Again this one has a four button radio control to: Drive Forwards, Backwards,  Turn Left & Right / Spin. The drive range is still 30 meters and requires 4 x AA and 1 x 9V which are not included in the box. Inside the box, there is: 1 x Inflatable Body, 1 x Handset,  1 x Drive Unit, 2 x Stabilisers and 1 x Instruction Manual which is easy to follow.

All three of the inflatables do come with several warnings on the box:
All three of my children have been having great fun playing with these over this past week or so. It doesn't matter how old you are, radio control inflatables are always fun to play with.

Ryan (6), Lily (9) and Chloe (13) have all loved having a go racing them around the living room. They've had races, played 'play fighting' and acted out their own dramas with them.

You can play with each one separate or all of them together like we have been but I do warn you, that can get pretty noisy. One on it's own isn't too bad noise wise but when you have all three of them going at the same time in one room, they do sound a little loud. There's an easy solution to that though, just send them all outside or make them play just one at a time. 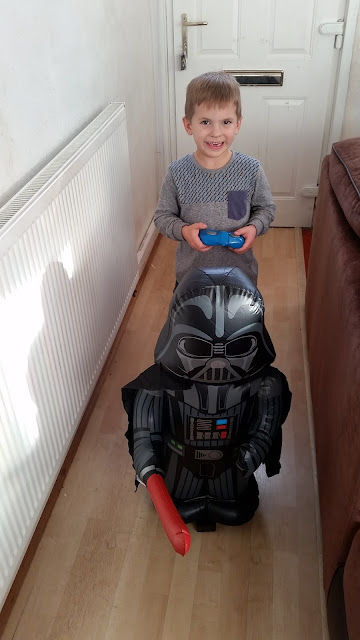 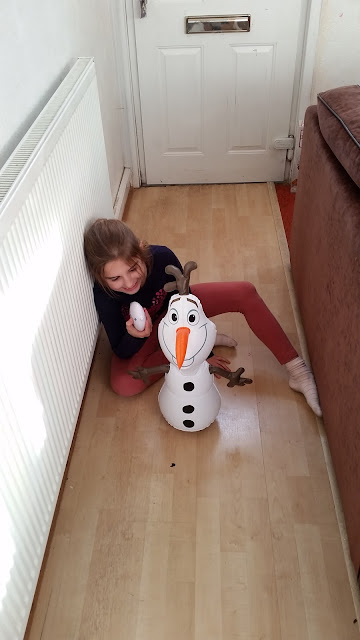 The RC Inflatables from Bladez come in all shaped and sizes and really are lots of fun. I've even had a go myself to back that up. There's lots of characters to choose from and something for everyone of all ages. We've had a great time with them and have enjoyed them very much. I'm sure they're going to be on lots of children's Christmas lists this year.

Disclosure: We received our RC Inflatables for free for the purpose of this review but that does not in anyway effect our opinions or thoughts as they are always 100% our own.
Posted by Christine Taylor at 10:43