Drayton's Magical Christmas opened it's doors to the public this weekend and we we were lucky enough to be there on the opening day. The sun may have been shining a little but Drayton Manor was very much a Christmas wonderland as we were surrounded by beautiful snow covered decorations and Thomas Land characters throughout the park.

We were invited to make Christmas food parcels for some of the Zoo animals which I have to say was very enjoyable. Lily made an edible wreath for the Lima's and Ryan made a Sweet Potato Bauble for the Tamarin. Some children also made Maggot filled presents for the Meerkats. Once we'd made our gifts we got to then visit the animals to watch them open them. My 3 loved this activity and practically followed the Staff member until it was all over. 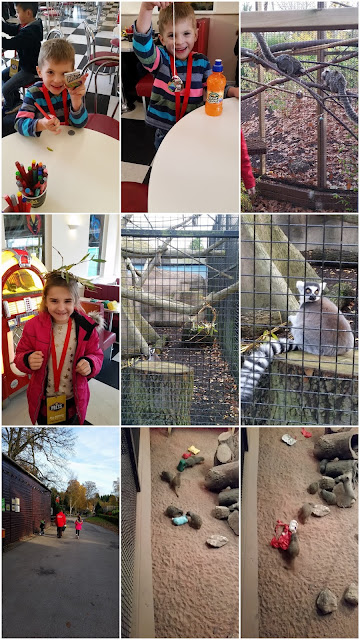 After visiting the our Zoo friends we stopped by to say hello to the Reindeer who were happily resting before their big day with Santa. The best thing about being in Drayton Manor Park in the winter is that the queues are very small or non existent even as we got to ride the Ben 10 Roller coaster 7 times in less than half an hour which was awesome fun. All my three love the Ben 10 ride but have only been on it once before as it always has a huge queue in the summer months as it's a very popular children's ride. I know, we all love it!

All of the Thomas Land rides were open and covered in a pretty dusting of snow as Thomas Land had several snow fall showers throughout the day. Thomas himself was all dressed up and looking great. There were Bell Ringing shows and lots of musical things going on around us too. Thomas Land was in full swing and looking very magical filled with smiling faces every where. It's not only pretty in the daylight though as it's even prettier by night. 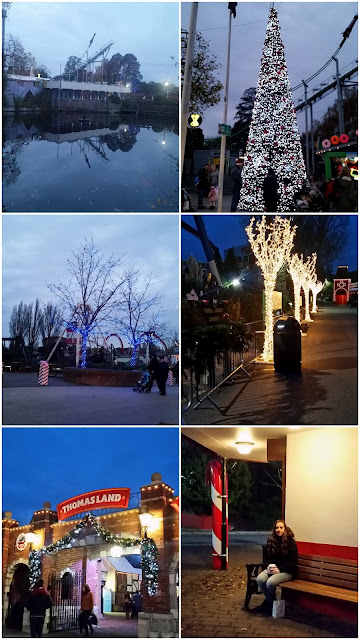 After all the excitement of the rides we got to take some time out and sit down for 15 minutes to enjoy the 4D Cinema Experience which was The Polar Express. I'm a huge fan of the 4D cinema so this was a must see for me and I'm so glad we made time to fit it in. The show was magical, there was snow flutters, moving seats and even water splashing. The shows run every half hour or so throughout the day so do stop by and watch it.

After such a fun few hours, we headed off to see Santa as we'd saved the best until last. Santa's Elfs are very friendly and talk to the children whilst you're waiting to see the big man himself. Santa was fantastic, he looked amazing and was so good with the kids. He talked to them for a good 10 minutes and made them feel really welcome. I've never seen a Santa say 'Respect' with a Fist Bump before but my kids thought it was amazing. We had our photograph taken but you don't have to purchase that and they do let you take your own which I though was really nice of them. After a good old chat and a promise to tidy their room being made they were each given a Christmas goody bag gift. I have to say that I was really impressed with the contents this year as each child got a huge chocolate coin, an Elf on the Shelf plush bear and a Golden Ticket to return to Drayton Manor next Summer. 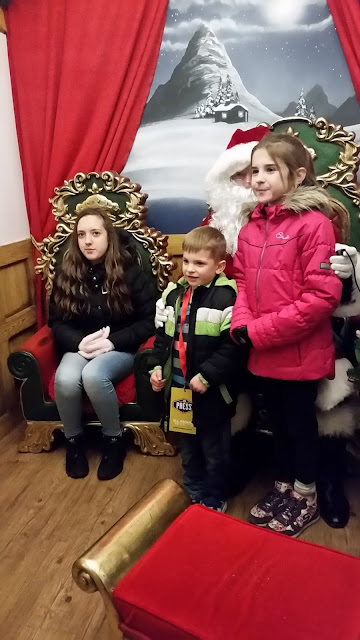 We had a wonderful time at Drayton's Magical Christmas and really enjoyed ourselves.

Drayton's Magical Christmas experience is open from Saturday 19th November for selected dates until Saturday 31st December with selected rides open throughout. Opening times are  9.30am and Ride Opening times are 10.30am. Closing times do change depending on when you visit so please do see the website to find these. Prices are also on the website but if you're planning on going this year, booking in advance will save you quite a lot of money.