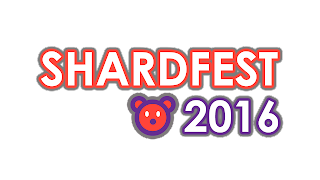 I shared a post a few weeks back about how much we were looking forward to our yearly local family festival, Shardfest. Well this weekend we spent our Saturday enjoying the delights and entertainment that Shardfest had to offer. Tickets were priced at £50 a family but lucky locals like us received a whopping £50% off that price costing us just £25.

There were lots of lovely little stalls from businesses local and otherwise. Three stages of music and a fabulous fun fair for the kids and bigger kids alike. There was a whole host of food stalls ranging from Chinese food to Caribbean food to Traditional Pies and Chips. We were spoilt for choice when it came to food available which was great for us as we spent our whole day there. Ice creams were available and Slush machines were dotted around everywhere which was perfect as the weather was very warm as the sun shone down on us. 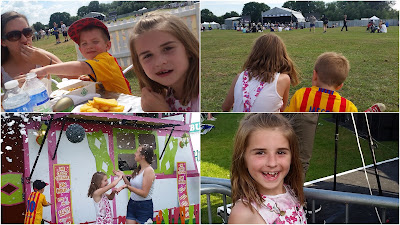 Our day was filled with good old family fun. We did spend quite a bit of money but I didn't mind as we were all having such a good time. We played lots of fun games like Hook a Duck and Darts to win prizes and took turns on the many tombolas that were on offer, all for good causes of course. Ryan won himself a giant ball on the Hook a Duck which he was delighted with. There were lots of games where the prizes were footballs which turned out great as there were happy little boys everywhere playing football in the vast open spaces. I'm sure someone had thought of that, some very clever person of course.

Later in the day after enjoying some of the fun fair rides we sat down on the grass in front of the main stage to relax and listen to some of the musical talents that were on show. 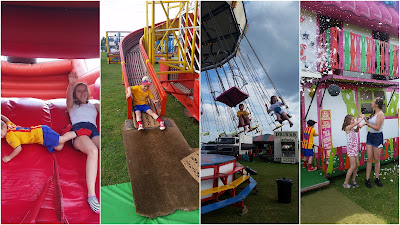 Nothing beats the feeling of live music being played out in the open and being surrounded by people all enjoying themselves. The kids made friends with other local children and played happily for hours. There were adults and children all playing together, you could see and feel the community spirit throughout the festival which was just what we needed.

There were some slight difficulties happening around the stage areas but we wasn't really affected that much. Yes there were gaps between the acts but there was music still being played. Our day was so nice and chilled out, that we stayed much longer than we'd originally planned to. We'd arrived around 1pm and didn't leave until gone 8.30pm. 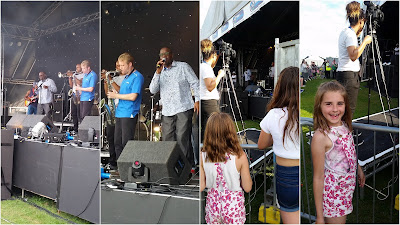 Although there was people everywhere, the crowds around the stage were quite small which was great as we could walk straight up and fit in nicely at the front of the barriers. We didn't stay late enough for some of the bigger acts like James Arthur but we did get to enjoy the sounds of the very talented Musical Youth which brought back so many memories for me.

We had an amazing day, the kids enjoyed themselves and I did too. Our day was filled with joy, laughter and lots of smiles. Live music filled the air and community spirit shone bright throughout. Shardfest was really good last year but Shardfest was extra brilliant this year and we as a family can't wait for Shardfest 2017 so that we can do it all over again!

Posted by Christine Taylor at 02:44