Our Day Out at LEGOLAND Windsor - Even the Rain couldn't keep Us away! #Review

Our Day Out at LEGOLAND Windsor.
Even the Rain couldn't keep Us away! 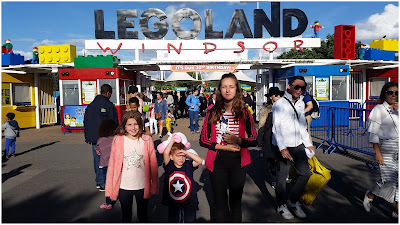 Last weekend we made the 2 hour car journey to LEGOLAND Windsor for Ryan's 6th Birthday treat. Despite trying to get there early we arrived smack bang in the middle of rush hour. Arriving at 10:15am is not a very good idea as everyone is arriving around then. The car queue was a little long but eventually we made it to the car ark and into the park itself.

Once inside the park we headed straight for the far side of the park as a friend had told me a week earlier that this was a good idea if we wanted to avoid the crowds who would all be starting at the start. I think it worked a little as the queues on that side were a little shorter than many of the ones we had walked past. Queues with children are never much fun so we were determined to make our day go as well as possible without wasting too much time. 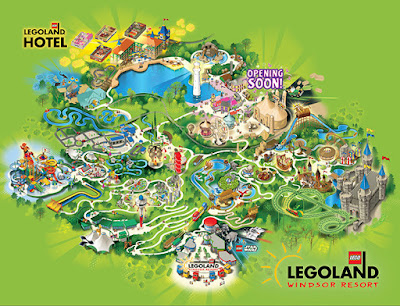 There's lots of different Lands within LEGOLAND but everything is quite spread out so there was lots of walking involved. Luckily my three are all used to walking so it wasn't that much of a problem for us plus all mine are aged 6 and above so they were very much able. I think throughout the day we managed to go on about 6 rides in total as the queues were up to a 40 minutes wait at times. We tried to avoid these ones and go to the smaller ones instead. We went on the Dragon ride which was fun although I kind of wished that it would go around twice to make it last longer seeing as we had waited so long to get on it beforehand.

My favourite ride was the Atlantis Submarine Voyage where we boarded submarines and got too see lots of sharks and fish. I really thought we would be seeing LEGO marine life so when we saw actual real marine life I was well excited, making this my favourite ride.

The Vikings' River Splash was lots of fun, we love a good water ride so this was top of our list to go on when we arrived. We waited until a little later in the day when the queue was shorter but it was well worth the wait just to see the kids faces when they got soaked.

The Space Tower was my little man's favourite. He went on with his Daddy and had a great time. Working together to pull themselves up to reach the top to fall down again. 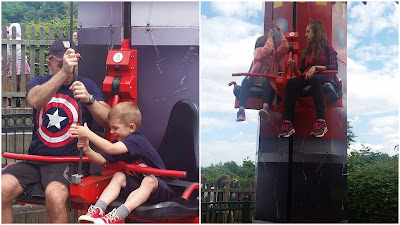 Ryan loves LEGO so the The LEGO 4D Movie Theatre was a huge success. If I'm honest I really enjoyed the show myself. The 4D effects range from foam to wind, to water to fire. 4D is pretty impressive to watch and the story was great too. We all loved the show!

There are lots of random LEGO statues dotted around the park. Lily and Ryan wanted their pictures taken with all of them but there's way too many to put them all up so here's a few. 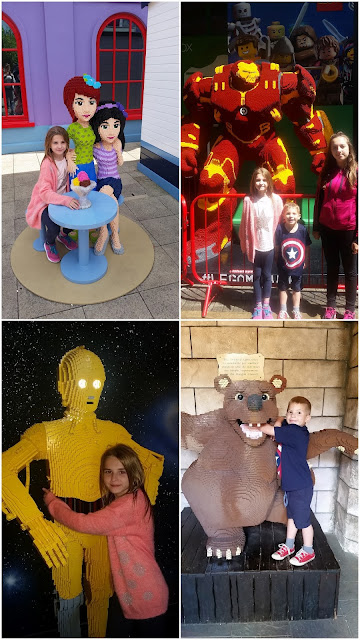 We spend a good portion of our day checking out the LEGO sculptures and enjoying the shows that were going on. There's lots to entertain the kids when you're not in the mood for queuing for rides. When the rides got really busy we headed off for something to eat. There's loads of places to eat but we went for the City Walk Pizza & Pasta place in Heartlake City which was an all you can eat buffet. Being Merlin Annual Pass holders meant we got a further 20% off the bill which was great as that saved us nearly ten pounds. On entering they asked the children's ages (mine are 6, 9 and 13) so I was delighted when all three of them came under children prices. Lots of places we've been to charge adult prices for the 13 year old so this was really good. It saved me a good six pounds, woohoo. 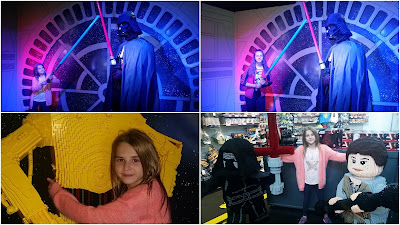 Ryan loved looking at all the Star Wars LEGO in the Star Wars exhibition but got upset when we left the centre as he wanted to play with the LEGO all day. I kind of promised him, I'd buy him some Star Wars LEGO as a late birthday present just to get him out of there. 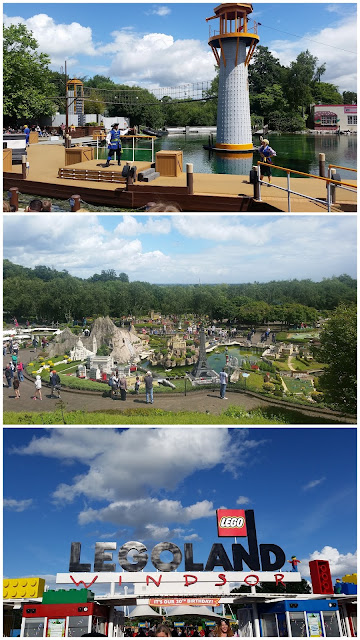 LEGOLAND is a big place so we didn't get too see everything or go on even half of the rides which means one day we will have to go back. For a day out it was good fun for the smaller two but the eldest did get a bit bored as there isn't much for older children or adults to go on. If you love LEGO like mine do then it's a must visit place, even if you only go once in your lifetime. We spent a good seven hours in the park but could have quite easily have stayed longer if it hadn't closed on us. Most of the rides closed at 6pm but they did stay open a little longer as we left the park around 6:30pm. Heading home took a while as the queue to get out of the car park was a little crazy. It took us nearly an hour to get out of the park.

Overall Ryan had a fantastic day and enjoyed spending his 6th birthday at LEGOLAND.
It may have rained a little but that wasn't going to stop us from enjoying ourselves. As people stood under the trees hiding from the rain, we were running to the next ride to get a head start. Getting wet was half of the fun as the rides we went on got us wet anyway.

We used our Merlin Annual Passes to gain entry and save ourselves 20% off our food and drinks inside. With over 32 magical worlds to enjoy, I wonder where we will head to next!

Disclosure: We are Merlin Annual Pass Ambassadors 2016. This visit was for my son's birthday. It is a review but all the opinions expressed are 100% honest and all our own.
Posted by Christine Taylor at 10:23