This Wild Pets Scorpion features sensors that can make it act and behave just like a real scorpion. Which is pretty terrifying if you're afraid of creepy crawlies like me.

Using the touch sensor on the back, you can control the scorpion to it your pet or leave it alone to enter 'Cage Mode' which will make it move around quietly and calmly on its own.

One touch will put the scorpion in an exploitative Adventure Mode but if you press and hold the sensor look out as your spider will be in Attack Mode and will chase down any target!

With cool LED lights which will change colour depending on its current mode. Realistic shaped body and moveable legs, this is the creepiest, wildest pet that you can tame. 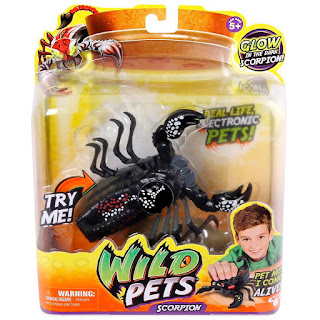 We've been playing with our very own Wild Pets Scorpion this week and have to say he's pretty cool. There are four different scorpions to choose from, we have the Stingback one. He has a simple on/off switch on the bottom for controlling it's power which is easy to see and use. The legs on this scorpion are quite soft and squidgy but boy do they move. When switched on the scorpion moves around at different speeds, in different directions and movements. He's very unpredictable which make him very exciting. With three modes of play, Explore, Creep and Attack. There's lots of fun and enjoyment to be had with him. 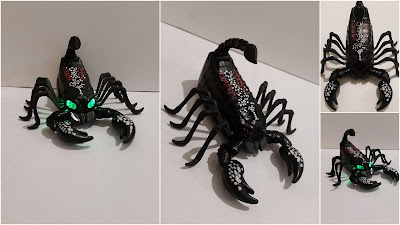 These new Wild Pets Scorpions are aimed at children aged five and over. My little man who is currently five loves him. There's nothing boring about this toy, he moves around, has LED lights and even glows in the dark. If you're little boy loves creepy crawlies then they'll love these. If you don't like scorpions, they have new spiders to collect too but I think the scorpion is more than scary enough for me. I know my Ryan would love one though.

Wild Pets Scorpion - Stingback gets a whopping 4/5 from us here. It's great fun and for it's price of just £12.99 we think it's well worth it. It gets a firm thumbs up from all of us.

Disclosure: We received our sample in return for an honest review.
Posted by Christine Taylor at 13:04