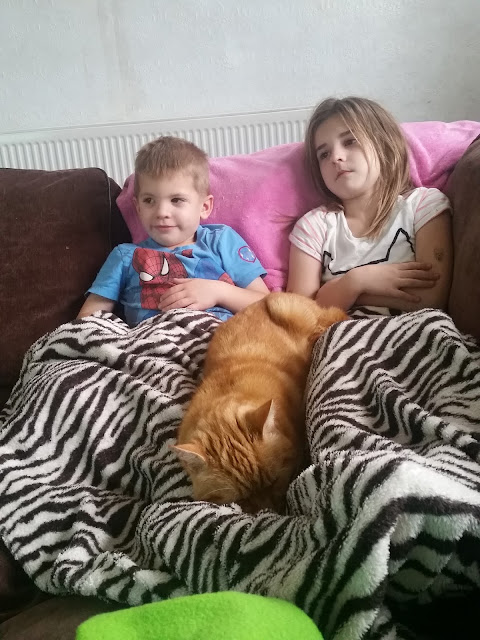 This past week has been filled with all sorts. There's been almighty highs and lows, screams and tears but also hugs and kisses too. It's been one heck of an emotional roller coaster.

My little man has had a tough week suffering with an ear infection but he's been so brave, he's hardly moaned at all. He's not really a complainer although we did see several tears outbursts throughout the week when it all got too much for him. A trip to the local Walk In Centre with a two hour wait and a course of antibiotics later - I started to see a happy boy again although he did try to milk it for as long as he possibly could. He's a clever little man who realised that his teacher was bribing him with 'dojo' points (which is what they get for being good in his class) if he went into school nicely and took his medicine when he needed it. He would have done these things anyway but once he'd realised he could get something out of it, my mornings suddenly became hard work. He'd be fine then play up once his teacher was looking, waiting until they'd make him the offer, he does make me laugh!

It's been a week of big choices for my eldest daughter as it's Options Time at school. It's nothing like it was when I made my Options at school but that was a very long time ago. It's not just GCSE's now but they've added lots of other equivalent graded courses too. Being the 13 year old girl that she is, she tried to opt for all the 'easy' courses but I soon put a stop to that. We had to sit down and have a long talk about her future and where it could go. After lots of discussions, moans and tuts, I think we finally came to an agreement. I may be tough but deep down, I only want what's best for her and these Options choices are a big deal. So she won't be doing Art, Textiles and Creative Crafts but instead she will be doing History, Business Studies and Creative Crafts (<< This one I had to give in on something).

Last but not least is my middle daughter Lily. I'm pleased to say Lily is doing just fine, better than fine. She's been doing really well at school lately and loves to read and write just like her Mummy (which makes me very proud). She's always tucked up in bed with her kindle at bedtime and enjoys writing creative stories which she often shares with us at home. I'm very proud of all three of my children in very different ways. They're all beautiful inside and out!

So, our week has been filled with poorly children, big choices and bribery.

How's your week been?

Posted by Christine Taylor at 13:49