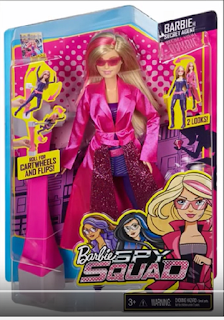 In the brand-new film Barbie: Spy Squad, Barbie and her friends Teresa and Renee transform from hard-working gymnasts to undercover secret agents in this exciting, action-packed adventure! When their amazing gymnastics skills catch the eye of a top-secret spy agency, the girls are soon following clues to a gem-stealing cat burglar who has escaped everyone on the case. With their high-tech gadgets, glam disguises and cute robo-pets, can they prove that smarts and teamwork can get the mission accomplished?

Its girl power to the rescue! Secret Agent Barbie doll is ready for her mission with awesome moves -- flips and cartwheels -- and great style too. She looks super cool in a purple outfit with belt and boot details, a removable sparkly pink trench coat and pink shaded sunglasses. When it’s time to surprise, take off Barbie’s long coat and plug the included spy gadget into her back. Twist the signature-style spy gadget one way and roll it to see Barbie doll perform cartwheels; twist the other way and roll to go the other way too.

Lily, my 8 year old Barbie lover was so excited when she saw the recent TV advert for this doll on our screen. On TV she spins, twirls and flies through the air making her look super cool so I was interested to see how she'd match up to Lily's high expectations in reality. 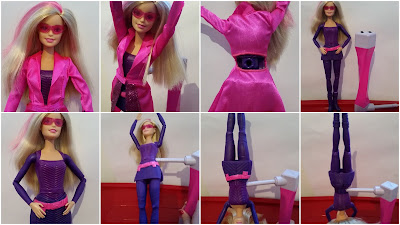 The Barbie doll itself is beautiful, Lily loved her sparkling pink overcoat and purple outfit underneath. It's a really girly looking doll, perfect for girly girls like my Lily. Lily loves bright pinks and purples so this doll was instantly a hit with her. If it's pink, Lily loves it!

After playing with her Barbie Spy Squad Secret Agent Doll for a while Lily wasn't too impressed with the moves made by the spy gadget, I think she'd set her expectations quite high and was then expecting it to move in lots of different ways when really it only goes backwards or forwards. You can make the moves differ slightly by changing her arm positions or moving her legs or twisting her waist to position her differently. But no matter which way she is positioned she still only really does back flips or front flips. Lily got bored quite quickly with the spy gadget moves so took her off it completely.

She still loves her but prefers to play with her on her own. They still have fun spy solving adventures together without the spy gadget to make her move. Lily's been enjoying making her do her own moves without it. Even without it Babrie can still jump really high, run really fast, flip forwards and backwards and even fly (or at least that's what Lily told me). 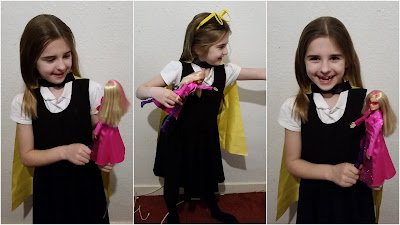 Overall Lily loves her new Barbie Spy Squad Secret Agent Doll. The pinkness element won her over pretty quickly and the fact that she has a pink streak in her hair made her even cooler. Lily now wants a pink streak in her hair too but she'll have a wait a good few years before that happens. This Barbie doll is very pretty and dressed to impress. I like the fact that her purple spy outfit is actually painted on so she's never going to end up without any clothes which has happened to some of our other dolls when their clothes get lost. The doll has good jointed arms and legs which move quite a lot making her movements really good.

For the price (around £19.99) she's a pretty good buy. You can't get many toys for less than this nowadays anyway but I'd happily pay this for a Barbie doll of this standard. There's no little pieces or accessories to lose and the one outfit is permanent so that's a plus too. The face is very pretty and her hair is lovely too. Overall I'd give her a 3/5 for play value.

Disclosure: We received our doll as a sample in return for an honest review.
Posted by Christine Taylor at 10:06