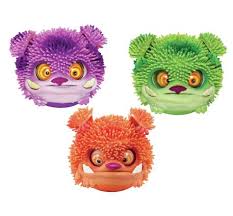 There's a new lovable monster in town and he's sure making lots of noise. Meet the Xeno Koopies from Flair, the loveable yet cheeky little monsters who interact and play with you!

They have glow in the dark eyes and a very tactile feel. They make over 70 different sounds and have 6 touch interactive sensors on their bodies. Xeno Koopies roll on the floor, bounce from one hand to another and can be squeezed and stretched. They like and dislike your music and love to eat; which occasionally leads them to let out a little burp or even parp. They are very sensitive little monsters, so don't shout at them or they'll get scared!

For enhanced interactivity, Xeno Koopies love to talk to their other Xeno friends - either another Koopie or a Xeno. You can download the free app to play additional games and explore Xeno Koopies world. Xeno Koopies are available in a variety of colours so collect them all. We've been playing with an orange one and here's what we thought. 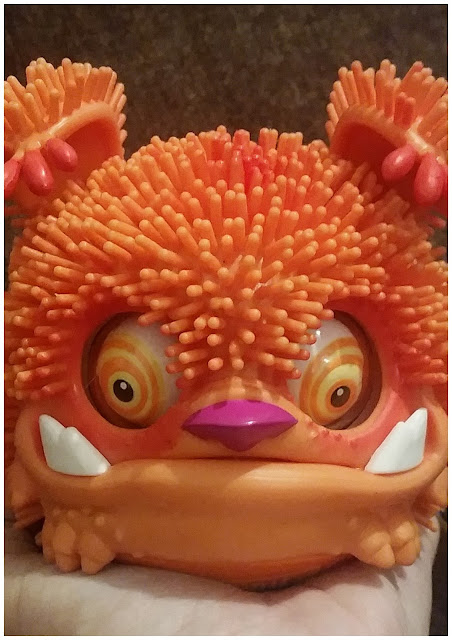 Xeno Koopies are brightly coloured and feel kind of weird to touch. You can pull them, stretch them and pass them from hand to hand. They move around the floor or whatever surface you place them on using the vibrations that they make. They do like to make lots of noise, that's for sure. Some of the noises they make are rather strange and odd, they reminder me of a little grumpy old man. They make lots of random noise (not words) just noise. It's not very loud but it is quite repetitive. We wasn't quite sure what to make of them. 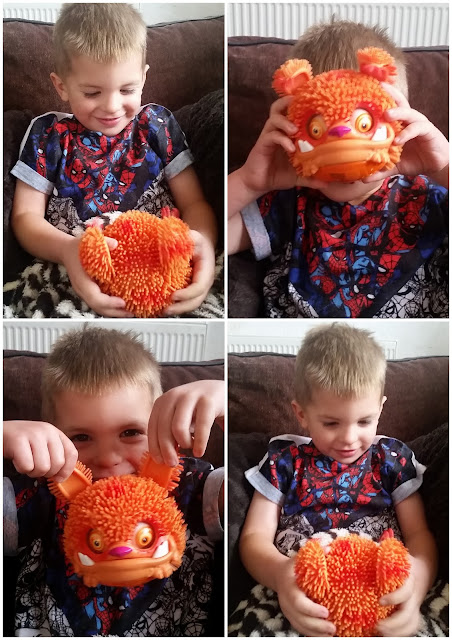 Ryan, who's 5 seemed to like him but Ryan likes noisy toys that get on Mummy's nerves. Batteries are not included with this toy so you will need to buy some, I bought some cheap ones and have to tell you, that wasn't a good idea as they ran out after just one days use. There is an on/off switch at the bottom but even with it turned off for most of the day, our (cheaper alternative) batteries ran out very quickly which was very annoying for me.

The Xeno Koopies are noisy little monsters but they are very cute still. Ryan has enjoyed playing with him or using him to annoy Mummy (I should say) but either way I think he's taken a liking to it. I'm not sure if we would pay the retail price of £39.99 for one but that's a personal choice. If you like weird little noisy monsters, then this is one for you.

Disclosure: We were provided with our sample in return for an honest review. All the opinions expressed within it are 100% honest and entirely my own.
Posted by Christine Taylor at 02:58