We've been playing with lots of lovely Clangers toys from Character over the past few months as you may have noticed, you may have seen some of our previous posts about them already. Last week we received another new Clangers toy - the Clangers Home Planet Playset with figure. The contains; 1 x Playset with telescope and hammock and 1 x Granny Clanger figure and is aimed at children 3+. 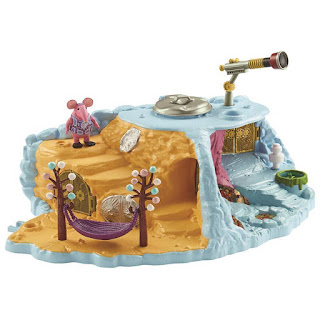 It's a solid playset that's almost ready to play with straight out of the box. There's only a few small bits to be added on but they're very easy to do and only take a few seconds of your time. There's lots of little things to do, you can press a button to see the Soup Dragon pop up or lift up the dustbin lid to reveal a secret slide! The telescope can be put in different locations and you can swing the Granny Clanger figure happily on the hammock. The playset is scaled for play with other Clangers Little Character figures & vehicles.

It's a nice little playset perfect for all young Clangers fans. With the help of some added Clanger figures, the world of opportunities is endless. It's a great base for their imagination to run wild and a lovely place for their Clangers figures to live, laugh and learn.

We also received a set of Clangers Family Pack of Figures to use when playing with our playset which did add lots more enjoyment. More figures obviously means more fun as it means there's a lot more going on at the same time. It also means there's more figures so more children to play with the playset at any one time. The extra figures made playtime a lot easier as there was enough figures for everyone to play with, meaning less fights and hardly any squabbles. The pack of figures include; Major, Mama, Small, Tiny & the Soup Dragon. 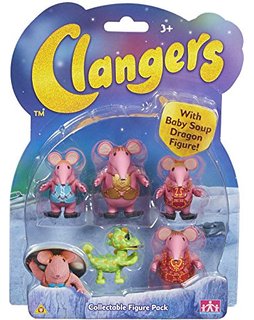 That's another 5 Clangers figures to enjoy. It's the perfect accompaniment to the Clangers Home Planet Playset with Figure as it allows your child to explore the Clangers family further. My youngest two have enjoyed playing with the playset and all their new Clangers friends although they do seem to be playing with the figures more than the actual set.

My two might be a little old for this kind of playset but it would be perfect for younger Clangers fans. I'd say 3 year olds would get more enjoyment out of it than mine did but that doesn't mean that we didn't like it. It's a lovely set, just a little young for us.

Disclosure: We received our sample in return for our honest review. All the opinions expressed are 100% honest and entirely my own.
Posted by Christine Taylor at 06:43