Check out the New TMNT Toys from Flair #Review #Vlog

Check out the New TMNT Toys from Flair

Over the past few weeks we've been busy playing with some new TMNT (Teenage Mutant Ninja Turtles) toys from Flair. My little man (aged 5) has been in his element, being a toy tester has never been so much fun. He's had such an amazing time, he really has. 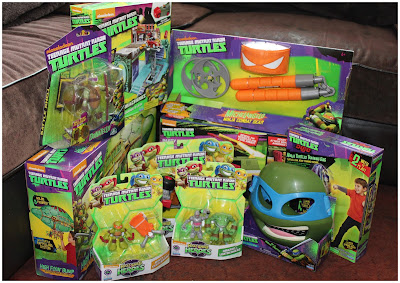 We were sent a huge bundle of TMNT toys to play with to see what we thought. I had one very happy little boy on the day these arrived, I mean who wouldn't be excited at the sight of all these new toys to play with. Our bundle included toys from both the original TMNT's range and some from their the Half-Shell Heroes; which is their preschooler range. 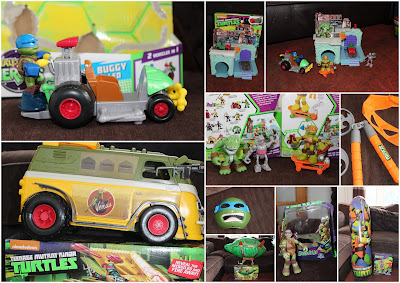 We had a total of 8 new toys to try out in total so this might take a while. I've tried to round the toys into groups of how they would be played with as to not make my review too long and bore you. We've also made a Vlog (our very first one) for you to see the toys in action. 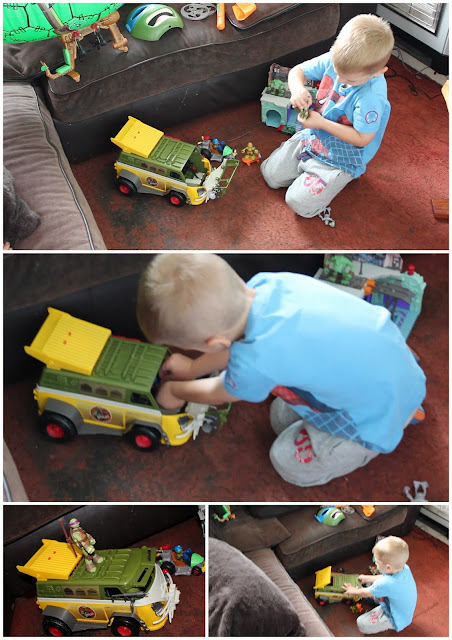 Up first is the  TMNT Party Van which is a perfect retro-vehicle for your classic turtles figures to cruise around in. There's lots of opening doors making it easy to put your turtles inside. It's a nice chunky vehicle making it more robust for younger or rougher children. Ryan's favorite part was the hidden missiles on the moving roof compartment which he enjoyed firing out at people (generally me) that made him laugh a lot. 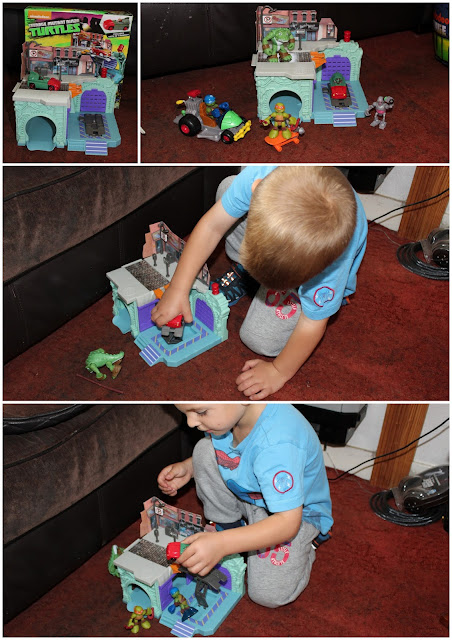 Next up is Ryan's favorite, the T-machines Garage & Lair which lets you explore the Turtles' world up close. It has two levels of play: a surface street level and an underground lair with sewer tunnel level! Out of all the toys, Ryan loved this one the most. This set includes an exclusive Raphael in T-Rawket figure but please note that the character is non-removable from the car. Ryan loved pushing the car around the set, up and down the ramps and into the enemies. It's a simple set made up of click together pieces but Ryan really like it. 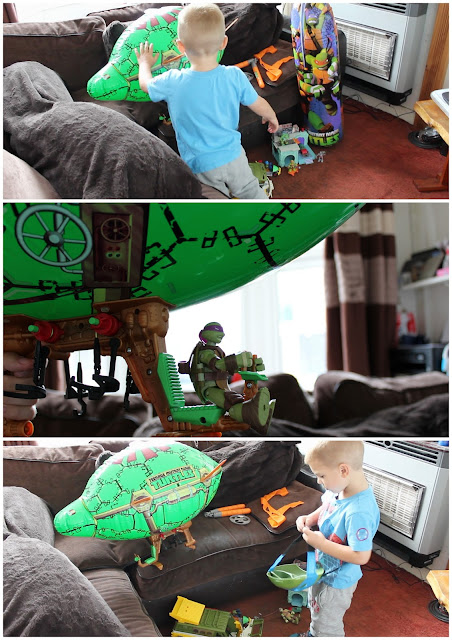 The biggest toy in the bundle was the TMNT High Flying Blimp which allows your Teenage Mutant Ninja Turtles to take over the skies. You do need to blow this one up yourself but it didn't take me half as long as I had anticipated it would which is great news. The balloon itself inflates up to 30" and then allows you to place up to five figures in it's connected undercarriage. With button activated rappelling cords, the Turtles can swoop down from the sky to take down their enemies which was lots of fun although we only had one figure to try this with. Our  figure became the pilot and sat at the front in the cockpit seat most of the time. This is a really large toy so you do need a lot of space to play with it in. Up next we had some role playing toys. The TMNT combat gear set and the TMNT deluxe Leonardo Mask. We received the orange ciombat gear set which is the Michelangelo set. The set includes the Turtle's authentic noise-making ninja weapon of choice (nunchuck), their signature bandana and two throwing stars that will help transform you into your very own hero in a half shell! Ryan doesn't dress up very often but he did have a quick play with them. He's not a mask wearer really but he does like throwing things, so the throwing stars went down really well with him. He loved swinging the nunchuck around although he did struggle doing it right. I let him off though as he is only 5 after all.

Another toy from the role play range was the Teenage Mutant Ninja Turtles Inflatable Dojo Training Bag which Ryan had great fun with. Again this one needs to be blown up but remember to add the water to the base first before you blow it up or you'll have to do it all over again like I did. If you blow it up first, the water won't go in! Oops. The Training Bag is a simple toy that they can hit and pretend to train on, when you knock it over - it pops back up. 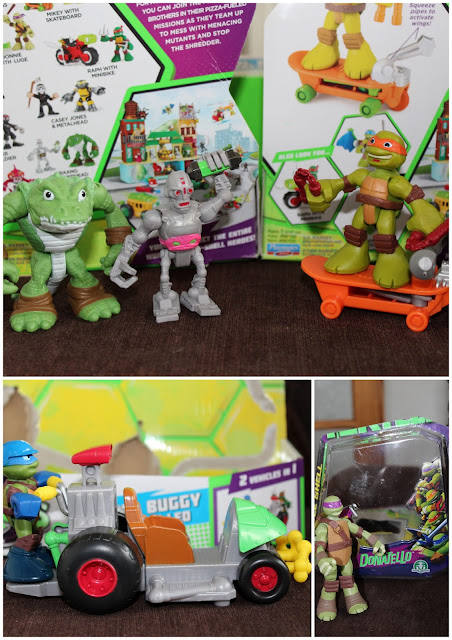 From the Half Shell Heroes range we had the Half Shell Hero twin pack and a Half Shell Hero figure with vehicle pack. The Half Shell Hero Turtles are much smaller and chunkier than the original ones as they're better suited for younger children just starting out. They have movable joints so their arms, legs and heads can be moved into different positions during play. The vehicles are interchangeable and very collectable, there's 9 different packs to collect.  this collection has brighter colours and less menacing expressions on their faces so they're perfect for a younger age. Ryan really liked them, they are mega cute.

We made a Vlog but it's not another review like the written ones above, I didn't want to repeat myself twice so instead we did a live, action play of what Ryan thought of the new toys and his very first impressions of them. I took our video of him seeing the toys for the first time and asked him some questions to help him along on his journey.

Ryan has lots of fun playing with all his new TMNT toys. Two weeks after getting them, his favourite is still the T-machines garage & lair set although he does love the Half Shell Hero figures too. He plays with them two every day which is great to see, as always.

All of the toys were well made and have lasted, nothing has been broken although I have had to put the T-machines garage & lair set back together a few times after rough play.

Flair have produced some great toys that all little TMNT fans will love. My little fan is very happy with his new toys and now can't wait to add to his collection. How exciting.

Disclosure: We received out TMNT bundle in return for an honest review and Vlog. All the opinions expressed in this post are 100% honest and entirely my own.
Posted by Christine Taylor at 03:47