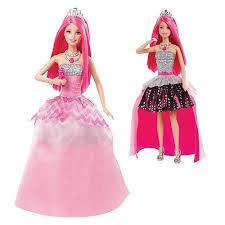 The Barbie Rock 'n Royals Courtney Doll from Mattel comes dressed all ready to rock. Courtney magically transforms from royal to rocker in one simple motion. You simply lift the pink microphone to her mouth to activate a dramatic fashion transformation and play two songs clips from the film Barbie Rock 'n Royals. Courtney's skirt twists around changing her from a pretty Royal Princess to a trendy Rock Star whilst the songs play.

As a princess she wears a long flowing pink ball gown with a studded silver and a pink bodice and trendy chevron-print peplum. As a rock star she shines in a studded silver bodice and a high at the front, low at the back skirt with a pretty black and pink graphic print. She has a stunning silvery tiara, necklace  and matching shoes too which are all very pretty.

My Lily (aged 8) has been playing with her very own Barbie Rock 'n Royals Courtney Doll this week and has lots to say about her. Lily loves her ever growing Barbie collection and is always thrilled when a new one arrives for her to play with. Lily loves to sing so this doll was perfect for her. She's forever changing the skirts just to hear the music play so she can sing along. I'm not sure how many times I've heard them play now but Lily loves them. 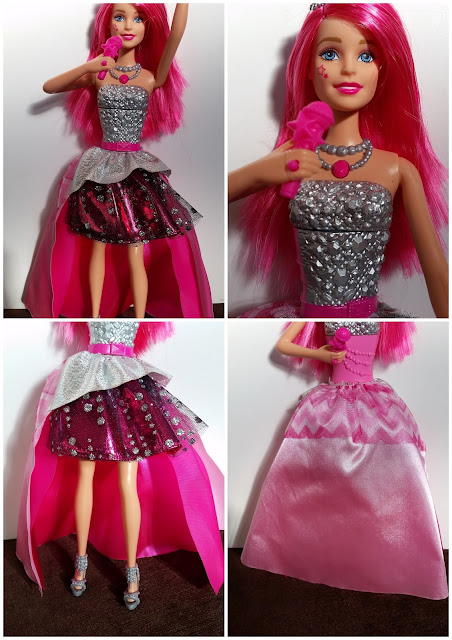 Both of Courtney's dresses are very pretty (as you can see above) but the Rocker one is Lily's favourite. She loves the shorter front style which is covered in sparkles as Lily loves her sparkles. Each time you move the microphone and change the skirt, one of the two music clips will play. Each clip is only around 5 seconds long and stops once it's played. She plays two different clips from the movie, repetitively one after the other. As an adult it gets kind of boring and annoying but as a child, Lily doesn't seem to mind. She still happily sings along each time they play which makes all the noise worth while I guess. 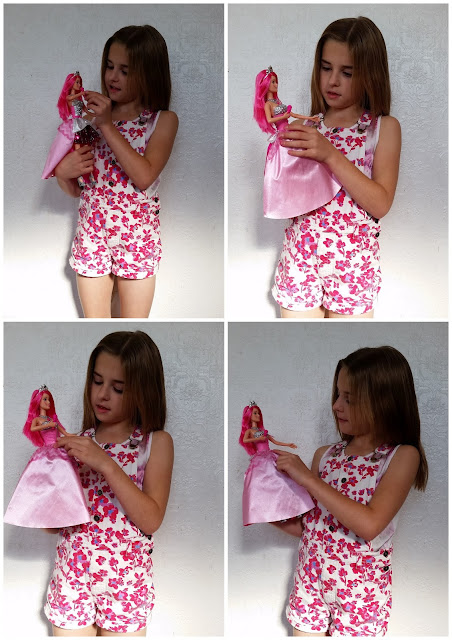 So why choose between royalty and rock when you can have both? In the Barbie Rock ‘n Royals movie, a princess and a rock star come together to discover anything is possible when they work together! And even though they’re from different worlds, they learn to appreciate the princess and the rocker inside each of them. This singing Courtney doll celebrates both looks with the ability to instantly transform her look from princess to sparkly show-stealing rock star. It's a beautiful doll that gives you two very different outfit looks without actually having to change her clothes. It's a very clever idea and makes playing with her easy and fun. Lily loves her new friend and loves singing along with her even more.

The Barbie Rock 'n Royals Courtney Doll is lovely, she's very sweet and both dresses are nice and age appropriate. The microphone is non removable which is great as it can't get lost. Courtney's hair is pretty in pink and long enough to brush and style, Lily now wants pink hair too but I'm afraid she's going to have to wait a few years before that happens.

There will be no pink hair dye in this house so for now Lily will just have to enjoy playing with her new pink haired, singing friend which I'm sure she will for a good while to come.

Disclosure: We received our Barbie Rock 'n Royals Courtney Doll sample for free in return for an honest review. All the opinions in this review are 100% honest and my own.
Posted by Christine Taylor at 02:43