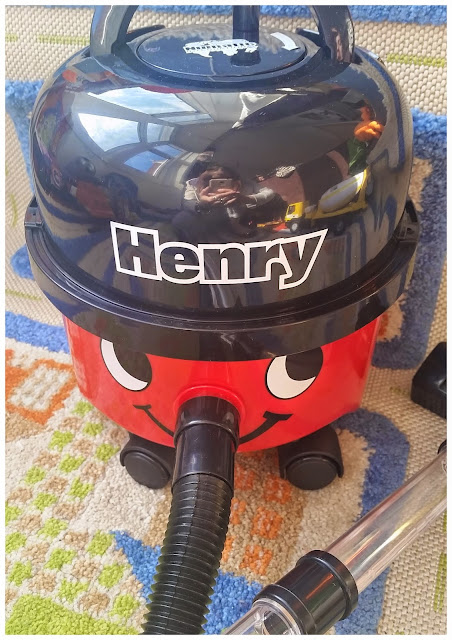 We've had a little visitor this week, Henry the Toy Vacuum Cleaner came to play. My youngest two were so excited when Henry arrived as I have a real grown up Hetty Vacuum Cleaner which they're always trying to get their mucky little hands on. Now they can have their very own mini version and clean along side me which is very cool.

Little ones love role play and pretending that they're doing jobs around the house – just like the grown-ups. It's one of the most popular games of all (well in my house anyway). Henry Vacuum Cleaner has been specially designed to be just like the real Henry, right down to the very last detail so your little helpers will get to feel just like a grown up as they help out. 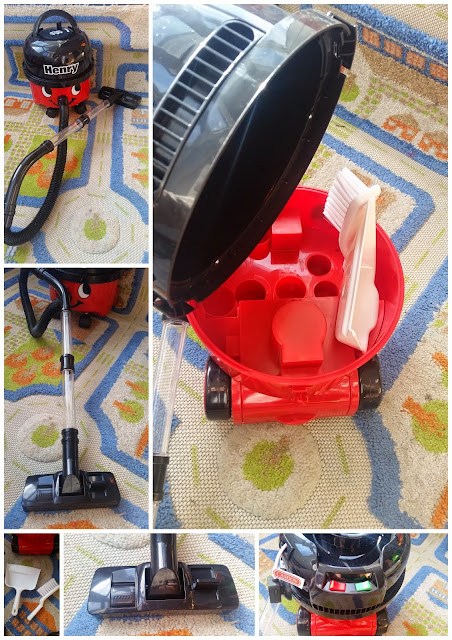 Henry is adorable, he's so cute. He may be small but he's an identical copy of his big brother. There's a 3 part hose with clear tubing and real life like switches on the base. There's pretend On/Off switches in red and green just like a real Vacuum but they don't actually work, they're just for show as the real on/off switch is on the back. Henry is on wheels so he can move around just a real Vacuum Cleaner and he even has the inside compartments too. When you unclip the sides, the top comes off allowing you to store all his parts inside along with a rather cute dustpan and brush which comes included.

Henry makes real noises as if he was really sucking up the dirt but sadly (for me) he doesn't actually clean my carpets. I guess that would be a step too far, wouldn't it? Mums would never have to clean the house again, haha (Just Kidding, I'd NEVER make my children clean the house) That's Mummys job. So for now, they're just going to have to pretend to help. Ryan loves it, he's been pretending to clean my living room all week. 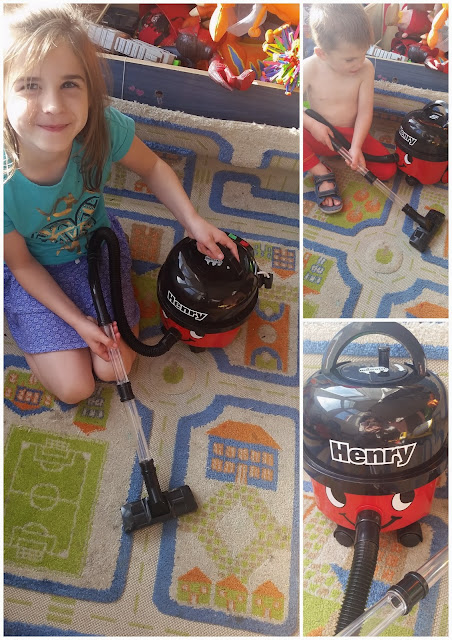 The kids have their own little rug in their play are so they're been giving that a good clean this week. Ryan's had to share with his big sister Lily (8) who'd been dying to get her hands on it. I can happily say, you're never to old to playing with Henry the Vacuum Cleaner.

Not only does Henry look great but he moves and sounds so real taking role play to a whole new level. My two have had so much fun playing with him this week, it's been a joy to watch.

If you're little ones love helping you when you Vacuum the house then Henry could be just what you need to get some peace and quiet or that extra bit of help. There's lots of other great toys in the Casdon Little Helper range, why not pop over and check them out.

Disclosure: We received our Henry sample in return for an honest review.

Posted by Christine Taylor at 10:29