Our #DoraAndFriends Party turned into a VIP Red Carpet Event!

Our Dora And Friends Party turned into
a VIP Red Carpet Event! 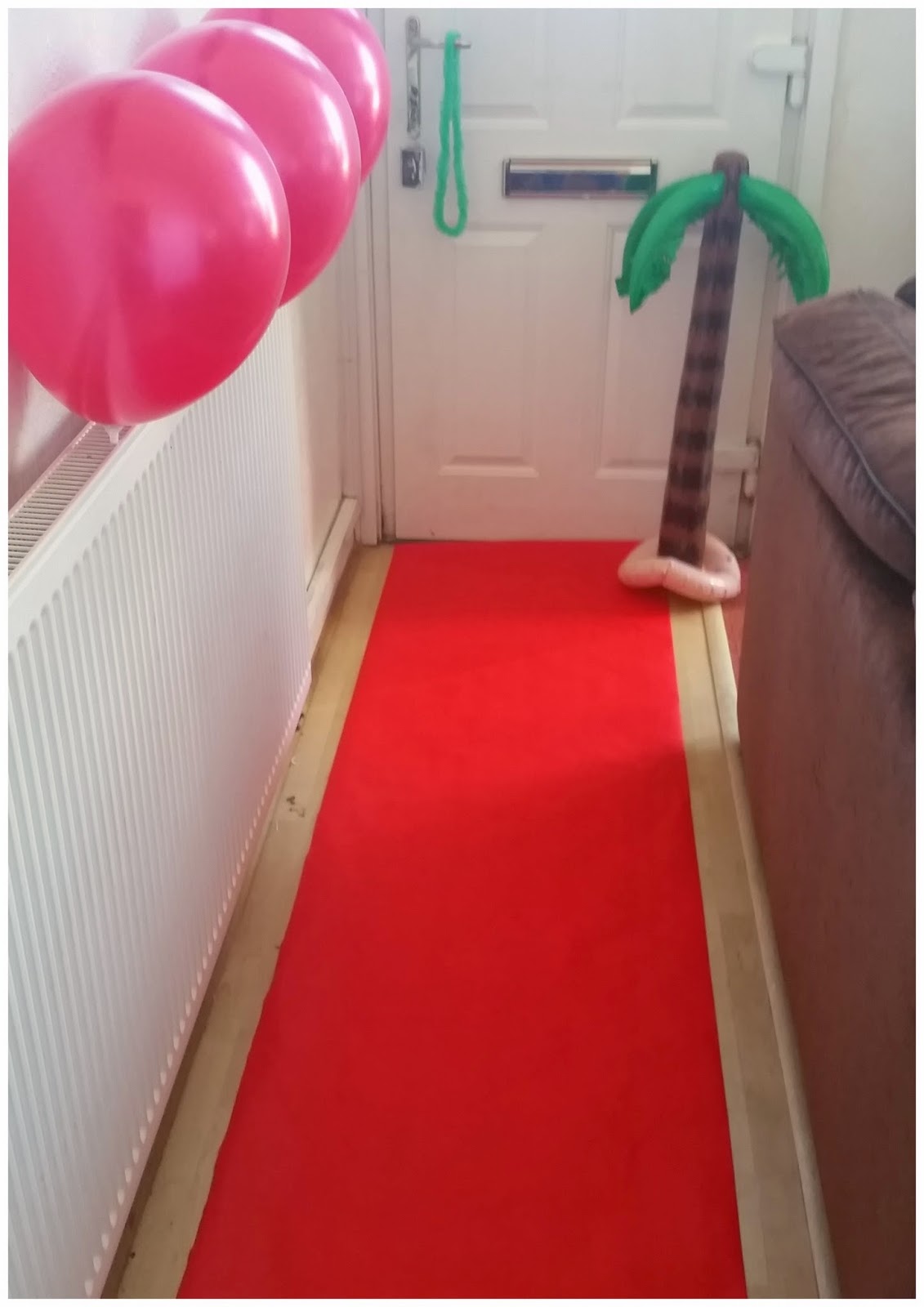 Today was the big day of our Dora and Friends Party. We laid out the Red Carpet quite literally for 6 small guests to watch the brand new episode of Dora and Friends: Into the City which was premiering on Nick Jr at 5pm this evening.

We set the scene for our Red Carpet event before they arrived, there was balloons everywhere, a Red carpeted walkway entrance and even an inflatable palm tree.

The food was served, popcorn was portioned out into cute individual boxes. Goody bags were stuffed ready to go and the games were laid out ready to be played. 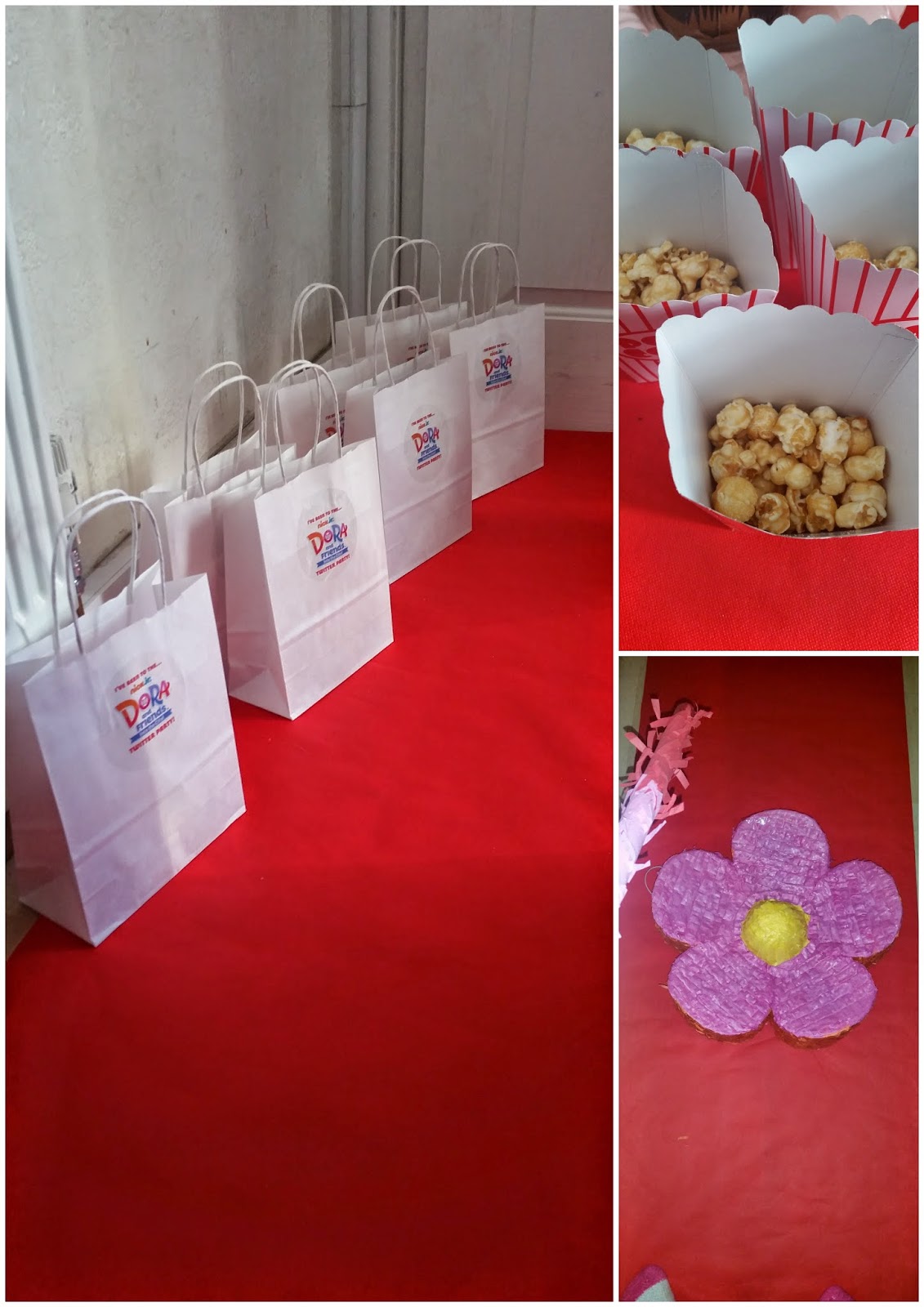 Our party began at 4pm, exactly one hour before the very first Dora and Friends episode was due to be shown. That gave us lots of time to play a Dora Quiz which was a great way of introducing the kids to all the new characters from the new series. The kids studied some glossy cards of all Dora's new friends before being quizzed all about them. There was prizes for the child who scored the highest but due to unforeseen tears I had to give out sweetie to all. I guess they all really wanted to win the Dora USB Charm Bracelet.

Next up was a colouring activity and cupcake decorating. There was lots of cute creations being made and eaten and trodden on but it was all good fun. I even managed to keep a sneaky cupcake aside just for me but shh don't tell the kids that. 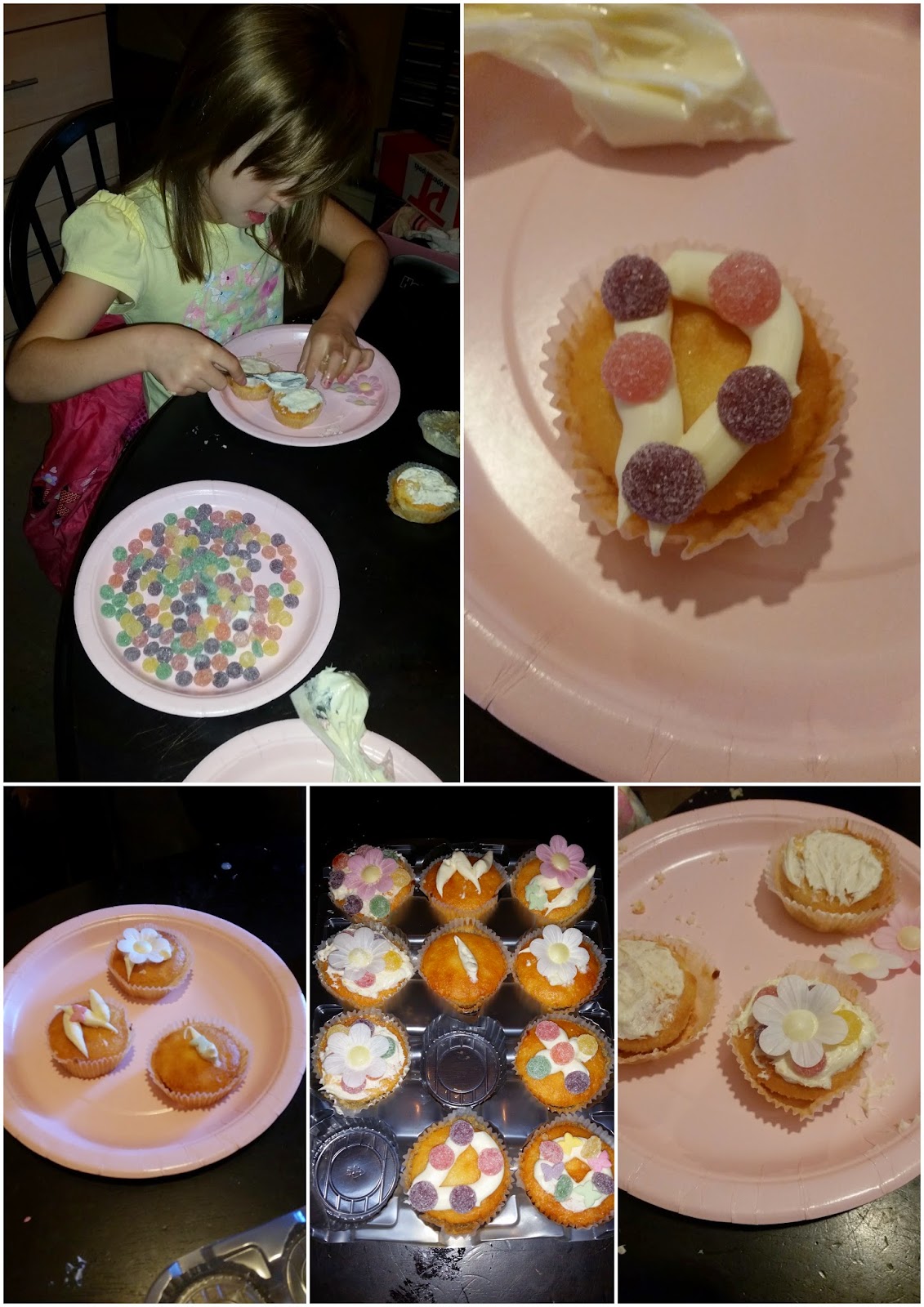 At 5pm we all sat down with our popcorn to watch the very first Dora and Friends: Into the City episode live on Nick Jr, we were all very excited.

The episode was all about rehoming dogs and helping one puppy in particular find his lost brothers. It was great to watch and the children loved it. There was singing doggies and Dora's new cool friends, it was lovely to see her all grown up like that. The show was a huge success, everyone sat still for the whole half hour. They were hooked. 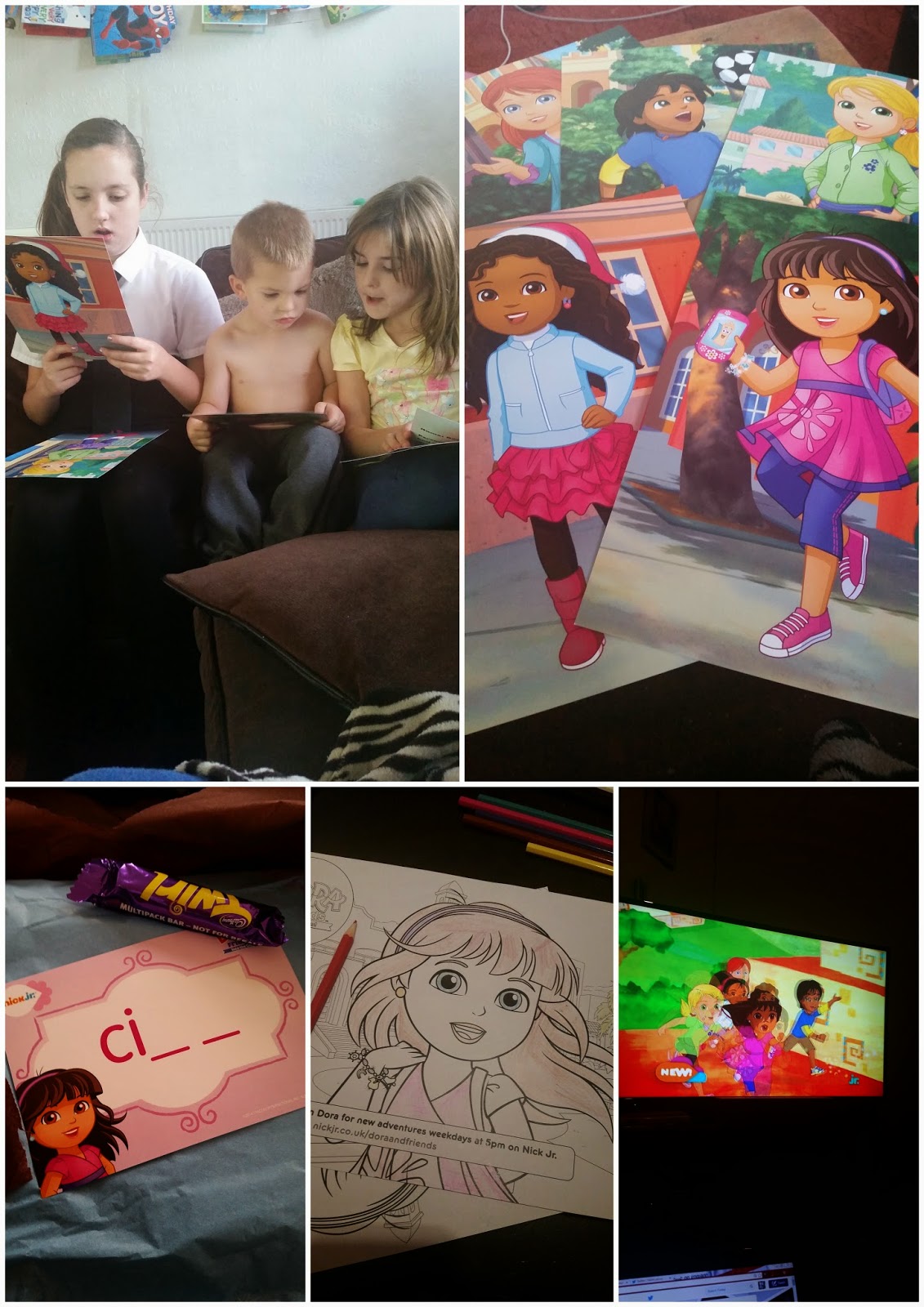 After the show it was back to playing games, we had a fun Pass the Parcel which was slightly different as it had clues to solve under each layer along with a small prize.

Next up was the Pinata which was the game that everyone was waiting for. I didn't hang it up, partly for health and safety reasons, partly because I couldn't find anywhere to hang it from so we laid it on the floor and took it in turns to give it a good bashing.

That pinata took some bashing, it took a good 15 minutes of beating before it cracked. There was no single winner in this game as we'd decided to share it out with everyone.
Just look at all the goodies that were hiding inside. 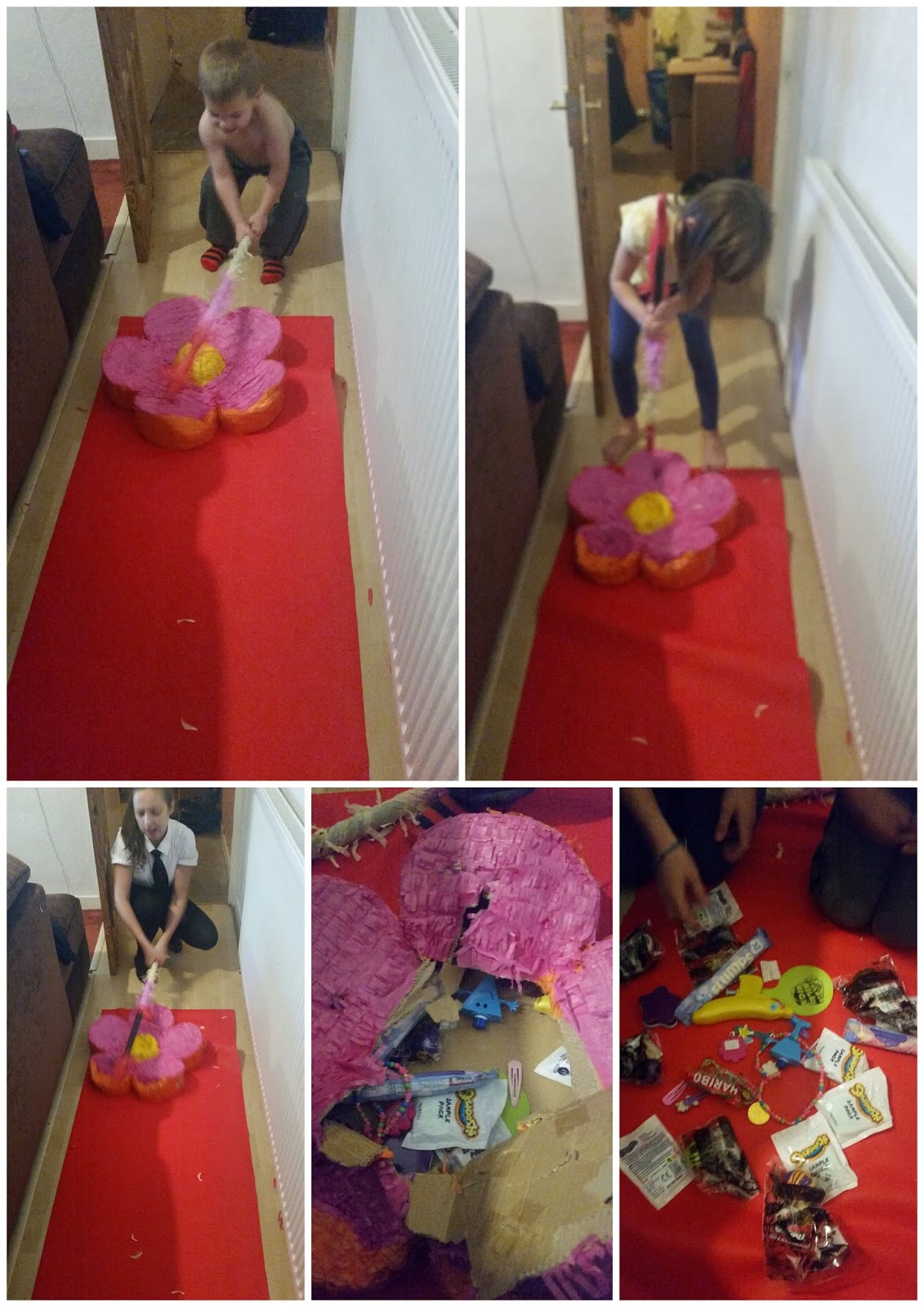 Today has been a good day for all of us here. We had lots of fun at the party and really enjoyed watching the first episode of  Dora and Friends: Into the City. I'm sure we'll be seeing a lot more of it real soon seeing as it was such a big hit.

I'd like to thank UkMumsTv for inviting us to host this party. We've really enjoyed it today and will continue to enjoy watching Dora and Friends as the weeks go on. We love hosting Twitter Parties, they're always chaotic but also so much fun!

Posted by Christine Taylor at 13:07