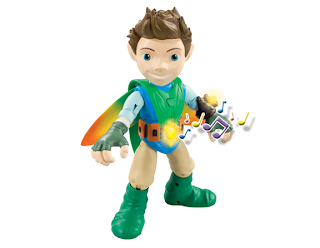 This action-packed, fully poseable Tree Fu Tom action figure has wings that magically pop out when you press the button on his chest. He plays the music from the hit TV show which automatically starts playing when you tilt him into a flying pose.

You can press the buttons on either side of his Sapstone Belt and press his Holopax to make them both light up and you'll hear one of over 30 Tree Fu Tom phrases. 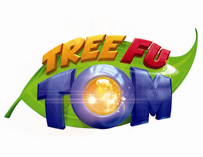 Tom is the main character in the very popular children's TV programme Tree Fu Tom which my little man loves. It's a very energetic show which joins Tom and his friends in a magical place called Tree Topolis where things are always going wrong. Tree Fu Tom uses movements to create magical powers to save the day. He encourages his watchers to join in with the moves to help him on his way. It's a fun filled , action packed show which youngsters love. 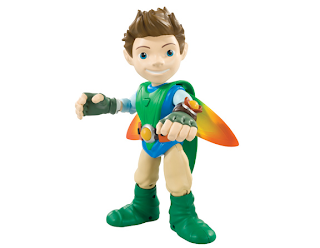 Ultimate Tom has over 30 phrases and sounds. He plays the theme tune music from the hit TV show plays when you tilt him into a flying pose and has fantastic articulated arms and legs which enables you to change him into so many positions. With his light up Holopax and Sapstone Belt there's lots of interactive fun to be enjoyed. 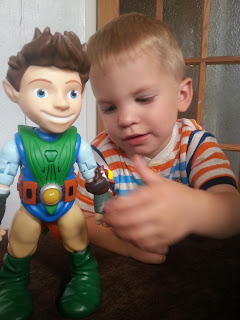 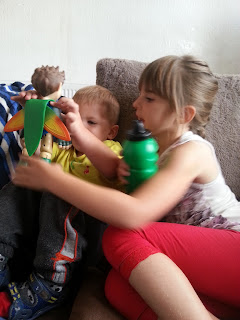 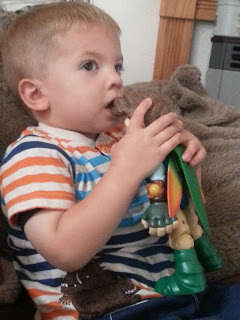 My little man hasn't really shown much interest in action figure toys before because they're normally quite small and aimed at much older children but he adores his new Ultimate Tom. This action figure is a nice chunky sized one full of interactive buttons, lights and fully poseable limbs. When his wings are out he plays music simply by tilting him into his flying position which is really clever. When his wings are in he says lots of different phrases from the TV show which is great, there's not 5 for over 30 different ones to hear. Ryan loves this toy, he's played with it nearly every single day since he arrived two weeks ago. He's even had to fight his big sister off on a few occasions as she's taken a liking to him too, everyone loves Tree Fu Tom. It doesn't matter how young or old, boy or girl, everyone can play with him.

If you have a Tree Fu Tom fan in your house then I'd definitely recommend this Ultimate Tom toy to you. The play value is fantastic, there's so many combinations of sounds and lights and movements making play time lots of fun. This is not just an action figure, Ultimate Tom is the Ultimate action figure.

Mummy of 3 diaries gave Ultimate Tom a fantastic 5/5 as we loved this toy and couldn't fault it. We received our Ultimate Tom for free for the purpose of this review but all the opinions expressed are 100% my own and completely honest.
Posted by Christine Taylor at 11:55