Mixi Scooter - From Three to Two wheels in a Flash

Mixi Scooter - From Three to Two wheels in a Flash 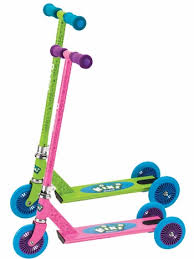 The Kixi Mixi is the perfect set of wheels for youngsters who are almost ready for big kid rides. The two-in-one Mixi gives kids the extra stability of three wheels while they need it, then transitions to a standard two-wheel scooter when they don’t. It's available in pink and green so there's a colour for both boys and girls but both come with bright blue wheels. 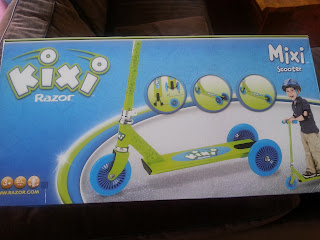 My little man Ryan was sent one of these Mixi scooters to try out last week, he was very excited to get going once he had saw the box. He loves to scoot and is getting very good at it now. I was really surprised at how easy it was to set up, it was literally straight from the box, click the handlebars up and tighten one bolt to fix the bar into a straight position. It literally took less than five minutes which was great for Ryan as he was hanging around waiting to have a go. 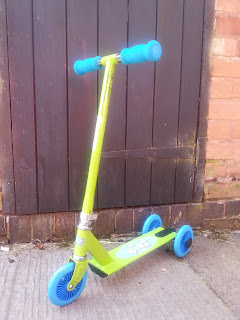 The scooter itself looks great, it's brightly coloured which makes it very appealing to the eye. It's nice to see a boys scooter in a different colour other than blue, it does have blue foam handlebar grips and wheels but that's ok. The Mixi scooter is very sturdy and build really well. It doesn't fall over easily and allows my little boy too scoot and feel like a big boy. 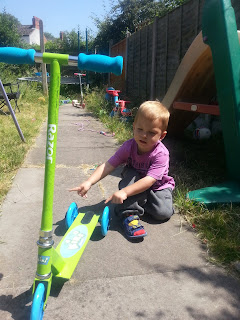 I think Ryan liked the blue wheels, he kept saying "Zoom Zoom" as he spun them around. The handlebars are a little higher on this one compared to him last but he got on just fine. Ryan's just turned three but he's still little in size, I was a little worried it would go too fast for him. After watching him playing quite happily for a while I soon realised his size didn't matter, he was happy and safe and having a really fun time. I think Ryan likes his new scooter. 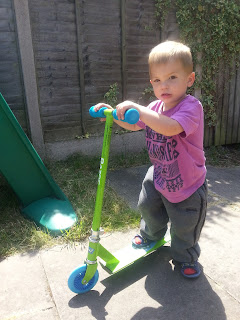 The Kixi Mixi scooter is a great little scooter. Ryan and I happily scored it a 4/5. It's easy to put together, it looks great and it works well. It's scoot tasticly good fun!
Posted by Christine Taylor at 13:18