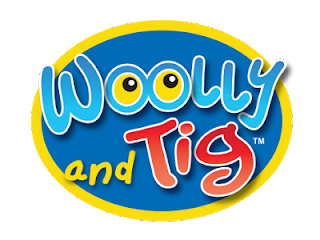 Woolly and Tig is the smash hit CBeebies show that has found a place in the hearts of pre-school girls and boys all over the country and, with such a huge demand for the programme, Golden Bear is launching some cute new Woolly toys this year so little ones can have their very own Woolly friend as quickly as possible! The series follows a three-year-old girl, Tig, and her toy spider, Woolly. The drama explores the feelings that children have when faced with new experiences, such as a first day at nursery school to meeting a man with a beard - uncertainty and anxiety are replaced with fun and laughter when Woolly comes to life.

Over this past week my little man Ryan and Wooley have become really good friends. They've been everywhere together, even pre school. Ryan's not taken to any other toy so well since Baby Jake but that's another story. We were sent 4 brand new Woolly and Tig toys to try out. A small Woolly Soft Toy, a Poseable Talking Woolly, a Jumbo Bedtime Snuggle Woolly and a Woolly Pick n Match Pairs Game. When they arrived, I laid them all out on the table and let Ryan choose which one he would like to play with first, can you guess what he choose? 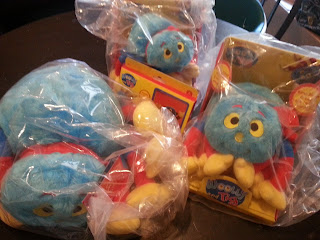 Ryan went for the biggest of course, the Jumbo Bedtime Snuggle Woolly. He's huge and soft and oh so cuddly. He's gorgeously bright and colourful too, he certainly caught Ryan's eye. Wherever we've been in the past week, Woolly has been too. They really have become the best of friends, when ever someone asks Ryan "Who's that?" He replies "Woolly is not a spider, he's my pet" it's very sweet. Who'd have known Ryan would have taken to Woolly so well. 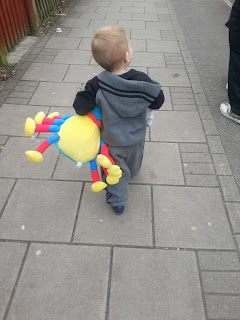 Ryan loves all his new Woolly friends, he likes to stack them up so they can all play together. Jumbo Bedtime Snuggle Woolly is on the bottom, Poseable Talking Woolly is in the middle and  the smaller Woolly Soft Toy is on the top. They're all identical in colour and equally as cute. 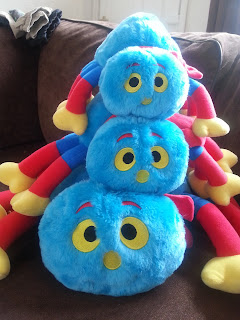 The Poseable Talking Woolly is the perfect comfort toy and the ideal companion for little ones who love to take a friend on the go! You can press his head to hear some of his most popular phrases and bend some of his legs to position Woolly into his favourite poses from the show. He’s great for giving little ones a confidence boost in new situations too as he is always on hand for a reassuring cuddle.

Last but not least was the Woolly Pick n Match Pairs Game which is always a great game to play in our house. It's a great learning game which is also lots of fun. These brightly coloured cards make this classic game so cute and even more fun. It's always more fun when you're playing with cute characters that your child recognises. It's a real conversation starter too.

Ryan and I are really enjoying playing with our new Woolly and Tig toys, they're truly delightful. I'm sure Woolly and Ryan will be having lots more adventures of their own real soon.

Mummy of 3 Diaries gives the new Golden Bears Woolly and Tig toys a very well deserved 5/5 which we don't give out often but had to this time as they're just so much fun.

We were sent the 4 toys mentioned above for the purpose of this review but all the opinions expressed are 100% honest and my own.
Posted by Christine Taylor at 06:17