Can you use one Duvet ALL year round? You can with Slumberdown

I am proud to say that Mummy Of 3 Diaries is now a very proud Slumberdown Blogger, we will be testing out some of their lovely products over the next few months. I never thought I'd be getting so excited about bedding but I am. It's rather strange for me as I'm not your typical enthusiastic housewife. I must admit I like to keep things simple and do as little as possible.

Our first item was a Climate Control Duvet which I was very excited about as until it arrived I didn't actually know such a thing existed. For the past how many years I've been swapping between two duvets all year round. A thick, warmer one for the winter and a much thinner, cooler one for the summer. Who knew that you could get one duvet that adjusted to your body temperature making it suitable to use all year through! Not me, oops. 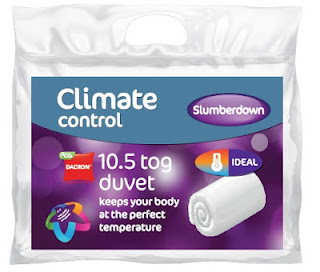 Our Climate Control Duvet arrived last week in a nice little bag which I couldn't resist opening right away. Within one hour of arriving it was all unwrapped and made at home on my bed. When I opened the bag I noticed the softness of it straight away. It felt so squishy, fluffy and soft. So nice in fact that I had to give it a big cuddle or two. I took a few pictures to try and show you what I mean, it's hard to see the fluff factor on pictures but I'll try.

These first two pictures show the duvet unfolded straight out of the bag. 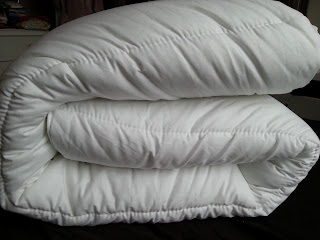 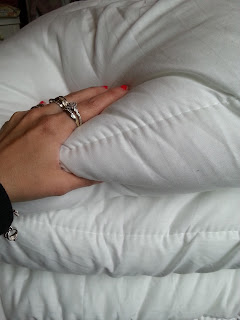 Once opened out the duvet is actually quite thin and really light. I was excited too see how it was going to keep me as warm as my thicker (old) duvet did. 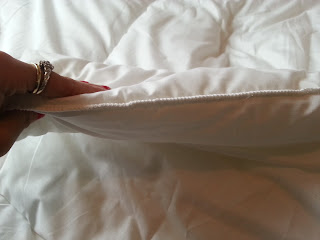 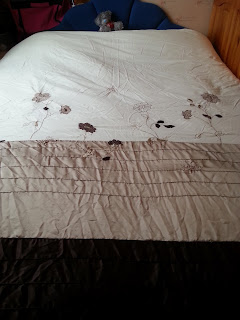 The last picture is my nice new Slumberdown duvet on my double bed all ready to sleep in. I've been using it for over a week now and feel I am ready to give you my thoughts on it. First off, I love the fact that it feels so light yet actually keeps you nice and warm. A cosy duvet means a cosy nights sleep, which is exactly what I've been enjoying. The only downside to my new duvet is that I don't want to get out from under it in the mornings. It's lovely and fluffy and really feels fresh. I'm not quite sure how it works but I can happily say that it does. I've been having some lovely nights sleep, the weather has been up and down like a yoyo but my sleep has been the same. The temperature outside has not affected my temperature inside which for us Britains is great. We never know what the weather is going to throw at us but at least now it doesn't matter, sleepwise as my new Slumberdown Climate Control Duvet does exactly what it claims to do. It keeps me at the perfect temperature to get that great nights sleep us mums need. I'm really happy with my new duvet. You really can have just one duvet and use it all year round!


The Slumberdown Climate Control Duvets are available in sizes: Single, Double and King in 10.5 tog. Their advansa fibres are technically proven to wick away moisture, creating an even temperature throughout the night, to prevent overheating whilst still maintaining tog. The fibres enhance comfortable sleep by transporting vapour from the body, permitting it to naturally evaporate into the atmosphere, thereby optimising the conditions for physical comfort and continuous sleep. The climate control fibres are encased in a luxury, soft touch poly cotton fabric. Their main benefit is their balanced temperature through the night provides a comfortable sleeping climate, resulting in a restful night. They're also machine washable.


Mummy Of 3 Diaries gives the Slumberdown Climate Control Duvet a 5/5 - HUGE Thumbs Up!


I was given my Climate Control Duvet for free for the purpose of this post but rest assured, all the opinions expressed are 100% honest and entirely my own.
Posted by Christine Taylor at 05:04