Is Drayton Manor's Christmas really as Magical as it says?

Is Drayton Manor's Christmas really as Magical as it says? 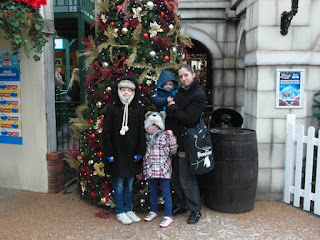 Yesterday, my family and I visited Drayton Manor Theme Park for our second time this year but this wasn't any old visit. This was an extra special, magical Christmas visit!

We arrived around 1pm and were nicely surprised to see an open entrance, there was no queues at all. Although the weather wasn't very nice we were so excited that we didn't really care. The rain wasn't going to ruin our family day out, oh no it wasn't! Our first stop was of course Thomas Land, our favourite place to visit ever. All the rides in Thomas Land were running and again there was hardly an queues at all. There was lots of people around but with so many different things going on I found everyone was nicely spread out making it easier to get on the rides over and over again. I think we rode the Crazy Bertie Bus three times in a row. Whilst in Thomas Land we saw the Fat Controller and his friends who put on a very sweet musical show for us all. There was lots of musical fun, laughter and best of all .. snow! Yes, there was snow (OK It was fake snow) but that didn't matter. It was beautiful. 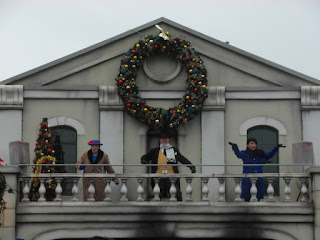 Here's us on some of the Thomas Land Rides: We really enjoyed all of the rides, there was something for everyone. Flying helicopters, aeroplanes, trains, buses and more! I must admit, I quite enjoyed the rides myself. It was nice to be able to share the kids experiences and join in the fun (Adults are allowed on the kids rides too) It was like being a kid all over again. 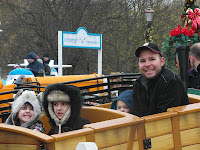 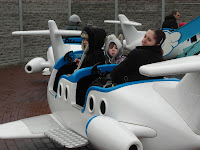 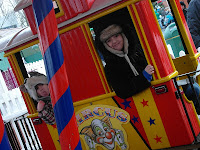 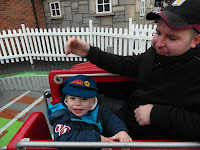 Some of the rides outside of Thomas Land were also open, we enjoyed many a ride on the Bumper Cars and the good old family Carousel. The park was very different without the usual hustle and bustle of the crowds but I wasn't complaining as we could just walk straight onto the rides without having to wait at all. After our sixth go on the Bumper Cars I must admit I was ready to see something else. I'm not a huge fan of all that bumping but my son Ryan was loving every minute of it. He just couldn't get enough. Once we'd had our fill of the rides we went off too visit the animals in the Zoo and had a snack in the Cartoon Network Cafe. It was hot chocolate's all round and very yummy they were. One thing I really liked was outside every restaurant or food stall they had put up large marques with free standing heaters to keep everyone nice and warm. It was great to get in from the rain and warm up every now and then.

Later on in the afternoon we got to enjoy a 15 minute Polar Express Experience in the 4D Cinema which was lots of fun. There was a great show filled with real water splashes, bubbles and snow. The kids enjoyed it very much, the story was very short but also very sweet. It was a clip from the film with added extra's too enjoy, I'm a huge fan of the original film so I more than enjoyed watching this. Great fun for all the family!

One of the main reasons for visiting Drayton Manor's Magical Christmas though is to visit the enchanted castle and see the big man himself, yep Santa. We were booked in too see Santa at 5.30 PM after the Believe firework show which was really clever as all the fireworks were extra quiet ones so that the animals in the nearby Zoo wasn't startled or scared.

I had noticed that throughout the day the queue for Santa was very long so I would advise if you can try to get a time for later on in the day like we did. Having a 5.30PM slot was great as we got to go straight in after the fireworks, no waiting at all. We walked along the castle's paths which were nicely decorated with lights, trees and reindeer's until we got to the doors. Once inside we were shown into a gorgeous room where we got to talk to Santa who was so lovely. He talked to the kids for a good ten minutes, not just the usual "What do you want for Christmas?" He was very nice. WE had our picture taken which we could then buy outside. I took one myself so that I could share it with you too which he didn't mind me doing (Bonus) If I'm honest I would have liked to see a little more, maybe some moving characters or something. The line must have been so long for those waiting in it earlier and I find it hard to see how they would have kept their children entertained and happy whilst waiting. Santa himself though was one of the best Santa's we've ever seen though. So jolly and friendly and very well dressed. 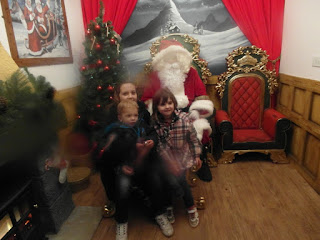 So overall we did have a magical day! We enjoyed all the rides and the 4D Polar Express Experience was awesome. The fireworks were very nice and Santa was lovely.

It did rain all day long so we did return home very soggy but also very happy which made it all worth while. Once the darkness had fell, Drayton Manor was lit up with some beautiful lights and lots of lovely trees. We did grab a few photos as we were leaving, the decorations were just too nice to walk on past. If you're thinking of taking your kids to the Drayton Manor Magical Christmas, I would recommend you do but please wrap up warm and be prepared for rain. It's a good job us British don't let our weather spoil our fun. I had a wonderful day and would do it all over again next weekend if I could. I'll leave you with a few of our pics. 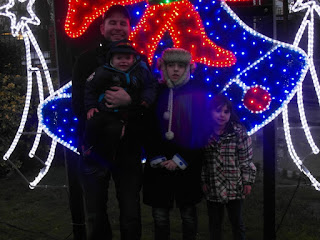 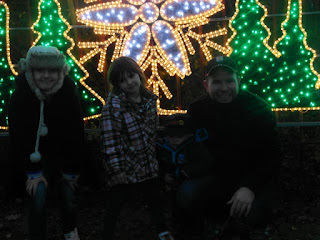 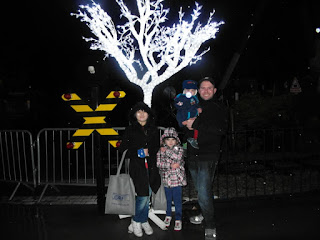 Posted by Christine Taylor at 09:08