I remember the day my son was born so clearly, like it was yesterday. It hadn't been an easy pregnancy at all. I'd had Morning Sickness for most of it and then just as that faded at week 34 I found out my son was Breech. From that very day I found out, I just knew my normal (easy) birth had gone out of the window. My two previous births had gone so well, I was actually looking forward to this one. Yes I know that may sound odd to you but it was true and now it was ruined.

I had scans every two weeks from that day on and even had an ECV to try and turn him around but he wasn't going to move, he was going to be a stubborn little man just like his daddy. I was booked in for an Elective Cesarean with just two days notice but I wasn't scared, I was just so glad It would all be over and I would finally meet my little man and that he would be safe in my arms where he belonged. All went well and we were soon back onto our ward, that is where this picture I'm about to show you was taken.

My son was born weighing just 6Lb 14Oz and was so tiny, well compared to my girls who were 8Lb 7 and 8Lb 8 he was. He was so small and thin but so very beautiful. He had a head full of thick black hair and the cutest button nose. Watching him lying there so sweetly on my bed, I remember watching his daddy stroke his face. It was in that split second that I realised just how tiny my precious little man was, there next too daddys hand he really was so tiny. 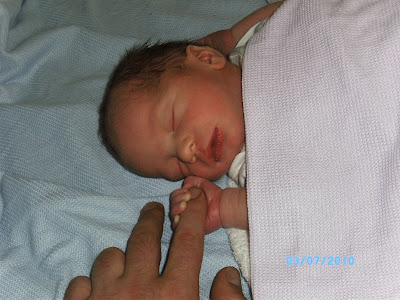 Daddys hand was so much bigger than my precious Ryan's head. When Ryan wrapped his tiny fingers around daddys I just knew that inside his heart was melting with pure love. I will always remember this story every time I look at this picture. It is one of my favourites and definitely one of my most precious.

“This blog post has been written as an entry into the Tots100 competition in association with Boots Mother and Baby“
Posted by Christine Taylor at 03:07