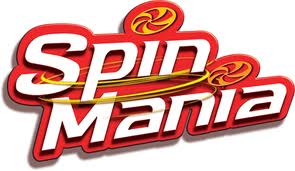 It's game time again here at Mummy Of 3 Diaries. This week we've been playing the fantastic Spin Mania game brought to us by Drumond Park, the home of many top titled games enjoyed by children all over the UK. We love a good game or two here in our house so we were very excited to get stuck in and have some family fun time. 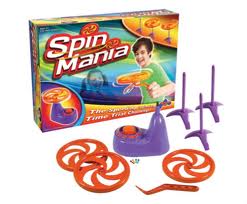 Spin Mania is unique, exciting, fast paced and action packed. It's contents include: 1 x Spin Base with built in timer. 3 x Spinning plates, 3 x Plate Bases, 1 x Plate Handle and 4 different coloured Scoring Pegs. The aim of the game is to spin all three plates - one at a time - and carry them on your spin spike to the three scattered stands. All three plates must still be spinning on their stands when you rush back to the Spinning Machine to stop the clock and mark your time. The player with the fastest time wins. It's a very simple concept which anyone can understand. Getting all three plates to spin at the same time however was a little more tricky. We were pretty rubbish to start with but we soon got the hang of it. It's easy with a little practice but then again most things are. Spin Mania is a fast paced game but it's very exciting. It's aimed at children aged 6 and over and the game can consist of two or more players. There was lots of giggles and laughs as we dropped our plates or simply couldn't get them to spin. Overall we had a great time playing Spin Mania and gave it a 4/5 for it's family fun score. 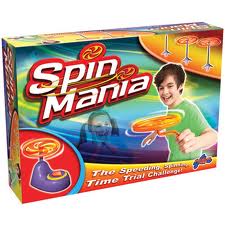 To win your very own Spin Mania Game simply enter using the RaffleCopter form below (It may take a few seconds to load so please do be patient) This Competition will close on September 30th and 1 winner will be drawn at random. Open to the UK only.