It's Back To School Time Again! 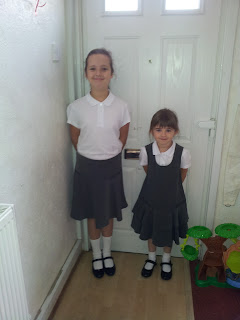 September is here again and that means one thing only, It's back to school time! September is the month where all the mummies out there are breathing a sigh of relief as their lives finally return to normal after a long 6 weeks of stress, noise and "I wants". I'm sure I'm not the only one who thinking how nice and quiet the house is today?
September is also the month where we've all now broke after splashing out on all new uniforms, accessories and shoes again! This school thing is really expensive, especially when you have more than one child that needs kitting out. I have two in school now, Chloe who's 9 has just gone into Year 5 and Lily who's 5 has just started Year 1.
My house was filled with excitement this morning as they happily got ready for their first day back at school. I think they'd really missed all their friends and were looking forward to a good old gossip and catch up when they got in. You all know us girls love a good gossip, no matter how old or young we are! The excitement of New Teachers, New Classrooms and a New Term meant a very noisy house this morning. Despite getting up early we were still rushing around like mad trying to get everything ready. An hour after getting up, we were finally all washed, fed and dressed ready to go. The playground was chaos, there was screaming kids everywhere. No one knew where to line up or where to go (even though they had been told when they broke up) which resulted in large groups of children just surrounding their teachers in a big messy muddle. Eventually they all went inside and I waved goodbye. What a relief, two happy girls back in school and one happy mummy. Well almost, I had one very unhappy little boy who sat there sobbing in his pushchair. I had totally forgotten about Ryan, the poor little guy had just lost his play buddies that he's shared so much fun with over the past six weeks. There went his company and his big sisters. Bless his cotton socks, he was so upset but worry not as mummy soon cheered him up with a treat from the shops. 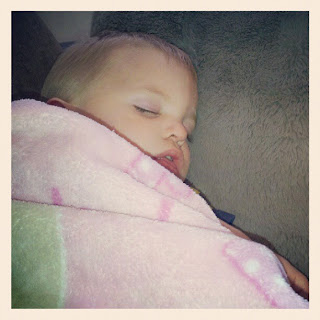 Today I managed to get my weekly food shopping done and go for lunch to catch up with one of my best friends Kirsty. I'd actually forgotten what a normal day used to be like after six weeks of mad ones. I can now look forward to days of playing with Ryan, days of getting housework done in peace and of course days of blogging and tweeting online.
Don't get me wrong, I will miss my girls but I'm sure glad they're back in school. The summer has been so long and I feel like they've changed so much. They need their routines and school life back and Ryan needs his daytime naps back. With the girls around, he's not had many of these until today where as you can see he is now snoring his little head off as I write this piece. Life here in Mummy of 3 Diaries household has resumed and all is well.
Posted by Christine Taylor at 06:01

Email ThisBlogThis!Share to TwitterShare to FacebookShare to Pinterest
Labels: Back To School