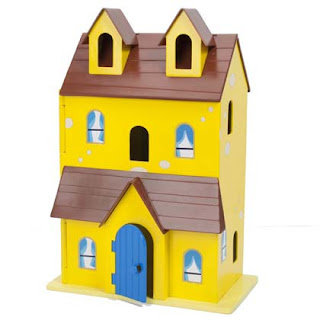 This Bananas in Pyjamas Fun House Playset is a 2 storey fun house which folds out to reveal lots of fun play features inside. There are posable B1 and B2 figurines dressed in their blue and white stripey pjyamas (of course) and there is also lots of moveable furniture including: 2 x beds, a sofa, chair and kitchen table and 2 x stools. 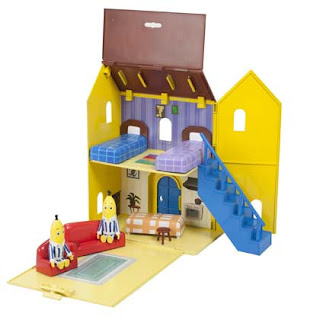 The Bananas in Pyjamas Fun House is a replica of the house that B1 and B2 live in on Cuddles Avenue. As B1 and B2 walk down the stairs there is an added musical surprise as the stair case starts to sing the famous Bananas in Pyjamas theme tune. This is a very sweet feature for little ones but a slightly annoying one for us mummies. My little man Ryan sat there pressing the little button over and over again. Ilet him off though as he was just so cute trying to sing along. You can store all the accessories inside the Bananas in Pyjamas funhouse once you have finished playing. The Fun House itself is 20 cm high and 15 cm wide which is a nice size. It's aged at children aged 3 years and over and requires 2 x AAA batteries which are not supplied.

We were sent our very own Bananas in Pyjamas Fun House to play with last week (for the purpose of this review) Ryan is only 2 and a half but absolutley LOVES this toy. He gets so excited everytime he sees the box and just wants it out all the time. It's a great toy for getting his imagination going but I do have to watch him because of the small parts and him being under the recommended age limit. The only thing that bothers me about this toy is the fact that it's so easy to pull apart. I know it's aimed at children 3 and over but even Lily (who's 5) kept spliting it up which meant that I had to keep putting it all back together. I must admit it has put me off getting it out now as mummy has had enough of hearing "Mummy, come fix it please" So if there was one thing I could improve it would be a stronger walls and floor connection. Maybe even a whole sold house altogether. That aside though, Ryan does love this toy. Much more so than I actually thought he would. Lily ahs played with it a few times but Ryan has been putting up a fight insisting that it's his, poop Lily. She's just dying to get her hands on it to play without him chasing her away. I took a few pictures of them whilst they were playing in action: 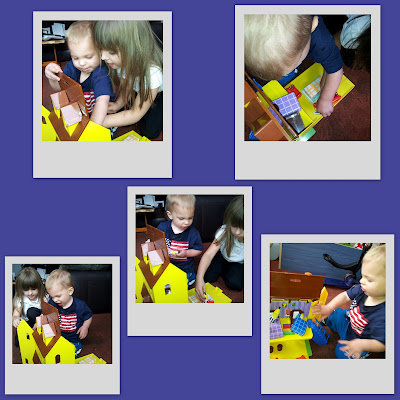 As you can see, they had a great time and lots of fun. Both Lily and Ryan gave this Bananas and Pyjamas Funhouse Playset a top marked 5/5 where as Mummy sadly gave it only a 3/5 because of the time I had to spend putting it back together for them. This Funhouse Playset retails at £34.99 and is available from Golden Bear Toys and other big toy store.

Posted by Christine Taylor at 11:49