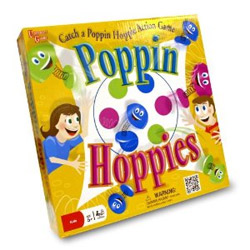 Poppin Hoppies from University Games  is a game of crazy popping madness where the characters randomly spring into the air for children to try and catch.  Your own Hoppie figure is made up of coloured puzzle parts and players must catch the corresponding Poppin Hoppies to collect the pieces.  The winner is the first player to catch enough Poppin Hoppies to complete their puzzle figure.  Stockists include Amazon and Argos. 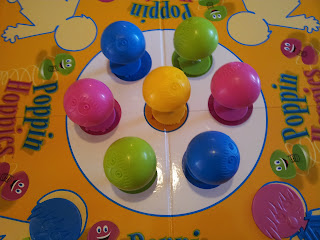 We were sent our very own copy of Poppin Hoppies for the purpose of this review but all the opinions expressed about it are my own. Poppin Hoppies is a fun filled game made up of bright colours, anticipation and lots of squeals. My girls and I LOVE this game, it's so much fun. We never get tired of waiting for them to pop, no matter how many times we play. Our hands just reach out eagerly trying to catch one at the right time. I must add it's a little easier for some than other, I'm great at this game whereas Lily (aged 5) has much slower reactions. 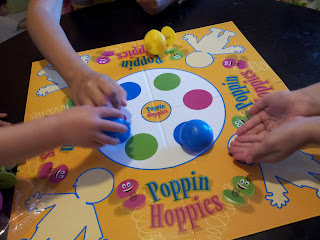 Poppin Hoppies is a great game, it's so simple to play and really is great fun for all the family. My youngest Ryan was a little young to play so we gave him the job of fetching the Hoppies as they bounced off the table, he was happy enough with that.
Poppin Hoppies gets a fantastic 5 out of 5 from all of us here at Mummy Of 3 Diaries. It's Exciting, Easy and Fun! What more could we have asked for.
Posted by Christine Taylor at 12:49