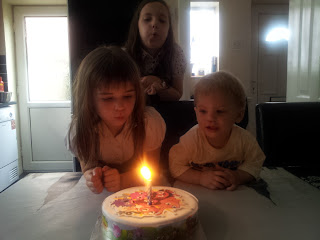 Today my little man Ryan celebrated his second birthday, I can't believe that he is now two years old. Where has the time gone? We played games and danced the day away. We had a lovely day and celebrated as a family. As you can see from this picture, my girls really insist on helping him with everything. Lily "helped" him blow out his candles and open his cards and gifts.
Ryan got lots of lovely cards and some really nice presents from our family. Ryan now has his first England football kit, two footballs ( which he loves ) and a fantastic car garage. He also got some Charley Bear toys from Mummy and a Mega Blocks pick up truck which he seems to have taken to already. Over all I think Ryan has had a nice birthday even if he didn't quite understand what was going on. Ryan's favourite thing today I would say was his three helium balloons which he really loves. He's spent most of the day just playing and running around with those.
The simple gifts really are the best gifts!
Happy Birthday Ryan
X xx X
Posted by Christine Taylor at 13:04