Last weekend the Mobilers headed to Birmingham to join the Olympic Torch Festival in Cannon Hill Park. The weather was a little crazy but then again so are we! So all was good!
We checked out the sponsors and the stands and played around with the new Samsung Galaxy S3 which produces the most fantastic Panoramic shots like the one above! 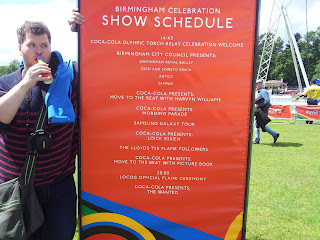 Dom checks out the show schedules, there was some pretty awesome bands playing. Twist and Pulse let the way for the Samsung show but the band that most of the crowd were there to see was of course The Wanted. Screaming teenage girls filled the crowd but the atmosphere was amazing. Samsung Bam Bams filled the air and took pride and place at the front of the stage.
Talking of Samsung Bam Bams, I have my own little Samsung fan at home who loves his pair! How cute does Ryan look playing with his. I have a real little Samsung fan in the making there. 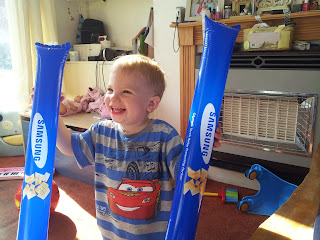 The Samsung Pin was back and looking good this week in Birmingham. Inside the Mobilers showed Demo's of the Galaxy S3 and Galaxy Note and generally talked with the public, answering any questions they had. Stacey and Alex were enjoying a quick S Beam Demo in the picture below. A simple yet very effective demo to show how the S Beam feature on the Galaxy S3 works so well. Even the Samsung Team themselves were pretty impressed! 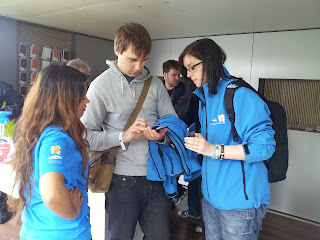 Birmingham was great, we had lots of fun and really got to show of the Galaxy S3's capabilities. The Mobilers work hard but also play hard. We finished off our day with a trip to the Birmingham Bullring Bull who stood proud wearing a Union Jack jumper. 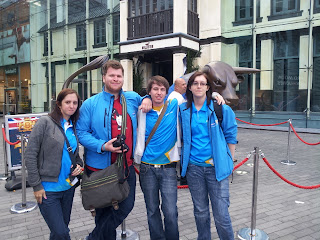 That's it for us for now but we have one final Olympic Torch Festival left to do and that's going to be the best one. London's Hyde Park is going to be an event to remember and us Mobilers are going to be there covering it all. Make sure you check us out on July 26th on Twitter. You can always see what we're getting up to by following the Hashtag #MobilersGalaxyS3

Posted by Christine Taylor at 12:08