This Weekend The Mob!lers Hit Liverpool For The Olympic Torch Festival 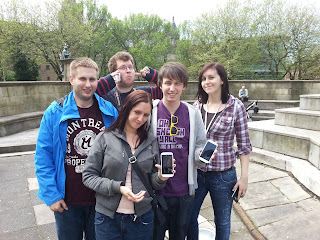 It's been a VERY busy weekend for us Mob!lers as not only did we all head up to Liverpool to Demo at the Olympic Torch Festival, we also got our brand new Samsung Galaxy S3 's!!
We arrived in Liverpool late on Thursday night, enjoyed a quick catch up and a delicious meal out together which is always fun when your in the company of the Mob!lers. We played with our new toys ( Ours Galaxy S3's ) until late into the night, well It was just too hard to put them down. I will be telling you more about the Awesome GS3 in my next post but for now lets get back to our fun filled trip to Liverpool.
Friday morning was spent seeing the sites of Liverpool and drumming up support for the new GS3 whilst we were at it. We staged some great photo shots and really just had a great time. The sun was shining and all was good in the Mob!lers land. Check out some of our shots: 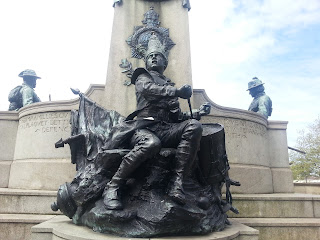 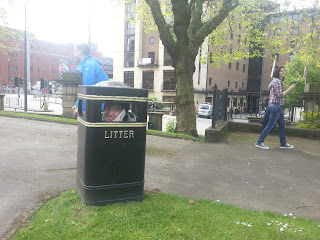 This shot has to be one of my favourites, us Mob!lers really do know how to get into the tightest spots, Mike even managed to squeeze into this bin which was very amusing. Later in the day we headed to the Festival site which was at the Pier, a beautiful spot to hold it if I do say so myself. The Mob!lers were all Branded and dotted around the Samsung Stand. We had lots going on at our stand, You could win Olympic Tickets by simply showing your support for the Samsung Sponsored Olympians which was great fun as I got to see meet so many lovely people. 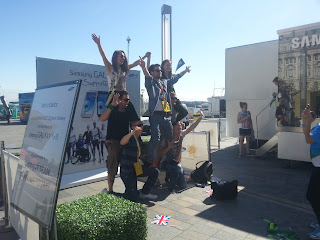 We had thousands of visitors to the Samsung PIN where everyone got to play with the new Galaxy S3 and the Galaxy Note for themselves, there was lots of excitement inside. Visitors could get their photo's taken with the Official Olympic Torch or get their Characterised photo drawn on a Galaxy Note which was pretty awesome, I know next time I'd like mine done. Unfortunately we didn't quite get enough time on this leg of our tour. 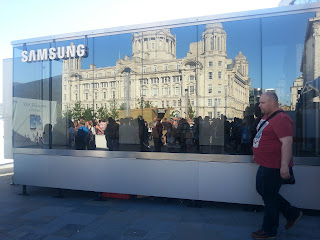 Check out the Awesome reflection in the PIN. You can see the crowds passing by in the reflection, I was told that there had been 21,000 visitors that day which is pretty cool. I helped manage the cues, handed out lots of freebies and got to show off my new Galaxy S3 to anyone who wanted a go. The atmosphere was electric and everyone had a great time. It was fantastic to see so many people turn up to support the Olympics and see the Torch at the Festival. Everyone was dressed up and waving flags and banners and streamers, it was a truly beautiful day. The sun shone on us all day and everyone had a great day.
Up on the main stage the crowds enjoyed dancing acts and local group acts as well as the main guys Twist and Pulse. The Wombats also played live which was so amazing, the tunes were rocking! Liverpool was just the first of five Olympic Torch Festivals that us Mob!lers will be attending and reporting about. Unfortunately I won't be attending the next leg in Edinburgh but I'll be back with the team in time for Leeds. So watch this space more Olympic Torch Relay fun and so much more of our Mob!lers antics. 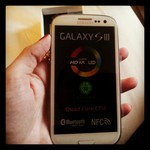 Now who's ready for meet the Samsung Galaxy S3??
Posted by Christine Taylor at 02:42