Spiro Bouncer Your Way Into Summer! 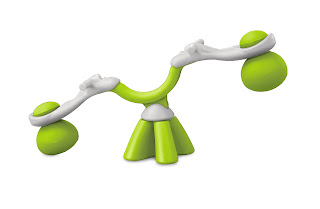 Have lots of active fun indoors or outdoors with this cool new toy. It's like a see saw, only better! The Spiro Bouncer spins a whole 360 degrees and bounces up and down. It has soft balls to cushion the impact when you touch the floor which is great for small people. We don't want an accidents now do we. It's a great idea, my two youngest love it already. It's arrived just in time for Summer which is perfect as we use ours outside in the Garden as space is limited inside. If you have a bigger home than me though, Spiro Bouncers have soft foam pads on the base to protect floors inside too. Sounds great, don't they? 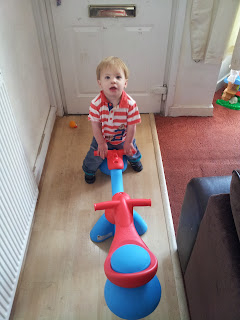 Here's Ryan  having a go on his own when it first arrived. The Spiro Bouncer is aimed at children aged between 2 and 5 years which is great for both Ryan who's 2 and Lily who is now 5. Unfortunately Chloe my eldest ( aged 9 ) is a little too old which she's not very happy about.
At first we did have a few accidents as Lily would bounce quite hard until Ryan fell off a few times but luckily no one was hurt as it's low enough to the floor to prevent any serious injuries. After a few goes though Lily soon learnt she had to be gentle with Ryan as he's still quite little compared to her. They soon got the hang of it.
The Spiro Bouncer is easy to put together, a little fiddly but not hard. The Instructions are clear and easy to follow which is always handy. The base is supposed to be filled with sand but we found that when we bought a bag of ordinary play sand, it wasn't fine enough to funnel into it so we simply filled the base with water instead which does the same job. It took around 15 - 20 minutes to put together as we had to pump up the balls too, but the pump was included so there was no need to worry. Everything you need ( apart from the recommended sand ) was inside the box. 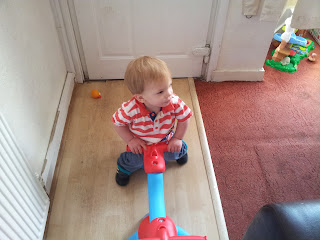 Our Spiro Bouncer now lives in our garden and gets played with nearly every simple day. It's perfect for developing strength, balance and co-ordination skills in young children. My kiddies gave the Spiro Bouncer a huge Thumbs up and a well deserved 5/5.
Spiro Bouncers are available from www.tptoys.com
Posted by Christine Taylor at 03:23