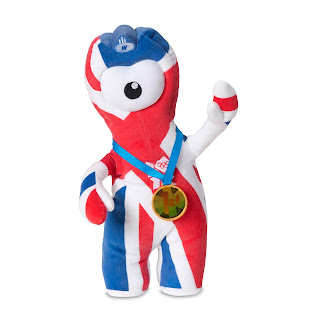 He's pretty cool! He has possible arms which are great for those "Night Fever" poses or even just plain arms out wide ones. Ryan likes to put Wenlock in a nice hug-able pose that he can give him a cuddle. Winning Wenlock is very patriotic, he's made of gorgeous soft materials and feels so nice to touch. He's very bright and looks lovely in his Union Jack patterns. He's also wearing a Gold Medal just like we all hope our Olympics team members will be at the end of the games!
The Olympic and Paralympic Games will see over 15,000 athletes from over 200 nations come together to compete and to commemorate the momentous occasion Golden Bear has a wide choice of plush mascots to choose from. Iconic mascots Wenlock and Mandeville are now well known figures and with everything from beanies, to soft key rings and even a giant 80cm plush, there’s a mascot to suit every style and budget!
Ryan loves his new Winning Wenlock, he's constantly pressing the foot to make it sing which is very sweet. He even holds his hands and dances along with him. 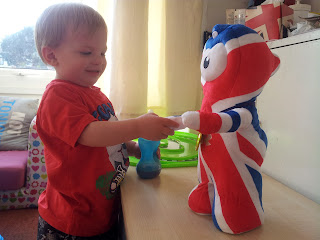 If you're supporting our team for the London 2012 Olympics then A Winning Wenlock could be just what you need to help you chant along - Why not check out the London 2012 Range over at Golden Bear right now.
Posted by Christine Taylor at 04:00