MONKEY IS FOR LIFE, NOT JUST FOR CHRISTMAS!
Competition. 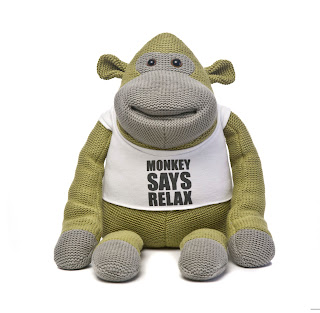 The nation’s best loved Monkey is set to be a Christmas must have with his own range of cool presents. Hitting shelves this October, there’s something for everyone, from dad to boyfriend, sister to uncle. He’s the perfect Yule time present!
Monkey first graced UK screens when his double act with Johnny Vegas featured in a series of ads for ITV Digital, quickly winning him a cult following. The demise of ITV Digital saw Monkey at the centre of a custody battle which resulted in him being adopted by the charity Comic Relief.   Since then he’s best known for his work fronting PG tips advertising.
Monkey Presents Include: Large Monkey, Beanie Monkey's (4 different ones). 2010 Calender, Girders Posters and lots more!
Join Monkey’s ever expanding army of fans at:
Most Famous Monkey Facebook Page.!3C/strong>
Monkey merchandise is available from selected retailers from October including Harrods Ltd, Play.com, Tesco, Sci-Fi Warehouse Direct Ltd, Forbidden Planet Limited, Express Gifts Ltd, HMV, Asda, New Look, Amazon, Madam Tussuad's Group and Calendar club.
Comic Relief works all year round trying to make its vision – of a just world, free from poverty – become a reality.
Comic Relief is a registered charity no. 326568 (England/Wales); SC039730 (Scotland)
I have an Amazing Competition just for you!
You can win a Whole Hamper FULL of Fabulous Monkey Goodies! Worth around £50!
Your Hamper will include:
A Medium Monkey
A Monkey Card
A Monkey Calender

It's going to be a quick competition to try ensure you get your prize in time for Christmas. Its so easy to enter! You don't need to be a blog follower to enter!

Posted by Christine Taylor at 08:22