Mookie Toys - The Whirlee Ride On 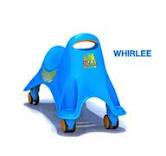 The Whirlee made by Mookie Toys is a fab new ride on toys that has 360 degree caster wheels which allows the toy to spin and whirl around. It's aimed at children aged 1 + . Ryan is 15 months now so this was the perfect toy for him to try out. It's very practical, stack able and very lightweight - weighing just 865 kg. It's perfect for using not only at home but anywhere as it can be popped in the boot of your car and taken with you where ever you may go. I love the little pictures that are on the side and the front of the Whirlee, they're so cute and very decorative. Theres Super Fast flying jets on both sides and a sweet little spinning propella picture on the front. My favourite sticker has to be the sweet little frog on a parachute stuck on the back though - im guessing he's had a lucky escape from Ryan's fast riding fun.
The Whirlee retails from just £19.99 which is a great price for such a fun toy. Ryan loves it! He can easily climb on and off himself as it's not too high of the floor for him to do it by himself. He can pushes himself along quite happily. He's not so keen on the whole spinning part yet as he's still a little wary of it but I'm sure he will be exploring that fun feature a little later on. There's a fab little built in handle for them to hold onto so that if they do want to spin, they will be able to hold on safely.
Here's a few photo's of Ryan having fun on his little blue Whirlee: 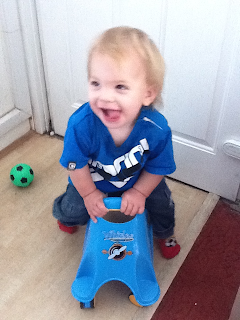 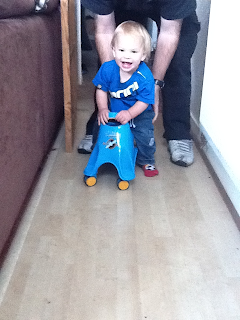 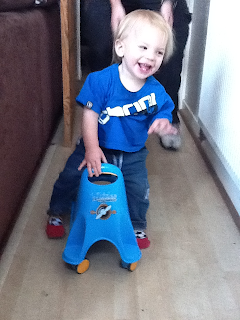 I gave the Whirlee a very deserving 4 out of 5. I love the lightweight aspect of it and think the size is just perfect.The only reason it didn't give it a full 5 is because of the 360 degree spinning wheels which move a little fast for Ryan. Ryan's not quite big enough yet to enjoy the spinning aspect but who knows, give him a few more months and he may become an expert at it.

If you have a Whirlee,why not let me know what you think of them and if you haven't, we'd definitely recommend them. If you have an adventurous toddler in your house, this could be just what your looking for this Christmas.
Posted by Christine Taylor at 05:28