Samsung News From The EuroGamer Expo!

Samsung News From The EuroGamer Expo!
Hey there, I just had the most Awesome day at the World Gamers Expo at London's Earl's Court! The crowds was large, the gamers were serious and the battles were on. Games Exclusives overloaded in ever area of the event. Battlefield 3 previews and Call Of Duty - Modern Warfare 3 highlights. I've never been to an event quite like this one but i had an Amazing day.

Samsung had a Huge stand. Pretty impressive if i may say. So many fab products in one place. They had tabs, to pc's. Laptops and Smart TVs. I was in heaven! We had a fab demonstration from a rather nice guy showing us how you can now control your Samsung Smart Tv from their new Tab. The ingenious App was so clever and very practical. We were shown how the Tab could be used as a quick and easy remote and if on the go how you could turn the TV off and then carry on watching your film on the Tab. Amazing! I so want a Smart TV and Tab now. Every girl's dream.
I loved the 3D TVs but the 3D Enhancing Monitors were pretty impressive too. You can enhance gaming or watching TV to a whole new depth. Amazing picture quality and Awesome colours. I so need one of these. God,i wanted everything!
The Samsung Galaxy S2 was also featured on the stand. Asphalt 6 was loaded on a few of them ready for gamers to play. Highest Scorer each day would win their very own Galaxy S2 in White - Wow.
There was some serious game playing going on trying to win one of those. Whilst I'm talking about prizes Samsung had a fab gamers area set up with beanbags,3D glasses and a whole 3D Samsung Entertainment package ready loaded with Tekken to battle it out to enter their free prize draw to win the lot! I played against my other half who wasn't too impressed when i won - whoop whoop! Go me,i beat him - only by 1 round tho lol but a win is a win so into the draw i went. Still have my fingers crossed for the prize draw now ( x )
There was so much going on at the Euro Gamers Expo that i could sit here writing all night, I'm not gonna do that tho. I do say however if you get the chance to go to next years event i deffo would. The atmosphere was electric, gamers were so friendly and helpful. So many new and exciting games and products to check out and so many of your favourite characters to be met. I had to go see Mario lol He's always been one of my faves!
So to wrap it up, Check out my Photo Collage and maybe you'll see just a small glimpse of what i saw. An Amazing day! Truly Enjoyable.
﻿
﻿ 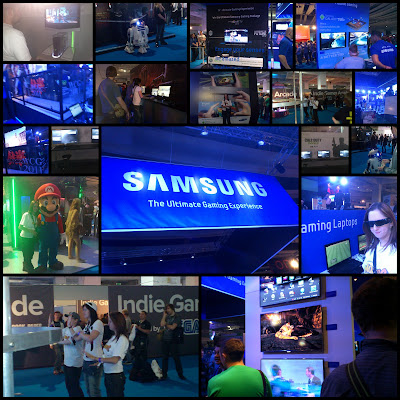 Posted by Christine Taylor at 12:33