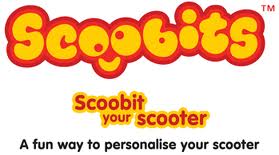 " Scoobits are a fun range of colourful characters that children can strap onto to their scooter or ride-on, one on top of another, making them their own. Scoobits personalise scooters, helping them to stand out from the crowd on the school run and in the playground. "
They appeal to both boys and girls aged three years and over, Scoobits come in a range of different designs and colours to collect, so your kids can even swap and trade them. Quirky little characters including a busy bee, a clumsy penguin, an adventurous dragon and cool shark which all simply attach to the scooter and hold firm thanks to its clever badge and strap design. Made from tough, durable 100% silicone, Scoobits do not contain UPVC and are safe, soft and squidgy for little fingers. 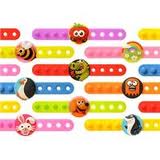 I was sent two Scoobits,1 for Ryan in a boys design and 1 for Lily in a girls. Lily loved it, it's cute and bright and was easy to put onto her scooter. Simple pleasures lol  The bright colours are very clever, they put a smile on my kids faces. There's a fab range of designs to choose from, something to suit everyone. Lily loves her pretty pink Scoobit and Ryan quite likes his too. He can't quite say that himself yet as he's only little but the fact that he's not pulled it off yet is a very good sign.
Here's the scooters in my garden now. They look a little lonely at the end of the day. 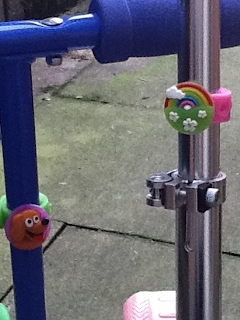 Scoobits can brighten up even the oldest of scooter or bikes, why not give them a try too.
Posted by Christine Taylor at 12:27