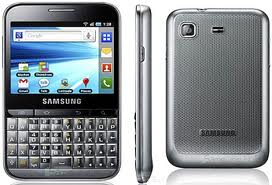 Samsung has a new Android Smart phone out called the Galaxy Pro. I have been given one from Samsung as part of our Mobilers Programme  to try and test and over the past few weeks i have done so. I have been using it as my main mobile phone to see how it gets on. IL give you the Facts first and then give you my opinions Second.
The Full Specs: 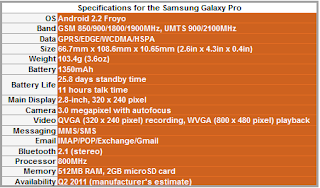 The Galaxy Pro is run on Android 2.2 Froyo and it has a candybar-QWERTY keyboard.The Galaxy Pro has 2.8-inch touchscreen display and a nice 3-mega pixel camera with auto-focus and video recording abilities of 30 frame per second. It's Battery Life is up to 11 hours of talk time.
About the connectivity, it has Wi-fi, Bluetooth and Samsung’s Social Hub Premium Software which are all integrated with various social network site. Which of course include both Twitter and Facebook! ActiveSync will provide Galaxy Pro users with 150,000 applications, ready to download!
Galaxy Pro supports latest 10.1 Flash, Google Maps with Latitude, and A-GPS.

OK so you've seen the Facts,now for what i thought. The Samsung Galaxy Pro is the Android version of a Blackberry phone to me,it is designed in the same way that they have done theirs. This phone does have slightly bigger keys than my Blackberry Torch had which makes it easier for people with bigger fingers to use. If you do a lot of texting and tweeting on Twitter like i do,then this a good basic phone to have.
I say basic as its a very simple phone, Easy to use and great for beginners or people who want a lower budget phone. Even though it has a very simple,yet lightweight appeal to it,it does however have all the functions of any other Android Smart phone. You can have easy and fast access to the Internet whilst on the go.
I have to say i quite like this phone,it looks great with its silver and titanium case. Its lighweight so i don't feel like I'm carrying a brick lol and its easy to use the Internet on which is what i spend most of my time doing!
So if you are looking for a Android Smart phone with a Qwerty keyboard that won't cost you a small fortune then this is definitely the phone for you!