Arm & Hammer have launched the new "My Way" Spinbrush to make tooth brushing fun for kids! It's designed to appeal to children’s love of toys and gadgets and allows kids to put the fun back into tooth brushing. Both boys and girls will love the colourful design of this battery powered toothbrush, which comes complete with customising features such as a removable head and battery cap, a unique ‘Gem’ on-off button, and over 141 decorative stickers so that your child can really make the brush their own. The Spinbrushes come in a wide variety of designs and cost just £5.99 from your local Boots store.
My girls can be a pain when it comes to brushing their teeth. They never want to do it so i always end up standing over them to ensure that they do. Its not much fun so when i was kindly offered for them to try out these new Spinbrushes i jumped at the chance. I was dying to see if they would get my girls interested enough to start brushing their teeth by themselves.
My girls were very excited when they arrived,both had huge smiles on their faces. So excited in fact that they wanted to get started as soon as they saw them which explains why they have their PJ's on in the photos lol. 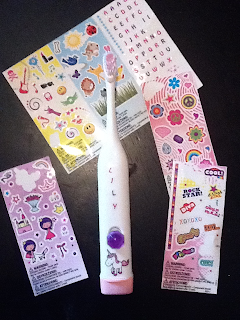 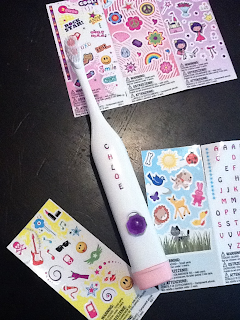 Both started by putting their names on their own Spinbrush so they didn't get them mixed up. They wanted them to look a bit the same so they decided to put their names down the front in the same way lol There are so many pretty stickers to choose from, two of each letter,one in pink and one in purple. Rainbows and fairy princesses. Animals and funky patterns. Such a fun choice!
Both Chloe and Lily had a lot of fun decorating their new Spinbrushes and were very excited to then try them out. There was lots of stickers left over so I'm sure they will be re-designing them soon. I was amazed they both went upstairs and brushed their teeth by themselves :O I was very proud. We've only had the Spinbrushes for a few days but already they love them. They've used them everyday without even being told too. They've actually asked me if they can go brush their teeth. Its great and makes a fab change in my house.
For the small price of just £5.99 i can gladly say that they are well worth every penny. We love the new Arm & Hammer Spin brush and would recommend them to everyone. If you have trouble getting your children to be excited about brushing their teeth like i did,then these would be a great idea for you. I will leave you with the photos of my girls having fun decorating theirs. 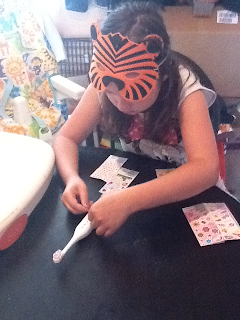 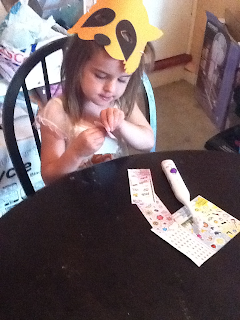 Posted by Christine Taylor at 02:37