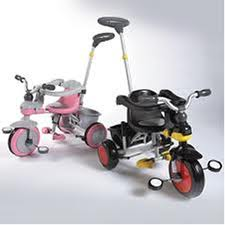 The very generous people over at TipppieToes have given me on of their Boost Trikes for my Little man Ryan to test and try. We were very excited when we got this lovely offer as it would be Ryan's first trike and we was looking forward too seeing his reaction. The Tippitoes Boost Trike has been designed from early use all the way through to full on toddler hood. It was both the Winner of the Bizziebaby Bronze Award (Bizziebaby) and Winner of the Best Value 2010 Award ( FQ Magazine )
There is a lovely Pink and Grey one for girls and a Black and Red one for boys. I was sent the Black and Red one as seen above which was perfect for us,daddy thought it reminded him of a little knight rider trike and was very pleased. It was very easy to assemble and didn't take long so Ryan was soon in his new trike in no time. 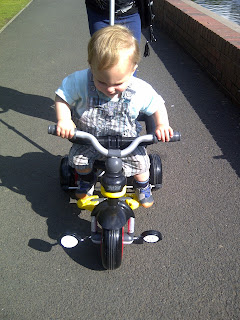 The Boost Trike comes complete with an adjustable push handle bar which is great for everyone as i often lower mine so my daughter Chloe can push him.It has a robust baby surround to stop him climbing out or falling off and little yellow foot rests for the aid of younger riders needing the parental assistance. Once children can pedal for themselves these items can be removed to give the child a more independent journey where they can pedal for themselves. It does have A brake for safety of course and a clever pick up truck like basket for utility. Ryan stores his water bottle in there lol Last major thing is it has a nice cushioned seat to keep our children comfy on their journeys. We use ours for walks to the park,shopping trips and even on the school run most mornings. It's lots of fun. Ryan really loves it. When i say park visits i mean our local Sutton Park which is a huge place and has all sorts of ground surfaces. Grass, concrete paths and lots of bumpy off road woodlands. 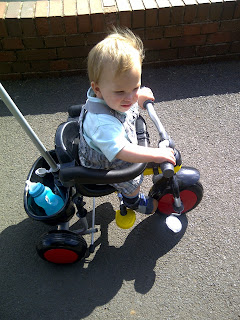 We've been over it all and had no problem on any of them. The only thing i would say that it does not have that i would have liked is maybe a seat belt. Ryan has the tendency to try and climb out if we stop for to long. The surround bar does help to stop him but a seat belt would make me feel that he is a little more secure. This product is officially aimed at children over 18 months which maybe he won't need a seat belt by then, seeing as he's a little under that age at the moment. This lovely trike retails at a great price of just £59.99 which i think is very cheap and worth every penny. Also you get Free Delivery when you spend over £29.99 on their online store which is a bargain. Ryan loves his rides out in his trike,he looks like he enjoys every minute and when were not out and about he likes to push it around the house himself , bless him. TippieToes sell lots of lovely products from Pushchairs to beautiful bedding and even toys and feeding equipment. There's something for everyone. If you're looking for a trike i would definitely recommend this one as it really is fab quality and looks great. I can see Ryan will be making good use of his over the next 2 or 3 years. We give this trike a big 4 out of 5,i think if it had featured a seat belt or a safety harness of some sort then it definitely would have gotten a 5. Ryan gave his new Trike a big Thumbs Up!
Posted by Christine Taylor at 03:59