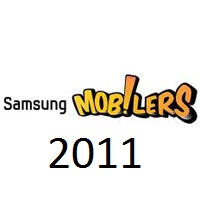 Samsung Mission 1 - Andriod vs RIM
Hi there and welcome to my first ever Samsung Mobilers Mission.Mission 1 is to compare ANDROID to it's rival RIM. I'm not sure how much you know about the two but lets start and hopefully by the end,you will all have a good idea about them both! 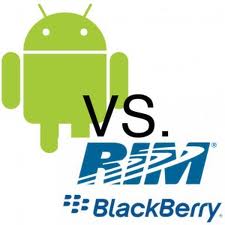 OK so what are they? ANDROID is the software that constantly runs on the phone, managing its more basic functions and supporting any apps (applications) that are run on top of it and RIM stands for Research In Motion which is the company that makes Blackberry. It's a similar kind of OS but for a different brand.I have had a good look on the Internet and a good play with both my Blackberry Torch and my new Samsung Galaxy Pro too see what i thought of the two. Both have the Qwerty keyboard which is fab for quick typing and makes it easier when being online for e.mails and social networking sites like Facebook and Twitter which you all know i use an awful lot.
The general feeling about the two is that Android is apparently liked by social users who like to customise their phones for a more personal touch whilst RIM is used a lot more by businesses. I hear that a lot of big companies like the NHS and even my partners work place do use Blackberries as their employee works phones as they are great for e.mailing and working whilst on the go.Also Blackberry has the BBM ( BlackBerry Messenger ) which allows you to message anyone who is also using a BB handset for free.
I see alot of school children now use BB's as the BBM is a great attraction for them,they can message their friends when ever they like and it doesnt cost them a penny, well it does kind off because when i set up my Blackberry Torch i had to add a Bolt on which cost me £5 a month too access the BBM on my phone. £5 isn't a lot of money but it does cost so technically it isn't free.
My Samsung Galaxy Pro has Samsung Messenger which is practically the same thing tho and there is an App ( application ) called What'sApp which all Andriod users can download for free which also does the same as BBM and it is free to use!
So for best useage for both business and social i would have to say i cant pick either as a clear leader.  Most people would say RIM i guess but i have to say that the newer Android phones are just as good now so it's a really hard call. Both Android and RIM have their pros and cons but I'm gonna try and work out which really is best for each area I'm gonna cover.

This chart simply shows the number of Apps that are available from each of the current providers. This  chart is quite dated as it shows the numbers from March 2011 but i have been told that the current figures from March 2011 are : Android has 200,000 Apps and RIM has 35,000 Apps which is quite far apart really. And the next chart will show how many of the Apps are free and how many you do have too pay for. It clearly shows that Android have a much higher percentage of Free Apps compared to RIM. 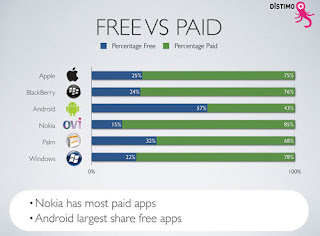 So App wise Android definitely wins without a doubt having not only the highest number off Apps available to download but also by far having the most Apps that are free! I have downloads quite a few apps now onto my Pro which is an Android run phone and i haven't had to spend a penny. I love playing games and watching movie clips and even watching TV on the I-player which were all free.
Last but not least i wanted to have a quick look at their phone handsets and how easy they are to use. Android is used on handsets like my new Samsung Pro and my partners HTC Desire where as RIM is only on Blackberries which include my Blackberry Torch which is one of their higher quality phones or the Blackberry Pearl which is one of themore basic, cheaper ones. I used to love the cheaper BB's as the Qwerty keyboard with touch screens was a favourite feature of mine as i love texting and browsing on the Internet ( on Twitter mainly ) but now i have my Pro i have too say I'm more than happy to give up my BB. Both have cheap handsets which are available from around £129.99 and then  more expensive and more complicated handsets which can set you back over £300. I think quality wise i would have to say i do prefer Android phones as i like to personalise mine to make it easier for what i want to use it for,it just saves me so much time later on. I also found my Android based phones are much easier and quicker to set up when you first start. Android just sent me simple messages to add all my set up information onto my new handset whilst with my Blackberry i had to install their software onto my laptop to do it all through there.
So overall i have to say that Android is the winner in this fight! It has the most Apps,the highest number of free Apps and the easiest to use handsets. It has some great features and some real time saving assets. Go Android, lol.

I really feel like i've learnt a lot on this Mission and i really do hope that you might have learnt something new too. Or maybe its helped you to understand a little more about what things are in the Mobile world. I sometime feel taht people can say things in terms that i don't understand and can get easily confused so i promise you that i'm going to try and keep this as simpl as i possible can. At the end of the day,i'm learning just like you. Please do ask any questions if you have any and i'l see what i can do. Until the next Mission i'l say Good Bye and Thank You so much for even taking the time to read all this.

View My Stats
Posted by Christine Taylor at 14:43