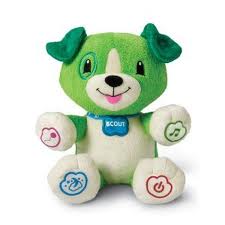 This is Scout. He's an Amazing toy from Leapfrog which was sent to me for my 10 moth old son Ryan to review. I was expecting just the usual push a few buttons and i make sounds teddy but boy was i wrong. This one was totally awesome. The teddy is so cute ans soft which is perfect for little people to safely play with and he has 4 buttons,1 on each paw and 1 on each foot. Scout has one big difference from other talking teddies,you can connect him up to your home computer and change the things he says to your child. You can add their name, their favourite food,colour and even pet! It's so much fun. You can change the music and lullaby's it plays too. 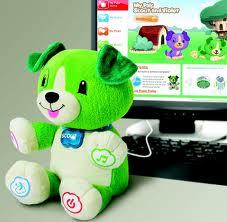 We changed the name to Ryan,The colour to Red. His favourite food now says chips lol and his favourite animal is a Dog. I love the way it talks,its so cute. It says "I love you Ryan" in such a sweet voice,we giggle every time we hear it. My favourite thing about this bear is the nigh time button on his left foot. It has three options : 2 minutes to bedtime. 5 minutes to bedtime or 10 minutes to bedtime .I think who ever thought of this is a genius as its solved all my night time troubles.
Ryan likes the sound of his cot mobile when he's going to sleep but it only lasts for 2 minutes and then stops which means i then have to keep getting up and re-winding it to make it play again. Now i just press Scout's paw 3 times and he'll play soft lullaby's for a whole 10 minutes and then turns itself off. Its great!
Ryan loves his new Scout very much,it's like his new best friend. I took a pic of them together the other morning,it was quite early though lol Bless him x I would defiantly recommend this toy to all parents of children aged 6 months plus as its so sweet and a lot of fun. 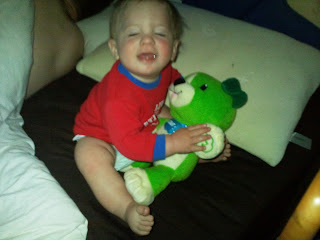 Scout helps to teach  your child :
- First words
- Daily routines
- Early number sense
- Feelings and emotions
- Animals
They retail at £19.99 which i think is a very reasonable price for all the fun it brings.You can buy him in green for boys and purple for girls.
www.leapfrog.com have a great range of other exciting toys you can purchase too.
﻿
Posted by Christine Taylor at 05:25