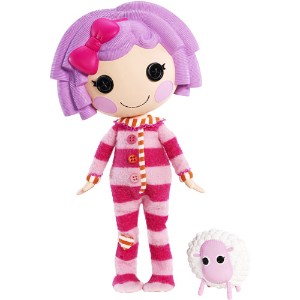 This is a Pillow Featherbed, she's a Lalaloopsy doll. Isn't she lovely! She was born on January 3rd ( Festival of Sleep Day ) and was sewn using pieces of a babies Blankie. She loves good stories, long naps and her favourite snack is milk and cookies! She also comes with her pet sheep.
At first glance i though she was a little unusual as she had a gorgeously dressed body but then had a rather large,hard head. The pink and purple pyjamas are so soft and snuggly! I think i actually quite like it now though as it's very different to any of the other dolls that Lily has got. I gave this doll to Lily who absolutely loves her and has shortened her name to just "Lala" which is so cute. Lily has made Lala a nice comfy home in her bed where she now lives quite happily. Lily loves her sleep time cuddles and reads her stories to Lala every night before bed. Its been 3 weeks now and Lala is still in her bed which is the longest any doll has been there as Lily gets bored quite quickly and changes her sleeping toy all the time. So far Lala is doing well!
Lalaloopsy dolls retail at around £24.99 which isn't too bad as i have paid up to £35 for some of the dolls she has had before. There is a whole world for these dolls over at www.lalaloopsy.com where your child can interact with their doll and do so much more!
Lily loves Lala very much.Here's a pic to show you just how much,lol. 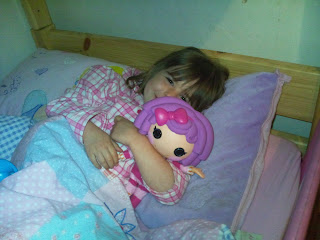 A huge thumbs up from Lily and i think I'm going to have to agree on this one.Any doll that Lily hasn't lost interest in straight away is a big success in my house.So we gave it a whopping 5 out of 5 from us! We Love Lala !
Posted by Christine Taylor at 04:58