Be careful what you write on some Facebook walls!

Please Be Careful What You Write On Peoples FaceBook Walls.

On March 7th i innocently wrote a comment on the womans own magazine facebook wall.It had asked what my favourite gadget was and said "Post your top tip below and the best 20 will be printed in the magazine" so i did.This is the exact comment that i wrote:

Christine V Taylor My hot buy that i would defiantly recommend too everyone is my Tefel Acti-Fry.I got mine on sale in Currys for £107 and I'm so happy with it ♥ Its amazing.Chips in my house have never tasted so good. My girls have learnt that chips come from potatoes too lol but that's another story hehe

Today i was handed a copy of this weeks Womans Own mag from a friend who said,have you seen this?
On page 37 there it was.A photo of me and a comment under Tried and Tested.I was in total shock.Where had that come from? I checked back to the facebook wall and remembered i had left a comment but this was out of order and i was fuming.How had they got my photo and why hadn't they asked me? Even worse was the article,none of what was said was my words! I was so angry at them.They have taken my Profile picture from my Facebook account without even asking me and they had changed the comment to push sales for their own benefit. 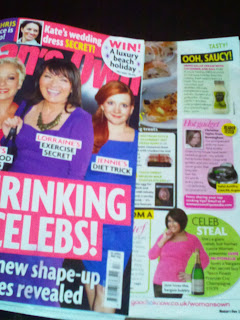 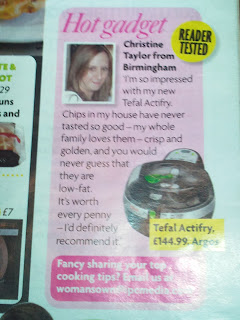 I remember when i bought my Acti Fry i only bought it because it was in the sale and cost me £107 from Currys which i had wrote in my comment.I do love using it but i know i wouldn't have paid any more for it as a mother of 3 i know i couldn't afford it.I'm so annoyed that they have advertised Argos and their price of £149.99 and said that i was happy to pay every penny - which i had not!
They have completely changed my comment that i had originally left on their facebook wall into their own,Its their words now and not mine.
I have sent them an e.mail wanting to know why this has been done? As i have now lost complete faith in their magazine and all their other Tried and Tested stories as how many other people have they done this too.None of them could be true which is a big let down in my opinion.
I have checked their Facebook Page for any hidden terms and conditions but cannot find any.No where does it state that they could tale my photo without my permission or edit and change my comment to suit themselves.
I am so angry with them right now that i had to write this just to get it all out.
I will be careful what i comment on in future as i think this is totally wrong that they can do this.Being such a big name magazine as well i am very disappointed now.
I shall have to wait until they reply to my e.mail now and see what they have got to say but my main issue here is that they took my photo and stuck it on a comment that is not my words.
I'm so annoyed as its telling people Ive said something that i haven't.
Its so unfair.﻿
Posted by Christine Taylor at 12:04