RedLetterDays Extreme Dodgems Day
I was lucky enough too win an Extreme Dodgems Day at Birimgham Wheels from the lovely Red-Letter-Days On Facebook the other week.I won on the Friday afternoon but the prize had too be used the following morning at 9am which was a bit of a tight squeeze.I couldn't go as i don't drive so my OH jumped at the chance to go as its something he'd always wanted to try and seeing as it was so local he couldn't wait.
It was too short notice to get anyone too mind the kids so he had to go on his own whilst i stayed at home with the kids.He sent me a picture from his phone but only 1 I'm afraid as the rest of the time he was to busy driving or watching the others drive.When he got home i asked him all about it and this is what he said.
First off he was told to be there by 8.45am so that they could start promptly at 9am but they didn't get started til past 10am as they waited for a stag party to arrive so he was a little fed up after the wait,especially being there on his own.He said there was a long safety briefing and then they got too do a practice which sadly only lasted all of 10 minutes.He was so excited to be driving these fantastic dodgem cars but was a little disappointed with the actual short amount of time he got to drive.He was there from 8.30am until 12.30 pm which was a whole 4 hours and out of which he said he drove for maybe 35 minutes of it.He said there was a problem with many of the cars and they had too keep stopping and waiting whilst they were being fixed which again was very boring for him as he had no one too talk to or keep him company during his wait. 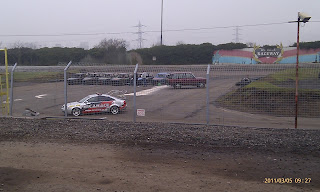 ﻿Overall he said the driving was fab,he loved the speed and the adrenaline rush he got from racing around the track.He just wished he had someone he knew with him as he got really bored on his own.He would have enjoyed the whole day a lot better if he had his friends there so if you are thinking about doing a racing experience day for you loved one i would recommend that you go along to cheer them on or buy 2 tickets so they have share the experience with someone else which will make the day a whole lot more fun.
Thank you to Red Letter Days for giving my OH the chance to try this experience as he did have a good time and can now tell all his mates that he has tried Extreme Dodgems.
Posted by Christine Taylor at 13:24